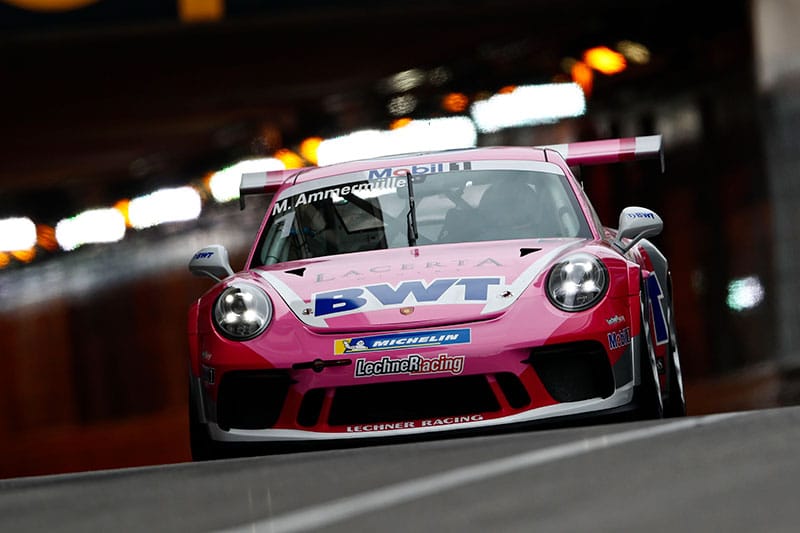 Reigning champion Michael Ammermüller secured his first pole position of the 2019 Porsche Mobil 1 Supercup season as he set the fastest time around the streets of Monte-Carlo.

With a time of 1:34.963, the German took his BWT Lechner Racing car to the top of the timesheets, 0.110 seconds ahead of an impressive performance from Dinamic Motorsport‘s Mikkel Pedersen.

“Position one on the grid on this narrow street circuit is especially important in Monaco.” said Ammermüller.” Overtaking is notoriously difficult here.

“Because there were so much traffic out on the track, I could only manage one flying lap. This makes me all the more thrilled with the result,”

It was a challenging qualifying session around the narrow streets of Monte-Carlo, (which sports car star Nick Tandy previously likened to driving a Porsche through an multi-storey car park) with a temperature of 18-degrees Celsius and a slightly damp track.

Despite the conditions all of the 28 drivers chose to start the 30-minute session on slick tyres, and as the track dried out the times started to tumble.

Halfway through the session it was the impressive rookie Ayhancan Güven who was leading the way before a frantic battle for pole position broke out in the closing stages.

“I think I could have managed even a little more, however the qualifying showed me that I’m fast. For this reason, I’m heading into the race feeling confident and I’d very much like to improve,” said Pedersen.

Florian Latorre settled for fourth place ahead of Dylan Pereira and Güven, who was the best placed rookie driver.

Championship leader Julien Andlauer was left in a disappointing seventh place after the session was ended early due to a crash blocking the circuit, disrupting many drivers who were setting their fastest laps at that point.

“To be honest, I’m a little disappointed. My last lap was really good, but then another car was involved in a collision, the red flag came out and I had to abandon my attempt,” said the Frenchman.

Porsche Junior Jaxon Evans ended the session in twelfth place as he makes his track debut this weekend.

“Driving is Monaco is a totally new experience for me. It’s a huge challenge to get the timing right without coming up against slower vehicles. Unfortunately I never quite succeeded in doing this. My main focus for the race is on the start,” said Evans.

The best grid position in the Pro-Am classification went to Roar Lindland ahead of Nicolas Misslin and Philipp Sager.

Pereira leads the way as Supercup heads to Austria