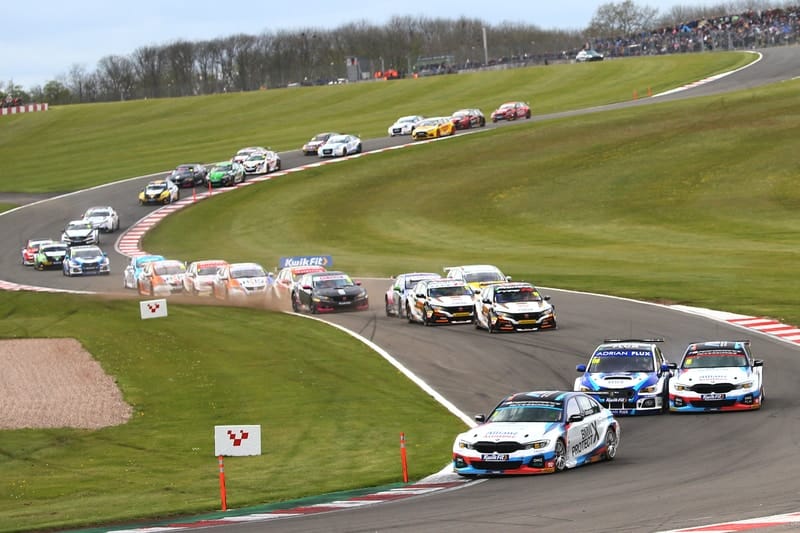 In what is to be the first of two visits to Thruxton this year in the Kwik Fit British Touring Car Championship, The Checkered Flag looks ahead to the fastest track on the calendar and picks out ten drivers to look out for in this weekend’s action.

The criteria for selection comes down to last race weekend performance and previous results at the circuit they’re heading to. Therefore the same names will probably keep cropping up preview after preview but hopefully with the unpredictability of the championship there could be one or two surprises.

Also, with pundits and commentators alike being afflicted by a certain curse whenever they praise a performance or predict a certain result, hopefully none of the drivers listed here suffer incredible misfortune.

With the terms and conditions out of the way, lets get the road on the show and take a look at your somewhat safest bets for success this weekend in Hampshire.

It was a given that the current reigning champion would be listed here and why not, he’s already doubled his 2018 race win tally in just one weekend with the “new” BMW 330i M Sport. With the car getting more and more into the Northern Irishman’s groove it’ll be one of the cars to beat this weekend.

Colin’s 2018 season practically started to come together at Thruxton and with the “old guard” being the drivers to beat against the youngsters, Colin will be out there to keep up his winning feeling.

I’ve said it before and I’ll say it again. Ash is the best all rounder currently in the BTCC and with the Subaru Levorg GT enjoying a rare strong start to the season, he’ll be right up there as a favourite to double up his BTCC title tally come the end of the year. However, Ash in the Subaru hasn’t had a top five finish at the Hampshire circuit and it’s a duck he’ll be wanting to break in order to convince that he means business.

Already admitting that it’ll be tough to be competitive with maximum ballast, if one driver is able to keep out of trouble and remain consistent, Ash is your man.

Both Matt and his teammate Dan Cammish have had so-so starts to the 2019 campaign and with early season promise the opening rounds have been a disappointment. However, Matt deserves inclusion on this list due to the fact he took the first win for the FK8 Honda Civic Type R at Thruxton last year whilst also breaking the qualifying lap record. Experience and the usual well prepared Team Dynamics cars are an ominous proposition and Matt will be making amends for a 2019 of ups and downs so far.

People just assumed that the “flukes” that Jake enjoyed at Brands Hatch were down to the mixed conditions but the twenty-five year old has proven this wasn’t the case at Donington Park with incredible battles through the field to take two strong top ten finishes and keep him within the top ten of the overall drivers championship.

The data from the Honda’s next door is definitely a factor but you cannot underestimate the talent that Jake has. It’s been great that it has finally been realised on track. Thruxton will be the final major test to show that the Audi S3 Saloon is finally reaching its sweet spot.

Second in the championship but still yet to hit the consistency sweet spot, Thruxton might see Josh and the FK8 Civic Type R becoming the combination to beat for reasons mentioned in the paragraph for Matt Neal’s inclusion to the ten drivers to watch out for. Josh took his second victory of the season at Thruxton last season and with the BTC Racing team seemingly enjoying a renaissance it’ll be tough not to think that the number sixty-six car wouldn’t be mixing it at the front.

Silly incidents will ultimately be the undoing of what has been a good start to the season so keeping a calm head and driving smart will bring in the results craved.

Running away with the Jack Sears Trophy lead after taking honours at both Brands and Donington, it’s an understatement to say that Rory Butcher has taken to the FK2 Civic Type R like a duck to water. Even if it seems things haven’t gone to plan, he quietly gets about his business of scoring well and he has been enjoying fantastic results so far this year. Another race victory this weekend might be on the cards but you can be sure that he’ll take Jack Sears Trophy honours again.

Whilst the BMW 330i M Sport has jumped out of the blocks with three wins already under its belt. Last season’s championship runner up Tom Ingram now has the first victory for the Toyota Corolla GT sewn up and with this undoubtedly being a developmental year, he can be pleased with the progress made by the family run Speedworks Motorsport squad. Whilst it’ll be unlikely for a repeat victory at Thruxton, he may make progress and score well. The Corolla seems strong and we expect to see the best of the car later in the season.

Rob Smith had an excellent weekend at Donington Park, really taking the ageing MG6 GT into battles and positions that the car shouldn’t really have been in. Incredibly close to scoring his first points this has been a stellar effort by the new team and driver. Rob has managed to keep out of trouble so far this season and both he and the team will be rewarded this season with some good points.

Involved in the Andrew Jordan incident during the first race at Donington, people didn’t really pay too much attention to the fact that Collard scored three top tens and obviously a podium in the final race. People questioned whether Rob could mix it again in the top ten following his concussions but Donington proved that he hasn’t lost his touch.

Rob’s penultimate win was at Thruxton so he does have a good track record but it’ll remain to be seen how he’ll do with a front-wheel drove car.

Qualifying hasn’t been the strong point of the 2019 season for Adam however on the Sunday the Mercedes Benz A-Class turns into a completely different beast and he’s enjoyed some good points. With victory in the reverse grid race at Thruxton last season, the car has proven itself to be a strong package at this circuit and it’ll be interesting to see whether he can push on and maybe enjoy a much more successful qualifying session to give him the best chance for more on the Sunday.

The BTCC returns this weekend 18/19 May at Thruxton where qualifying will be live on itv.com/btcc Saturday and all three races shown live on ITV4 on the Sunday.