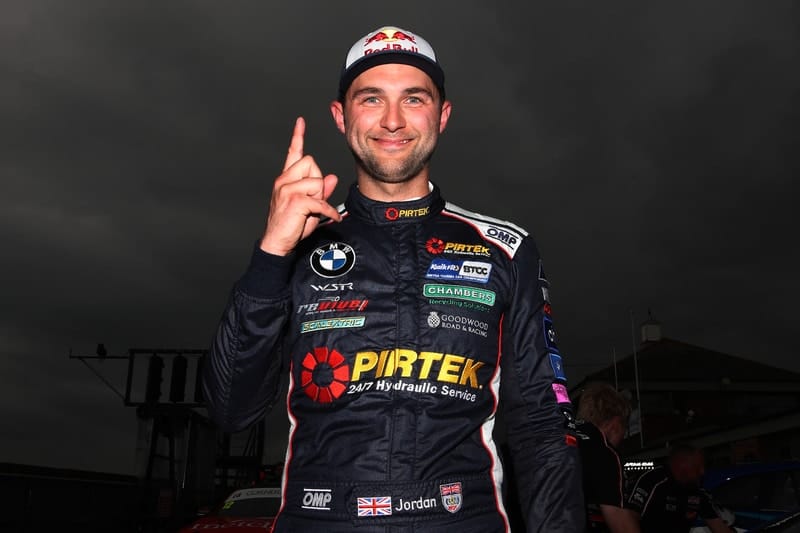 With mixed conditions ahead of the race start, the first race at Croft for the 2019 Kwik Fit British Touring Car Championship saw relatively safe conditions and a strong lights to flag victory for Andrew Jordan.

Despite making his fourth victory of the season look easy, Andrew was often seen weaving down the start finish straight in order to get heat into his tyres. Despite this, he had enough of a gap between himself and second place finisher Chris Smiley before and after safety car interventions.

Tom Chilton finished third and kept Smiley on his toes throughout the race whilst also keeping the squabbling Team BMW duo of Colin Turkington and Tom Oliphant behind.

The first safety car was called following an incident packed series of events where, first, Ollie Jackson hit one of the polystyrene barriers at the exit of Sunny Out. Jackson would eventually retire behind the safety car when his Ford Focus RS went straight on into the gravel trap at Clervaux.

Then Rob Collard went hard into the barriers at Sunny Out and he was unable to get his Vauxhall Astra moving again. Nicolas Hamilton spun off at the same corner in sympathy which meant a safety car was inevitable.

Racing to the line, Tom Oliphant tried a robust move on his illustrious teammate Turkington through the complex and the two cars touched. Thankfully for West Surrey Racing, both cars remained unscathed.

Dan Cammish quietly got on with the business of finishing sixth ahead of a battling Ashley Sutton and Jason Plato. Josh Cook had an incident packed race to ninth. Cook would eventually stop his car when the flag dropped due to a puncture.

Matt Neal rounded out the top ten following two fantastic moves on Jake Hill and Tom Ingram through Sunny In during the closing laps.

Outside of the top ten, Stephen Jelley jumped to thirteenth despite an incident at the final hairpin with Aiden Moffat which saw the Scotsman tipped into a half spin. Rory Butcher went from last on the grid to eighteenth and Jack Goff was the best of the Team HARD Volkswagens in seventeenth.