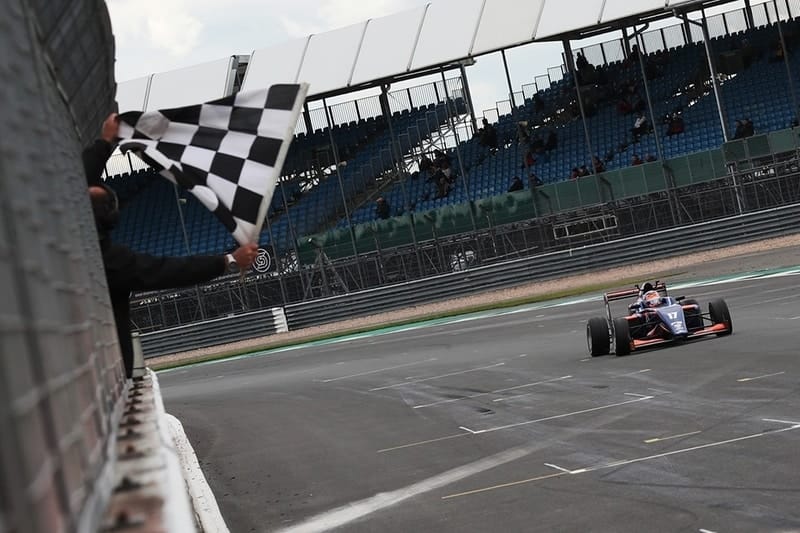 Clement Novalak took a dominant victory in race one of the weekend for the third round of the 2019 BRDC British F3 Championship at the Silverstone GP circuit after beating Ayrton Simmons by two-seconds in the ten lap race, with Neil Verhagen a further three-seconds further behind in third. Novalak’s second win of the season now gives the Carlin driver a 57-point advantage over his nearest rival Johnathan Hoggard ahead of races two and three tomorrow.

The race began in drying conditions with Novalak using his pole position starting slot to dart into the lead as the pack headed into Corpse corner on the opening lap, with Simmons, Verhagen and Kaylen Frederick all holding track position in the opening corners of the race. But further behind, Kiern Jewiss got a blistering start and the Douglas Motorsport driver made an inspired start to move up to fifth position by the time the cars exited Beckets on the opening lap of the race.

Then further around the lap, Frederick ran wide through abbey which gifted Jewiss fourth as the American dropped down to seventh place after he made a costly error by getting onto the wet part of the road down the International pit straight.

As Novalak was scampering up the road in the lead of the race, Verhagen forced his way alongside Simmons coming out of Luffield, which meant that he was able to get a perfect slingshot down into Corpse corner at the beginning of lap two. Behind them, Jewiss was able to maintain fourth place ahead of Manuel Maldonado, Hampus Ericsson, Frederick, Benjamin Pedersen, Nicolas Varrone and Sasakorn Chaimongkol, who completed the top ten.

But while Novalak continued to build his lead, gaining another nine tenths by the end of lap two, Simmons fell back from challenging Verhagen to defending against Jewiss, who was determined to get a good result out of the race, and was already looking for a potential podium on lap three. Then just behind, Ericsson was able to make his way past Maldonado, with Frederick passing the Venezuelan racer just a lap later.

After starting from a lowly seventh on the grid, championship protagonist Hoggard was making steady progress and soon found himself inside the top ten as Hillspeed debutant Varrone was forced to pit from ninth after picking up damage while getting his teeth stuck into some midfield battles.

But he wasn’t the only one, as Pedersen was easily passed by Hoggard, Nazim Azman and Ulysse De Pauw, which demoted him to twelfth and forced the American to take refuge in the pits for suspected damage shortly after. This was after being passed by Josh Mason at village the lap after, with any suspected damage was made worse after Pavan Ravishankar’s attempt to slide up the inside of the American at the same time resulted in the Singaporean racer spinning right in front of him, with the pair making contact in the process.

Up at the sharp end, after contending with a feisty Jewiss for a few laps, Simmons found his groove and set the fastest lap of the race on lap four to pull clear of the Douglas Motorsport driver in his bid to catch Verhagen for third place. And while Jewiss was finding his feet once more, Verhagen was continuing to lose time hand over fist compared to Novalak out front with the gap at almost three seconds.

With Simmons gapping Jewiss, the Brit was forced to go on the defensive with Ericsson putting him under increasing pressure behind heading into the second half of the race.

Lap five saw Novalak lead by the best part of four seconds over Verhagen and Simmons. But after a slow start to the race, the Chris Dittmann Racing driver closed up on Verhagen and managed to pass the American on the wet part of the track around the outside of Stowe corner to take second place from his rival. And despite Verhagen’s best efforts to repass the Brit at Abbey, he could not find the space to force the issue. So as Simmons and Verhagen continued to scrap it out, the chasing pack led by Jewiss closed up on the fight for second.

Further behind, De Pauw managed to pass Malaysian racer Azman for tenth place after a race-long battle between the duo.

And after being forced to go defensive against those behind, Verhagen was forced to drop back from Simmons who showed a dramatic turn of pace in the final four laps of the race, taking two seconds out of Novalak in the last four laps.

But while Verhagen had to be mindful of those behind, Jewiss and Ericsson were very much focused on themselves in the closing stages of the race. And on the final lap of the race, the pair collided as Ericsson went for a dive at The loop on the final lap which saw both of them pick up damage, with Jewiss finish tenth and Ericsson could only hang onto eighth after the duo were locking down fourth and fifth for much of the race.

But their demise was to the benefit of Frederick, Maldonado, Chaimongkol and Hoggard, all of whom moved up two places to finish fourth through to seventh at the end of the race.

But after a dominant performance from Clement Novalak, the Carlin racer took his second win of the season to extend his championship lead to a scarcely believable 57 points over Hoggard who put in a decent recovery drive to gain ten positions on his way to seventh place, with Ayrton Simmons’s second-place finish means that he is only six points further behind in third.

The reverse-grid race will get underway tomorrow morning at 11.10 where Benjamin Pedersen will start from pole position, and after the poleman took victory in the reverse-grid races at both Oulton Park and Snetterton, he will be hoping that he can ensure that particular stat continues after tomorrow.