Tom Williams Blog: I’m proud to be representing the UK as its only British JWRC driver 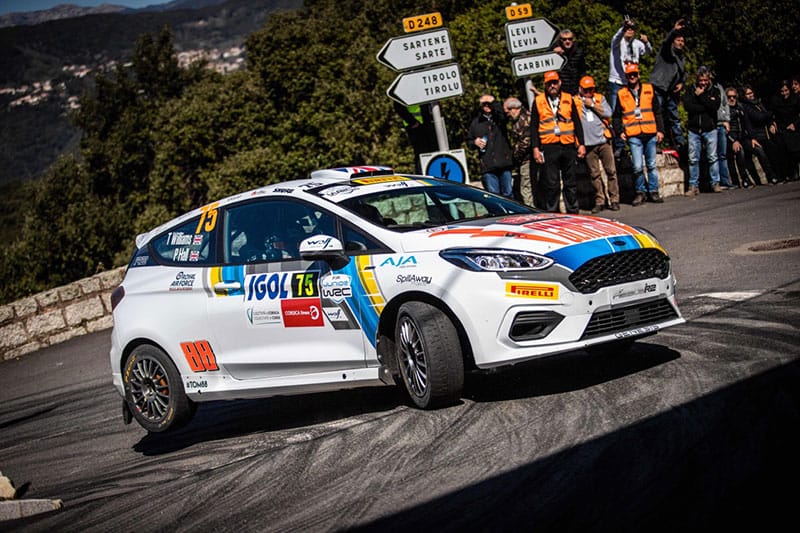 Upcoming British rally driver Tom Williams will be joining The Checkered Flag for the remainder of the 2019 season as he chases the Junior WRC title. He is currently sixth in the championship of thirteen drivers with two rounds down.

This weekend he heads in to Rally Italia Sardegna, driving the M-Sport Ford Fiesta R2, check out his first blog below as he talks about preparation for the weekend ahead.

Rally Italia Sardegna – now this is an event I’ve been looking forward to for some time!

After a strong start to this year’s FIA Junior World Rally Championship – finishing fourth on Rally Sweden and fifth (after a double puncture) on the Tour of Corsica – Sardinia is the first gravel rally of the season. And from now on, all the remaining rounds of the JWRC – Sardinia, Finland and the double points scoring Wales Rally GB – take place on a surface I have the most experience on. So the aim will be to build on that good start, push a bit harder, but remain focused and not make any mistakes.

Sardinia will be a completely new event for me and my co-driver Phil Hall. We’ve obviously been watching a lot of in-car footage from past rallies, and it looks like a cross between Rally Portugal and Turkey. The stages look quite tight, twisty and technical, so it should suit my driving style. So long as I can find a good set-up for the car, I feel that it’s an event that I will be able to push quite hard on. The rally can be quite rough, and it’s common for rocks to be pulled out onto the road by the cars running ahead, so you have to be careful to avoid hitting them and collecting punctures. We’ll have to be on the pace and careful at the same time, which is the hardest balance of them all.

We had a good pre-event test a few days ago at Walters Arena. We did eighty kilometres in an EDSL Sport Fiesta R2, which was fantastic to drive. Needless to say, when trying to prepare for the hottest JWRC event of the year it was cold and wet in south Wales – although it did dry out just enough in the afternoon to allow me to kick up a bit of dust!

You can’t beat seat time, and driving anything anywhere is always good for driver development. That’s why I went to Whilton Mill Kart Circuit recently for my first ever blast in a proper racing kart.

I never raced karts as a kid. I was a bit of a later starter to motorsport – a fact that was highlighted when I met a ten-year old kart racer called Leon Robinson when I paid a visit to my old Moulsford Prep School the other day, finding out that he’d been competing longer than I have! He’d been racing karts for six years, and I only started rallying five years ago – incredible!

Needless to say that when the opportunity arose, I jumped at the chance to spend a day testing a proper two-stroke water-cooled 125cc engined X30 racing kart from the Jack Dex Racing stables. It was a completely new experience and totally different to rallying of course, but I learnt a lot of different driving techniques that I can adapt and bring back to rallying. The aim of the test was all about intensity, fitness, consistency and focus, and there aren’t many other machines that can test your three hundred and sixty degree performance than driving an eighty-six mile per hour kart all day!

The test was also good for me to focus on my racing lines. Everything is so much more sensitive and reactive in a kart, so when I was going ‘round I could immediately see where I was going wrong and where I could do better. The kart was also very physical to drive. By the end of the day I could feel that my neck and rib muscles had had a very good workout! It was really great fun and I can see how kart racing can become quite addictive.

Now the focus is one hundred per cent on Sardinia, and attempting to continue our good start to the year. The JWRC is very strong this year, but I’m proud to be representing the UK as its only British driver and you can rest assured that I’ll be doing everything I possibly can to bring home a good result.

By Alice Holloway
4 Mins read
Part three of The Porsche Story looks in detail at the endurance and 24 Hours of Le Mans successes the brand has had with their GT and Prototype cars.
FeaturesFormula 1

By Fergus Mckie
3 Mins read
Despite not scoring points this season, there was a clear step-up in terms of the speed of the car for Williams, with George Russell regularly contesting for a spot in Qualifying 2.
FeaturesFIA WECFormula 1IndyCarRally