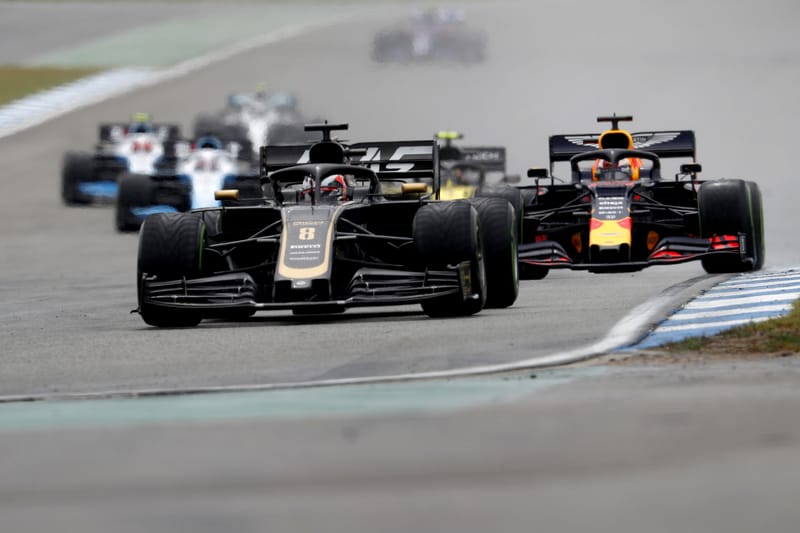 As rumours about his immediate future in Formula 1 intensify, Romain Grosjean claimed his best finish of the year in the tricky conditions of the 2019 German Grand Prix, despite once again making contact with his Haas F1 Team team-mate.

Grosjean headed to Hockenheim with just two championship points in his 2019 campaign, courtesy of a pair of tenth place finishes. A raft of struggles, including several high-profile incidents with his team-mate Kevin Magnussen have lead to suggestions that Grosjean is to be replaced at Haas as early as the summer break.

Amid the tricky conditions of Hockenheim however, Grosjean claimed ninth place at the finish, one place ahead of Magnussen, but was promoted to seventh following post-race penalties for both Alfa Romeo Racing cars.

Depsite his best finish of the year, Grosjean says that Haas are still off the pace compared to their mid-field rivals.

“I’m very happy with the double points finish,” said Grosjean after the race. “It was obviously a bit of a crazy race. I don’t think we’ve quite sorted our race pace. When you see the midfield being in front of us and only the Williams behind.

“Anyway, we survived when we had to survive, but it was very difficult. You saw all the top guys going out and off the track – conditions were very tricky.”

With rain coming and going in Hockenheim, the opportunity was afforded to the mid-field to spring a surprise with a podium position up for grabs. With the likes of Lewis Hamilton, Charles Leclerc and Valtteri Bottas struggling or crashing out, the final podium spot went to Scuderia Toro Rosso‘s Daniil Kvyat. Grosjean however, believed Haas should have been challenging for third.

“I’m happy to have a double points finish, but when you see a Toro Rosso on the podium, you wish you were there,” said the Frenchman. “With all the experience we have, we should be able. It’s just that the race pace on inters and slicks wasn’t good enough.”

Despite gaining six points in Germany, Grosjean remains seventeenth in the drivers’ standings with rumours he’s set to be replaced at Haas by Pascal Wehrlein as early as after the next race in Hungary.

By Jasmine Butler
2 Mins read
Toto Wolff congratulated the hard work of everyone in the Formula 1 community for a busy couple of months ahead of the Russian Grand Prix.
Formula 1

McLaren looking to 'maximise all opportunities' in Russia

By James Thomas
3 Mins read
At the first flyaway race of the season, McLaren are looking forward to the possibility of scoring decent points.
Formula 1