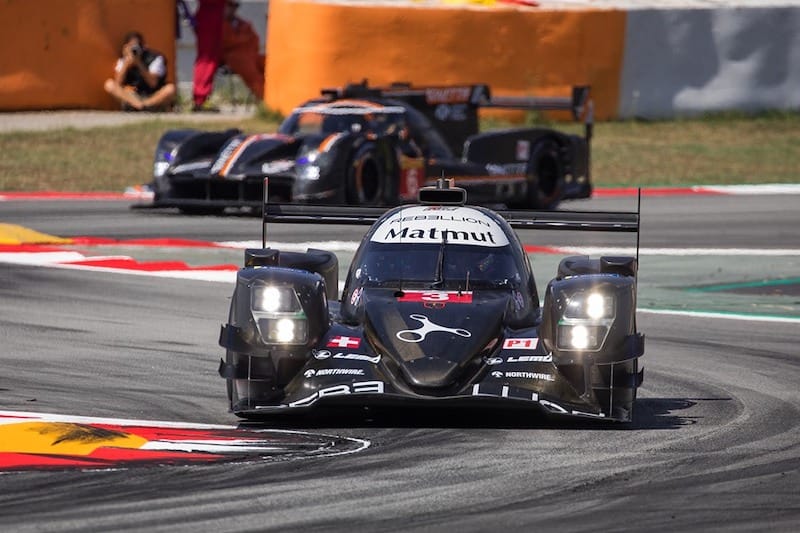 Toyota Gazoo Racing still remain on top of the field, but the challenging non-hybrid were closer than ever to the Japanese cars at the chequered flag.

Both Toyotas broke into the 1m29s lap times this session, going faster than the pace set yesterday morning. They may be the only cars to set sub-1m30s lap times, but this session they only held four-tenths of an advantage over the non-hybrids. Toyota did set the most laps of the class, surpassing 120 with both cars, but it cannot be denied that the pace of the challengers has been getting steadily closer.

Rebellion Racing once again has a quiet but productive four-hour session, with Bruno Senna putting in the lap time that was only four tenths off the Toyotas. His 1:30.110 was a similar pace to what the Japanese team were setting yesterday afternoon. The sister #1 car sat just two tenths off Senna’s time, with a 1:30.356.

Team LNT had a slow start to the day with the #5, failing to appear on track very much during the first few hours of the session. The team eventually made it out of track, setting 22 laps and a 1:31.006, going fifth in class and 0.2 seconds faster than the sister car. Reason for the delay is unknown at the time of publishing, but they set under half of the laps that the sister car did.

AF Corse were once again the ones to watch as they topped their third consecutive session. Miguel Molina and Davide Rigon took honours this session, leading the Ferrari-Porsche-Ferrari-Porsche top four. All four cars lapped within four tenths of each other, but Porsche GT Team spent more time on track, collectively putting 180 laps worth of mileage on the two cars.

With the 24 Hours of Spa-Francorchamps this weekend, a lot of the GTE drivers have had to split commitments between the WEC Prologue and the 24-hour race. Most of them opted to partake in yesterday’s test day and head out to Spa today, missing the second day.

Aston Martin Racing has been the GT team effected most by this, with Alex Lynn, Maxime Martin, Nicki Thiim, Ross Gunn and Jonny Adam all vacant from today’s Spanish track action, leaving just Marco Sorensen to test the #97 Pro car. Setting 39 laps, the Dane did a best time of 1:44.953, putting him 1.4s off the pace of the leading AF Corse.

This clash in commitments also means that, as Adam was the only driver testing the TF Sport, the #90 will not be see out on track today.

After having six drivers in the car yesterday, the Am Aston Martin drops to just two drivers, with Paul Dalla Lana and Darren Turner sharing duties in the #98. Their 61 laps, with a fastest of 1:45.618 put them seventh in class, 1.2s off the pace of class leaders Team Project 1.

The Team Project 1 Porsche duo were unstoppable again, taking their third consecutive one-two of the test sessions. The Gulf Racing #86 made it a trio of Porsches at the top again with 53 laps and a 1:44.998 keeping them adrift of the reigning Am champions by four tenths.

LMP2 took another twist in unpredictability as Team Racing Nederland claimed the fastest lap of the session. The 1:32.941 kept the Cool Racing trio of Nicolas Lapierre, Antonin Borga and Alexandre Coigny back by 0.040.

The Goodyear runners put in more mileage than the Michelin runners this session, with two of the top three running using Goodyears.

Cetilar Racing, as the only non-ORECA LMP2 team on the grid, found themselves at the back of the pack again, 4.9s off the fastest lap set by the #29 crew. It appears that the Dallara may be on the back foot in comparison to the ORECA chassis, with the #47 team unable to finish a test session – so far – higher than seventh in class.