Giovinazzi Heaps Praise on Team-mate Räikkönen: “He has a lot of experience, he knows what to do” 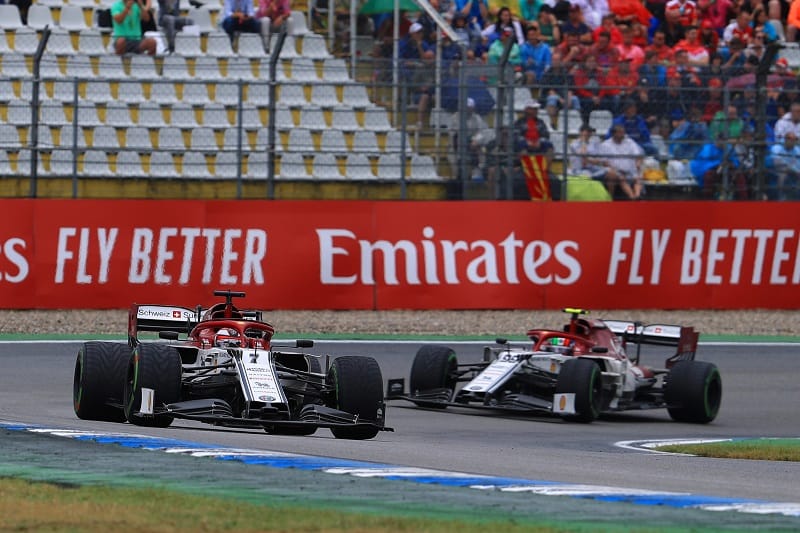 Antonio Giovinazzi has heaped praise on his Alfa Romeo Racing team-mate Kimi Räikkönen, with the Italian admitting he is learning a lot by being placed alongside the Finn in 2019.

Giovinazzi has only scored one point in the opening twelve races, courtesy of a tenth-place finish in the Austrian Grand Prix, although he did lose an impressive eighth place result in the German Grand Prix due to a time penalty imposed by the stewards’ post-race.  He has also impressed at times in Qualifying but fallen away when it mattered on race day.

Räikkönen on the other hand has finished inside the top ten on eight occasions and has thirty-one points to his name, but for Giovinazzi, he is finding it beneficial to have someone as experienced as the Finn as his team-mate.

“You have positive things and negative things,” Giovinazzi is quoted as saying by MotorsportWeek.com.  “The positive thing is you can learn from him, watch his data, watch what he’s doing in meetings or on the track or whatever.

“So sometimes my race pace can be less compared to Kimi, but just because he knows what he wants, knows what to do, he’s been there 20 years already.  From my side I’m really happy to have Kimi because he’s a really fast driver, still really fast, with a lot of experience, if you ask him something he will reply to me.

“From race one to now I grew up a lot and I think this is also because of Kimi, because I’m watching him and everything.”

Giovinazzi believes that what he has learned from Räikkönen will benefit him in the long haul, and in particularly, noticing differences between how he and his team-mate prepares for the weekend is already making him become a better driver.

“From my side I have no experience and I try to be focused but I miss that part that makes a lot of difference.  I was watching his onboard after a few races and I saw something I was not doing and now I am doing – so experience is the main thing but I think it will come with races.”

Alfa Romeo Team Principal, Frédéric Vasseur, is also full of praise for the veteran Finn, saying the relationship between the team and Räikkönen is ‘working perfectly’ and that he could not have asked for a better start to their partnership.

“The advantage with Kimi is before he signed last year we had hours of discussions, about the team, the positive and negative points, where we could improve, where we have to improve,” said Vasseur to Autosport.  “We were very open about what is the real situation of the company.

“And I think now he is not surprised when we have issues because we knew that before.  He’s fully committed on the project. I don’t know how he was last year with Ferrari, I was not there, but for us it is working perfectly.”

Vasseur admits he had concerns about Räikkönen’s commitment levels ahead of the move, but those have been allayed and he is delighted with the Finn’s attitude as well as his driving.

“The most important for me was to make sure he was committed,” said Vasseur.  “Committed means he will be present at the factory, he will push the guys, he will be demanding.

“He is demanding, and I don’t want him to relax, that’s absolutely not the case.  I want to have someone in the team pushing for results.  It’s a good situation for the engineers also and it’s important.

“But he already understands that he’s not at Ferrari or Mercedes and everything can’t be fixed in two weeks.”