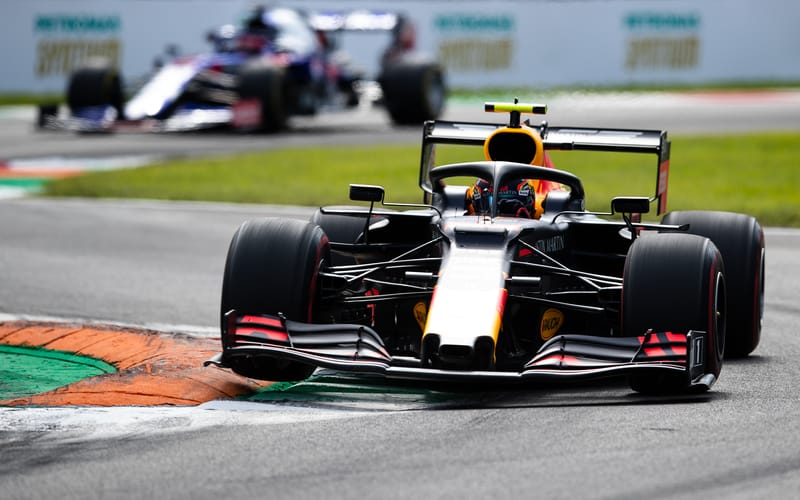 Alexander Albon believes his “race pace is getting better” as he continues to acclimatise to the Red Bull Racing RB15, as his sixth place in the 2019 Italian Grand Prix shows.

After the farcical Monza qualifying in which Albon failed to set a time in Q3, the rookie started the race eighth as Red Bull’s lead driver; his team-mate Max Verstappen having taken a grid penalty.

Albon started poorly, dropping to eleventh after a bad start and a trip through the turn five gravel trap after a failed attempt to pass Carlos Sainz Jr. As in Spa the weekend previous however, Albon came back stronger in the second half of the race, recovering to finish sixth, just 1.2-seconds behind fifth place Nico Hülkenberg despite serving a five-second penalty for gaining a lasting advantage following an off-track excursion.

Though the race “didn’t go as planned” Albon sees positives in his Monza race performance as he stakes a claim for a seat with Red Bull in 2020.

“There were positives for me even though the race didn’t go as planned,” said Albon. “It isn’t the easiest track for us and we had quite an unlucky weekend in the qualifying.

“I didn’t have a great start and had to fight my way back though the field.

“Unfortunately, we didn’t have the pace on the straights to overtake so I had to do my manoeuvres on the corners. That resulted in a lot of side by side action and at one point I just lost a bit too much grip going that wide so it started to get messy.

“I had a few offs and took a five second penalty. However, my race pace is getting better with the car and I feel I have made a good step up from Spa so personally speaking I am happy.

“Hopefully Singapore will be better for me as there will be more downforce and more corners. I think there is a lot more to come and I’m feeling more competitive.”

Albon now sits ninth in the title race on thirty-four points as Red Bull lose touch with Scuderia Ferrari in the constructors’ standings; the gap is up to 85-points.