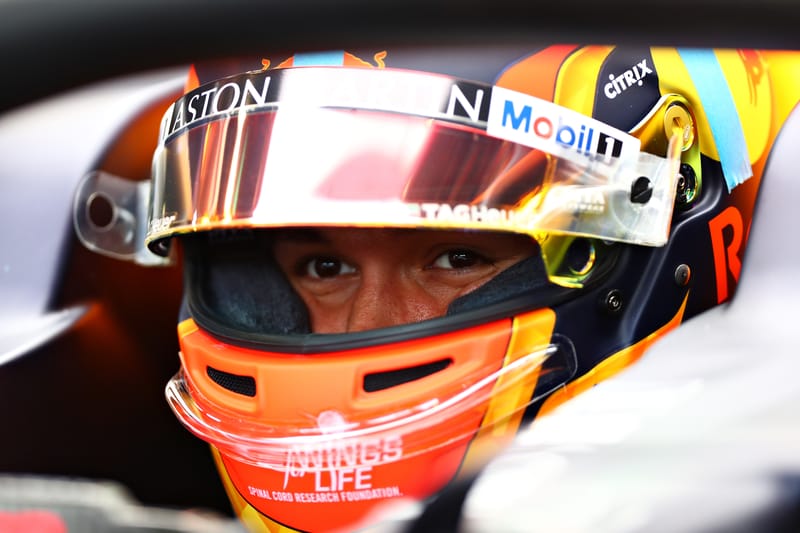 Alex Albon says he realised by turn four at Monza that he was likely to miss out on setting a lap-time in Q3 as he describes the 2019 Italian Grand Prix qualifying controversy.

Albon had missed out on setting a lap-time during the first set of runs in Q3 owing to the session being stopped for an incident involving Kimi Räikkönen. The pressure was on therefore, for Red Bull Racing‘s newest recruit to set a competitive lap-time in the final minutes of the session.

Such is the benefit of slip-streaming at Monza however, none of the nine remaining drivers in Q3 were prepared to lead the pack as the clocked ticked down to end the session.

It resulted in the pack driving unduly slowly and seven of the nine drivers, including Albon, failed to start their timed laps before the checkered flag fell.

“Although I’m still learning what the car needs to be really quick, it felt good before the final run in Q3,” said Albon. “I was fighting for P4 or P5 on the grid but then we got the red flag and the lap was compromised.

“On the second lap it was more of a priority for us to put in a good time but the guys who had already done a lap could afford to be a bit slower. Everyone came out too late because no one wanted to be in front as we all wanted the slip steam and that created a delay.

“These cars have quite a lot of drag so getting a tow can gain you an extra two or three tenths which you need to get up the field. I was trying to pass the other cars but because everyone was weaving down the straights to keep the tyre temperature up as we were going so slow, it got backed up and it became impossible to overtake.

“I realised by Turn 4 that it was going to be difficult to make it. When we all knew time was running out everyone suddenly picked up their pace, so we were almost flat out by the end of the lap.

“We should have taken less risk on the second run, but we were fighting for a top five position. It’s frustrating as getting a good position in qualifying would have made tomorrow’s race a lot easier but I had good pace yesterday so there is everything to fight for.”

Pending possible penalties, Albon is set to start Sunday’s race from eighth on the grid as the top Red Bull driver as team-mate Max Verstappen starts at the rear of the grid owing to an engine change grid penalty.