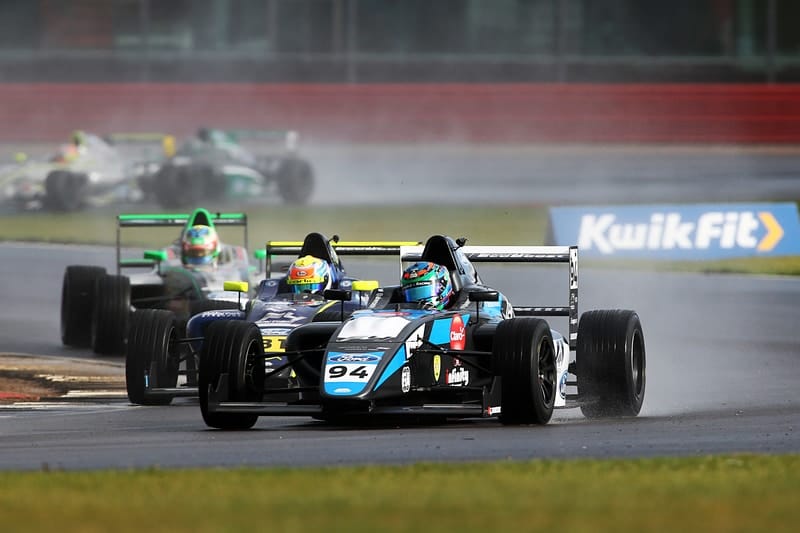 Sebastian Alvarez has drawn level on points with F4 British Championship certified by FIA – powered by Ford EcoBoost rival Zane Maloney after sealing victory in the second race of the Silverstone event but the net result is only provisional courtesy of a plethora of stewards investigations.

The Mexican lined up fifth on the grid but kept himself out of the carnage ahead of him to rise to third by the end of the first lap. He then picked off Maloney and the race leader, Arden‘s Alex Connor, to ascend to the top step of the podium.

Maloney took the checkered flag in second, the pair at one point separated by just half a second round as they toured the Northamptonshire circuit.

Alvarez’s win means the pair are equal at the top of the championship standings with Maloney keeping first place courtesy of his season’s tally of victories.

Louis Foster showed supreme pace in the wet conditions and was unfortunate to be caught up in an opening lap tangle with Maloney and Carter Williams at Brooklands. Undeterred, the 16-year-old diced his way back through the pack to claim the final podium spot but was lucky to escape unscathed from a collision with Connor at Becketts.

Fortec had supreme pace in the wet weather and were rewarded handsomely with fourth place for Roberto Faria, his best finish of the year so far.

Bart Horsten felt more than comfortable in his Arden, the Australian vaulting a mammoth ten places from the very back of the grid to fifth place at race end after some decisive race craft.

A poor start for Luke Browning from eighth on the grid meant he lost position at the start of the race but the Cestrian driver quickly made up ground to recover and claim sixth on the road for Richardson Racing, two positions better than his result in race one.

Rookie Chris Lulham showed great improvement from yesterday’s race to today’s; the 16-year-old scoring his first points in the championship with seventh as well as his maiden Rookie Cup podium to boot.

Tommy Foster kept his nose clean and capitalised on the misfortune of others to climb six places from 14th on the grid to eighth, getting his first points of the weekend after his retirement from race one.

It wasn’t such a good race for JHR Developments‘ Josh Skelton. The 18-year-old lined up fourth on the grid but struggled for pace in the weather and was soon at the mercy of his rivals as he was embroiled in several battles for position and ultimately took the flag in ninth, ending his spell of nine successive podium finishes.

Williams salvaged what he could from the race after his opening lap drama to take the final point on offer but will no doubt rue the lost opportunity to challenge for a potential podium.

Alex Walker prevailed from a late-race tussle with Reema Juffali to take 11th but not without incident. Attempting to repass Juffali, the 15-year-old ducked down the inside through Becketts but tagged Juffali on the way through, pitching her into a spin.

Mariano Martinez was looking dead-set for his first ever podium finish as he excelled in the wet but the Mexican got it all wrong battling with Connor through Copse and Becketts. He found himself running wide and spinning off onto the grass, resigning the 15-year-old to 12th.

Abbie Munro had a tough race starting from 10th on the grid, a spin halfway through nullified any of her progress so she crossed the line 13th.

Juffali’s contact with Walker dropped her to last on the road and capped off a disappointing morning for the Saudi driver.

The only retirement came from Connor, who found his Arden beached in the gravel at Becketts following his collision with Foster.

Tom is a freelance motorsport journalist. As well as being The Checkered Flag's lead British F4 reporter, Tom is also studying for a Sports Journalism degree at Solent University and joined the Autosport Academy at the start of 2019.
Articles