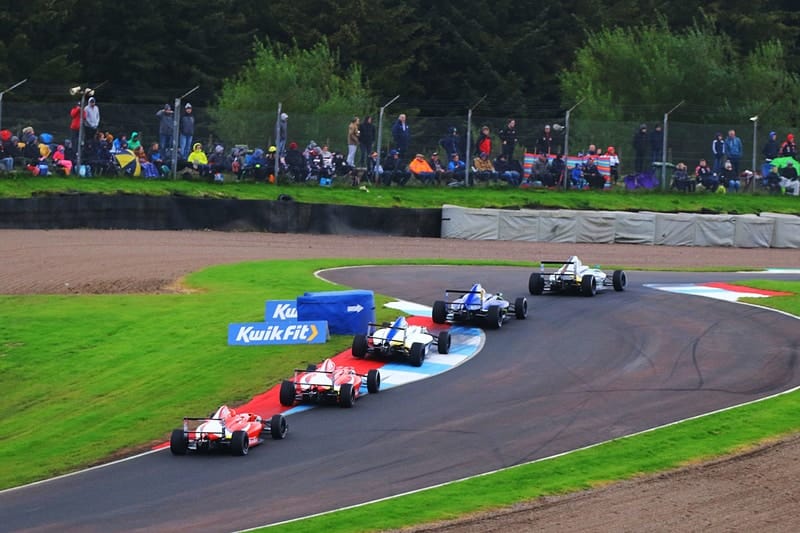 The Knockhill meeting of the 2019 F4 British Championship certified by FIA – powered by Ford EcoBoost treated us to a weekend filled with drama and action and the net result of that is the drivers’ championship is anyone’s guess.

Zane Maloney entered the weekend with a 37-point cushion to Sebastian Alvarez and all seemed well in the early stages with the sole Carlin racer snatching pole position and winning the opening race, allowing him to extend that gap to 47 points.

But that was the Barbadian’s luck for the weekend. Races two and three were nothing short of a disaster; damage in that second race relegated him to eighth whilst all five of his rivals finished ahead of him.

Due to line-up on pole position once more in race three, Maloney never took to the grid owing to a driveshaft failure. Quick work from his Carlin team soon got him back out on track but all efforts were futile as he wasn’t classified come the checkered flag.

Meanwhile, victories for Carter Williams and Louis Foster, coupled with a hat-trick of podium finishes for both Alvarez and Josh Skelton meant that 47-point advantage Maloney held over Alvarez had been ruthlessly slashed to just 15. Williams sits the furthest adrift, 135 points behind but there’s still 150 up for grabs in the final six races and the American has been in form of late.

However, he’s not the only JHR Developments driver to be enjoying a successful time of things at the moment; Skelton’s weekend of rostrums extends his run of podium visits to eight in a row.

Foster’s win was his first since April and a more than welcome return to the top step of the podium as well as leading a Double R Racing one-two alongside Alvarez in the third race.

Elsewhere, it was damage limitation for Arden’s Bart Horsten as a grid penalty in qualifying dropped the Australian from what would’ve been pole position to sixth. A valiant effort across all three races meant he retained fifth in the championship and is still in with a shout of lifting the trophy.

Richardson Racing’s Luke Browning once again scored consistently well across the weekend with a seventh place in the opening race and two further fourth place finishes later in the weekend.

Moving way from the title battle, Horsten’s Arden team-mates Tommy Foster and Alex Connor had good pace as well; Foster claiming top eight finishes across the board whilst Connor triumphed twice in the Rookie Cup.

The team’s new addition, Abbie Munro, made her series debut as well and was immediately on the pace. The 17-year-old impressed at her home circuit with three consecutive points finishes, displaying remarkable consistency.

It was a weekend of mixed fortunes for Fortec. Roberto Faria claimed his best result of the season in fifth during race one but team-mate Mariano Martinez was forced into early retirement in all three races.

Tom is a freelance motorsport journalist. As well as being The Checkered Flag's lead British F4 reporter, Tom is also studying for a Sports Journalism degree at Solent University and joined the Autosport Academy at the start of 2019.
Articles

By Michael Callander
2 Mins read
Roman Bilinski has impressed in his short time in GB3 so far, and will step into the series full-time for the rest of the season.
F4 British Championship