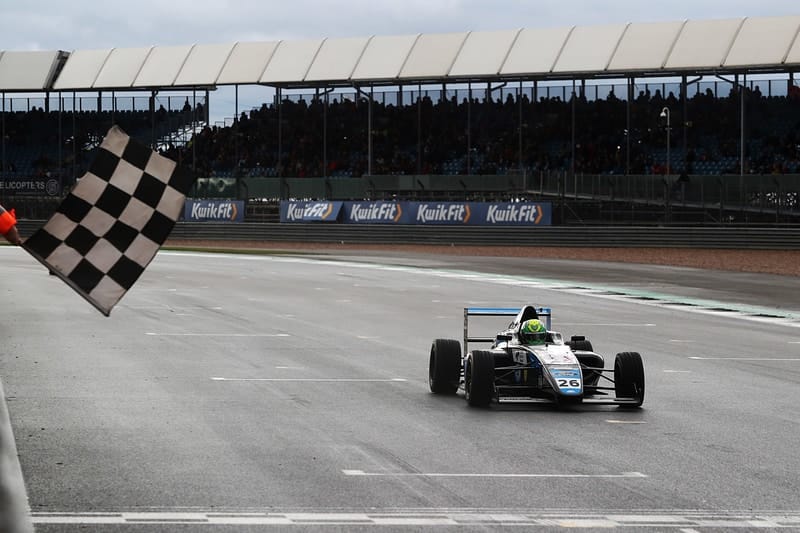 Louis Foster ended the Silverstone leg of the F4 British Championship certified by FIA – powered by Ford EcoBoost with his second win of the weekend, whilst title rivals Sebastian Alvarez and Zane Maloney crashed out in spectacular fashion.

The 16-year-old started from pole position and was unchallenged off the line, whilst a poor start for Josh Skelton from second on the grid allowed Double R Racing‘s Alvarez and Carlin‘s Maloney through. Before long, the pair began duelling for second place, where they ran side-by-side through Brooklands; Maloney squeezed Alvarez just over the edge of the track where the Mexican then lost control of his car on the grass and found himself ploughing into the side of Maloney’s #31 machine as the pair entered Luffield, wiping them both out on the spot.

Up ahead, Foster had the measure of the field once again and held his own – even when the weather conditions took a turn for the worst.

“We knew we were gonna be able to pull away like that,” Foster explained. “Obviously there was a chance we wouldn’t, but we were pretty confident that we wouldn’t have a fight, which we didn’t.

“After the safety car came out, I was a little worried because it started raining loads and I wasn’t sure how my tyres were or where the grip would be.”

“I was having to be conservative because I couldn’t afford a DNF in that race when my rivals had just crashed out, so we needed to score highly. If Bart [Horsten] had started attacking properly then I would probably have let him through because we just needed to get the points.“

For Bart Horsten, second place was his best result since Snetterton. The Australian was aided by the squabbling ahead of him but still showed strong pace in the changeable conditions to finish only 1.3s behind Foster.

Luke Browning once again put on a wet weather masterclass for Richardson Racing as the Cestrian driver blitzed the field from 15th, and last, on the grid to take the final podium spot.

Despite his shaky start, Skelton claimed fourth place to keep his title aspirations alive heading to Brands Hatch, just ahead of Chris Lulham, who took an outstanding fifth place, and a maiden Rookie Cup win to go with it, to close his first weekend in the series.

Sixth place belonged to Tommy Foster, claiming another strong points haul after starting from ninth on the grid. He spent the latter stages of the race defending fifth from Lulham but was powerless to stop the rookie from passing.

Roberto Faria was the second Fortec to make it home, rising from 12th on the grid to seventh only half a second behind Foster in front. Alex Connor followed just three tenths behind in eighth for Arden Motorsport.

Carter Williams, who suffered another spin on the opening lap of the race, severely damaged his chances of a strong result and came home for a solitary point in 10th.

Non-finishers include Alvarez and Maloney after their race-ending contact and Alex Walker after an off-track excursion brought him to the pits and into an early retirement.

With just three races to go, the championship couldn’t possibly be any closer. Maloney and Alvarez are separated only by their respective number of race wins with Foster lurking 30 points behind and Skelton 59.5 with only 75 still to contend for.

The season will come to its dramatic conclusion at Brands Hatch on 12-13 October, where any one of those four drivers will be crowned the 2019 champion.