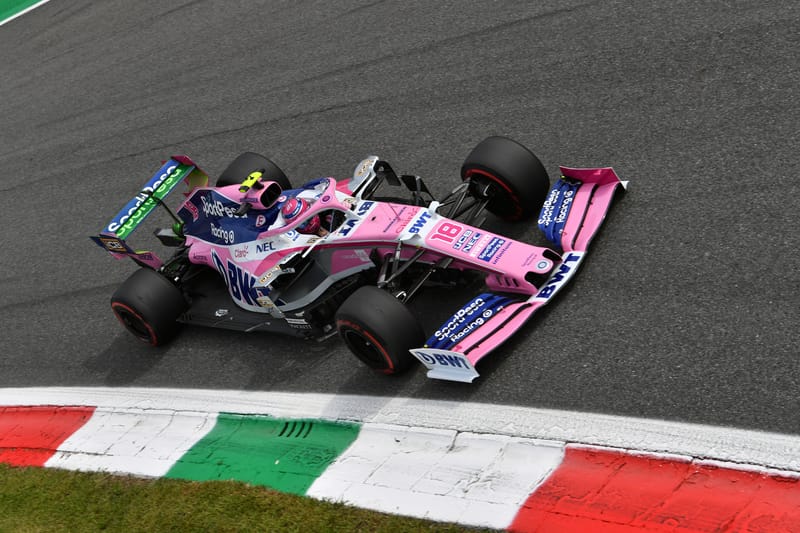 Lance Stroll has made a long-awaited return to a Q3 session during a controversial qualifying for the 2019 Italian Grand Prix at Monza, ending the session in ninth having failed to set a lap-time.

Along with all the drivers who featured in the final qualifying session, Stroll has been summoned to the race stewards who are investigating the farcical final minutes of qualifying.

While the Canadian was initially at the front of the pack that slowed seemingly unnecessarily, Stroll admits that it was “a shame” he was unable to set a lap-time.

“I’m happy to be back in Q3 because it’s been a little while,” said Stroll. “However, it’s a shame we couldn’t set a time at the end there.

“I think everyone underestimated the time to get to the line, everyone got greedy looking for the tow and in the end nobody got it! Hats off to Sainz: he judged it just right.

Stroll has previous good form at Monza, the scene of his only front row start in 2017. For the race tomorrow, the Canadian is looking to the skies and hoping for rain to “spice things up.”

“I have some good memories of coming here [to Monza] over the years. It’s awesome to be behind the wheel of an F1 car on a high-speed track like this because you really get to feel the car working at its best. I’m hoping for some mixed conditions to spice things up tomorrow and to score some good points for the team.”

While Stroll was embroiled in the final Q3 controversy, his team-mate Pérez failed to progress passed Q1, his Racing Point RP19 breaking down during the opening minutes.

“It’s a big shame,” saidPérez. “We lost an opportunity today and we were not able to go through. I think it was something with the engine but I don’t know yet – I haven’t spoken with my engineers. I just lost power and had to stop the car. We’ll see what we’re able to do tomorrow. Hopefully we can minimise the damage and have a strong race to try and score points.”

With one car set to start Sunday’s race inside the top ten and one toward the rear of the field, Racing Point team principal Otmar Szafnauer has mixed feelings.

“Lance did a great job to get into Q3,” said Szafnauer. “He wasn’t especially happy with the car in final practice, but we made some important changes ahead of qualifying and Lance drove some clean and tidy laps when it mattered.

“It’s a shame Sergio couldn’t join him in Q3 and the power unit issues need to be investigated and fully understood. It means Sergio will start at the back of the grid tomorrow, which is a bit frustrating. We are working with Mercedes to decide which power unit will be best to fit for the race.”