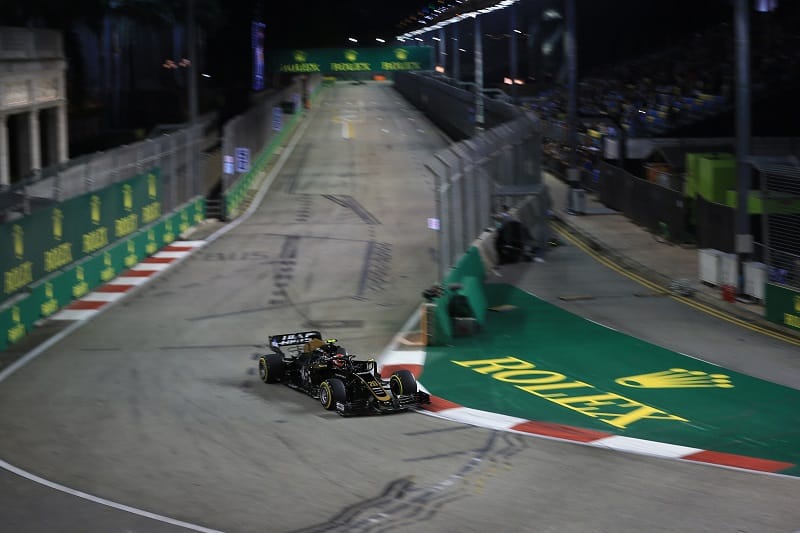 Kevin Magnussen expected Saturday’s Qualifying session at the Marina Bay Street Circuit to be tough for his Haas F1 Team, and so it was proved to be as the Dane could only manage the fifteenth fastest time.

Magnussen at least was able to make it into Q2, something that was looking unlikely based on the positions of both cars in all three free practice sessions, but the Dane is expecting the Singapore Grand Prix on Sunday to be equally challenging.

“We didn’t have the pace today,” said Magnussen.  “I kind of expected it to be a tough day. Now we’ll see if we can make the tyres hang on in the race and hopefully hold our starting position.

“I’m not expecting to make much ground, but you can always hope that people make some mistakes. If we can hang onto our position then maybe with safety car and a lucky pitstop or something, we could make some progress even without having the pace.

“That’s what we cross our fingers for tomorrow.”

Team-mate Romain Grosjean was eliminated in Q1, but the Frenchman felt there was more to the package than he was ultimately able to extract.  He had reverted back once more to Melbourne-specification parts, as he did during the British, German and Hungarian Grand Prix, but was unable to find the balance with his car due to final practice being held in much different conditions.

“I think there was more in the package than what we got,” said Grosjean.  “We changed the car after yesterday, reverted to a lot of parts from the Melbourne-spec – on my side of the garage.

“We didn’t have a chance to try it in cool conditions because FP3 was still warm. I think the balance got away from us in qualifying, so we couldn’t quite extract the maximum. It’s unfortunate but I think we just didn’t get the time to set it up right for the cooler temperatures.

Team Principal Guenther Steiner admitted the result of Qualifying was not unexpected following their lack of pace throughout practice, but it is important to keep working on the car across the remainder of the season.

“Unfortunately, this was not unexpected today – this result,” admitted Steiner.  “I actually think Kevin (Magnussen) did a good job to get into Q2.

“We know where we are at the moment, we just need to keep on working.”

Grosjean on Haas’ Austrian GP – “It was a very tricky car...

Haas Could Include Pay Drivers in 2021 line up

Magnussen not ‘nervous’ about return to racing

Magnussen Insists he is not the Only Driver to have ‘Overstepped the...