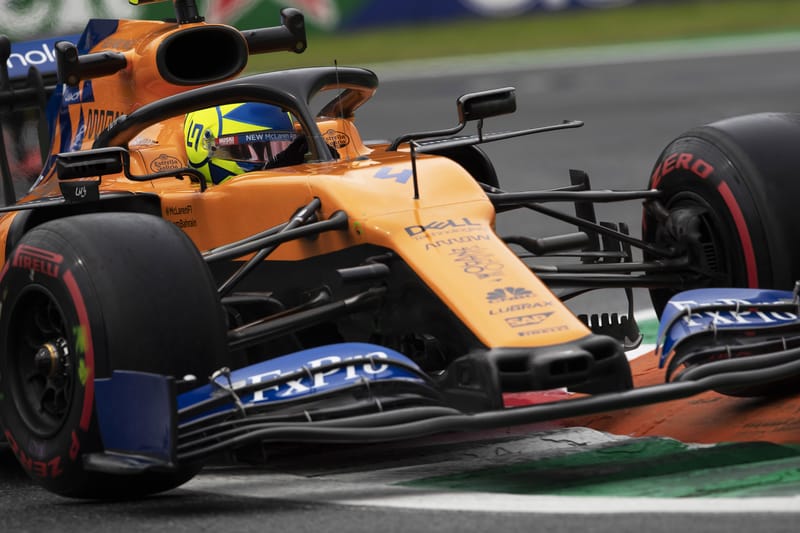 A week on from his heartbreaking final lap failure in Belgium Lando Norris charged from the back of the field in the 2019 Italian Grand Prix to finish in the top ten for the sixth time in his rookie season.

Norris was set to score his best result in Belgium, running fifth as he started the final lap but a power unit failure saw him as a painful late retirement. His task to make amends in Monza was made all the more difficult with an engine change grid penalty seeing him start the race from sixteenth.

Although he lucked out with the timing of a mid-race virtual safety car, Norris finished the race tenth, taking one world championship point on a day when team-mate Carlos Sainz Jr. retired from the race.

“A decent race and a point is alright considering where I started, but you always want a little bit more,” said Norris. “We got a bit unlucky: we boxed, we had the undercut on Perez, but then the Virtual Safety Car came out and he got a bit lucky to stay ahead and went on to finish in P7.

“I’m not suggesting we definitely would’ve finished there, because I think they still had better pace than us, but we could’ve finished better without the VSC. In the end, I didn’t think we had all the pace but we hung on, managed to finish the race and got a point – which was a good thing after last weekend in Belgium.”

In failing to get the better of Sergio Pérez in Monza, Norris drops to fourteenth in the drivers’ standings, two points behind the Mexican. The McLaren F1 Team remain fifth in the constructors’ championship but see the Renault F1 Team close to within just eighteen points with seven races remaining.