Red Bull’s Christian Horner: “It was a very interesting and strategic race” 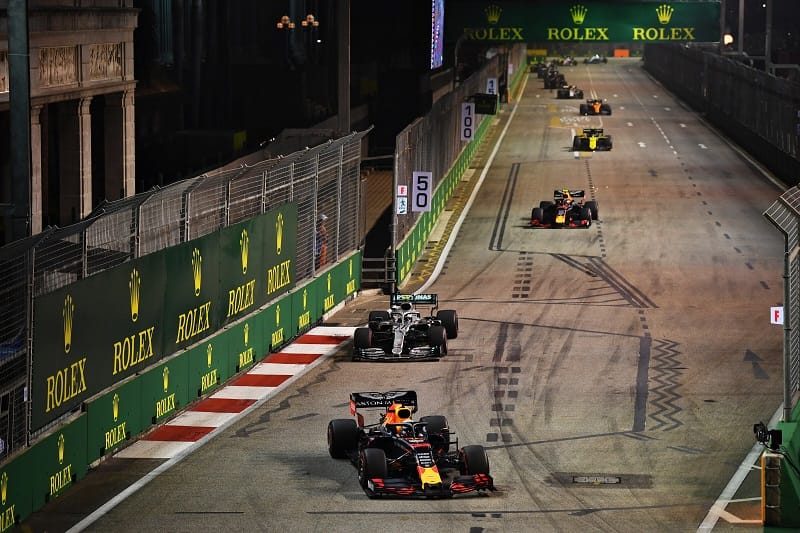 Christian Horner admitted the Singapore Grand Prix was a race full of strategy, with Max Verstappen making up one place from his grid slot to finish on the podium in third.

Verstappen attempted an early pit stop and could have found himself ahead of Charles Leclerc had he not found Nico Hülkenberg in his way on his out lap, with the time lost behind the Renault F1 Team driver ensuring that Scuderia Ferrari maintained their position ahead of him.

Horner, the Team Principal at Aston Martin Red Bull Racing, said it was always going to be a race decided by strategy as soon as Leclerc drove as slowly as he did in the opening stint, but Lewis Hamilton’s decision to run long gave Verstappen the chance of a podium finish.

“It was a very interesting and strategic race,” said Horner.  “You could see early on that Leclerc in the Ferrari was managing the pace and eventually when everyone started racing from about Lap 15, the tyres quickly got out of shape for some of the front runners.

“So we decided to pit as early as we could with Max and we found him a gap on the same lap as Vettel which brought him out just behind Hülkenberg. That cost him a little bit of time and without that, maybe he would also have been able to get ahead of Leclerc after his pit stop, but with Mercedes opting to go longer, that gave him track position with P3.

“From there Max was able to manage the race extremely well despite the pressure from Lewis who was on a fresher set of tyres. He made no mistakes and did well to bring the car home for a podium.”

Horner was also pleased with the solid work done by Alexander Albon, who started and finished sixth on his first visit to Singapore.  The Team Principal felt the Thai driver drove with maturity despite being stuck behind Mercedes AMG Motorsport’s Valtteri Bottas for much of the evening.

“For Alex, it was again a very mature race from him,” insisted Horner.  “He was at the back of the front queue of cars and he just had to be patient.

“He probably didn’t have a clear lap all afternoon, but he managed the race and his tyres very well. P6 in your first Singapore Grand Prix with the big five finishing ahead is a very solid result.”