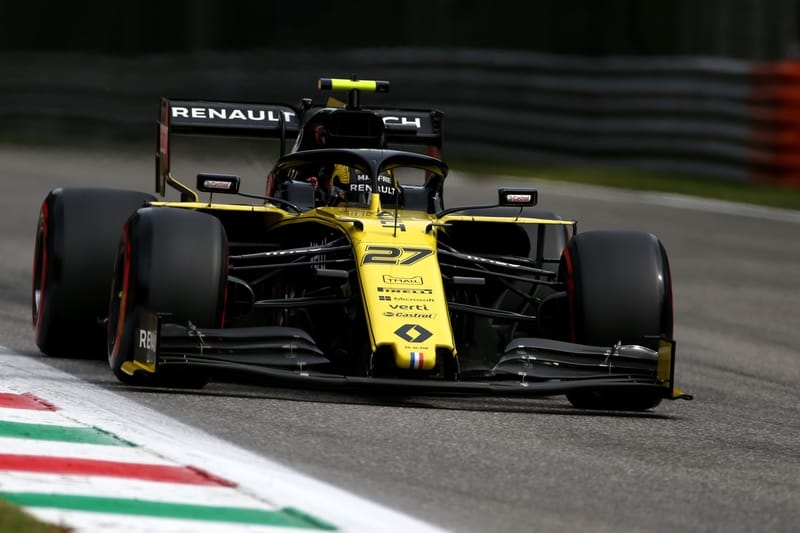 Daniel Ricciardo says the Renault F1 Team‘s lock-out of the third row for the 2019 Italian Grand Prix grid is a “good reward”, while team-mate Nico Hülkenberg courted controversy in the closing stages of qualifying.

Ricciardo had shown vastly improved pace for Renault during practice in Monza and continued that form into qualifying, progressing with ease into Q3 where his first run produced a lap-time of 1:19.839.

His time was good enough for fifth, one place ahead of team-mate Hülkenberg. But with the German one of several drivers causing chaos in the final minutes of qualifying, both Renault drivers were among seven who failed to complete a final run in Q3, cementing their third row lock-out.

“It was a great qualifying for the team, locking out the third row,” said Ricciardo. “We executed everything well today, and the result is a good reward for that.

“I had a good Q3 lap, and we’ve been a solid top six all weekend. Just like in Spa, we’ve been strong since the summer break and that’s pleasing.

“No one wanted to be first on the road at the end, everyone was side by side. It was a consequence of no one wanting to give their tow to everyone else. Still, fifth on the grid is really solid.”

Hülkenberg has been widely blamed for the controversy in the closing minutes of qualifying. The German was first to leave the pit-lane but appeared to leave the track at turn one on purpose before driving unnecessarily slowly, baulking other drivers.

He describes the incident as “a bit extreme” but explains the disadvantage of providing a slipstream to his competitors.

“I’m happy with the result, but it could have been a little better,” said Hülkenberg. “It was okay, I lost some rhythm in Q2 with a lock-up at Turn 1, so I had to reset myself.

“The ending was clearly a bit extreme but the tow has a big impact here and it’s worth a couple of tenths, which you can’t make up in the corners. That’s why we had some games at the end. It was peculiar with all the cars bunched up.

“Our pace was clearly very strong today and we have to back it up with points on Sunday.”

Hülkenberg, along with a handful of other drivers involved in Q3, has been summoned to the stewards and faces a potential grid penalty. But Renault’s Sporting Director Alan Permane is focusing on the opportunity to score valuable points in Sunday’s race.

“We are very pleased with the result of our qualifying session,” said Permane. “As in Spa, our car is working well here with fifth and sixth position a decent reward for our pace.

“Tomorrow is forecast to be a bit cooler and unsettled but we still expect a dry race; we’ll be ready for every condition. Our race pace from Friday’s practice session was good so we are looking forward to a strong race tomorrow and a decent points haul for both cars.”