“It was great to fight the Mercedes” – Carlos Sainz Jr. 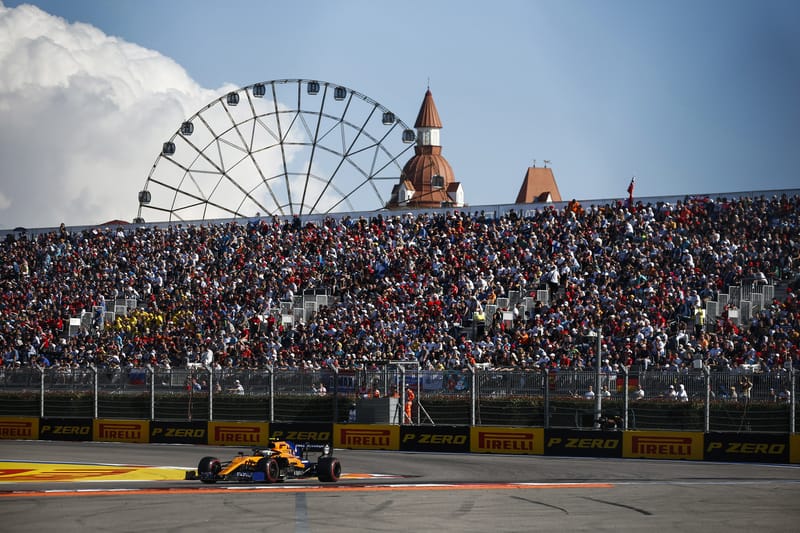 McLaren F1 Team were thrilled to come away with both Carlos Sainz Jr. and Lando Norris in the points in the Russian Grand Prix at the Sochi Autodrom on Sunday.

Sainz in particular was glad to finish in the top ten, a feat he had not done so in the last three races prior to Russia. Sixth position was the reward for his efforts, as his highlight was battling with the Mercedes-AMG Motorsport cars at the beginning of the fifty-three laps.

The Spaniard could not have wished for a better result, now that he is within three points of sixth place Pierre Gasly in the Drivers’ Championship.

“Very good race. A great start and a very solid execution from everyone today,” Sainz added.

“It was great to fight the Mercedes into Turn Two, which was one of my targets today. From then on I could control the race and I had good pace all the way through, even though it was impossible to hold both Red Bulls.

“This was not an easy weekend for us, but we managed to put it together and take another best of the rest finish. Great performance from the whole team and double points again. Congratulations.”

Lando Norris was equally happy with his performance, even though the Virtual Safety Car had put him at a disadvantage to others in the second half of the race but did well to finish ninth on the road before elevated up a position due to Kevin Magnussen‘s time penalty.

“Today has been a positive day for the team with good points,” Norris said. “Carlos and I both made good starts and gained positions. My first stint was reasonably good with decent pace, but then the VSC after my pit-stop shook things up.

“Cars came out of the pits from the VSC who were slower, preventing me from pushing as much as I wanted to, and then I was vulnerable to cars behind on fresher tyres. It was tough to keep the Renault and Racing Point behind. But overall a good weekend with more points for the team, a good reward for their hard work.”

McLaren’s Russian result has put them past the one-hundred point barrier, along with Mercedes, Scuderia Ferrari and Red Bull Racing. The double-points finish has extended their gap to fifth place Renault F1 Team to thirty-three points with only five races remaining.

Team Principal Andreas Seidl was pleased to see both Sainz and Norris “put up a great fight” in the knowledge that they had to work for the result they got.

“Today we got back to having two cars finishing in the points,” Seidl happily said.

“It’s a great team achievement particularly because everyone around us benefitted from the Virtual Safety Car and Safety Car at our expense. These 12 points are crucial in our ongoing battle to secure fourth position in the Constructors’ Championship.

“Both Carlos and Lando did a great job today. They made excellent starts and put up a great fight throughout the race. It was also important that we had two solid pit-stops helping to contribute to today’s results. We had a difficult Friday, but with support from home, the team managed to turn it around. We now look forward to Japan having scored over 100 points in the Constructors’ Championship for the first time since 2014.”