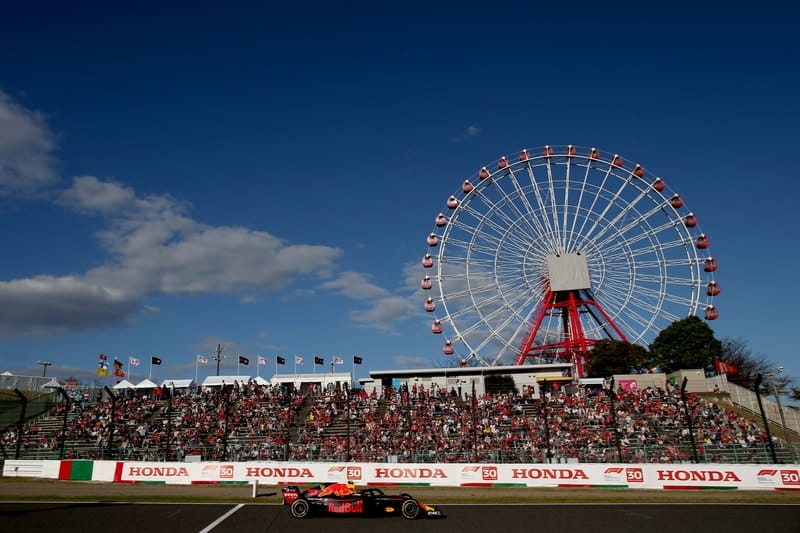 The seventeenth race of the 2019 FIA Formula 1 World Championship will take place at the historic Suzuka race track in Japan this weekend. The Japanese Grand Prix (‘Nihon-guranpuri’) is one of the most anticipated races on the Formula 1 calendar.

The original Suzuka track built in the 1960s was a 5.8 kilometer long circuit owned by the Japanese automaker Honda. The first official Japanese Grand Prix was however held at the Toyota-owned Fuji track in 1976.

This was the first race held at an Asian venue, before China and the East Asian Tigers joined the Formula 1 calendar. The first Japanese Grand Prix marked the rise of Japan as a top economic power after World War II. Iconic Japanese automakers like Honda, Toyota and Nissan had become world leaders in the automotive industry.

The inaugural race in 1976 was won by American Mario Andretti for Lotus. The Grand Prix distinguishes itself with a classic track described by most drivers as the ‘most challenging track’ in Formula 1.

The passion, knowledge and unparalleled support of the Japanese fans creates the atmosphere that makes this a truly unique race. After 1977, the Japanese Grand Prix was not held again until 1987, when it returned as the penultimate race of the season.

That first race in 1987 at Suzuka was won by Gerhard Berger for Ferrari. In 1988, Ayrton Senna driving for the McLaren-Honda team won the Japanese Grand Prix at Suzuka. This led to his first drivers’ championship and the start of his dramatic rivalry with teammate Alain Prost.

The next two seasons saw tough battles for the title between the two teammates culminate at the Suzuka track with race-ending collisions and disqualification.

The World Championship was won by Prost in 1989 and by Senna in 1990. The intense and bitter rivalry between the two drivers with the controversial races in Suzuka will forever be etched in the memories of Formula 1 fans.

An unfortunate accident in the rain in 2014 led to the death of the very popular Manor F1 driver Jules Bianchi. That is still a painful memory for all Formula 1 fans.

What happened at the 2019 Russian Grand Prix?

Lewis Hamilton scored his ninth victory of the 2019 season with an opportunistic win at the 2019 Russian Grand Prix. Hamilton’s win and the Mercedes 1-2 was aided by the misfortunes of the Ferrari team.

Charles Leclerc was on pole position for the fourth straight race in a row. Hamilton joined him on the front row. Sebastian Vettel and Valtteri Bottas were on the second row. Carlos Sainz and Nico Hulkenberg were on the third row.

Lando Norris, Romain Grosjean, Max Verstappen and Daniel Ricciardo started at the front of the grid. Alexander Albon crashed in the first qualification session and started in the pit lane after an unscheduled gearbox change, floor change and penalties for additional new power unit elements.

Vettel made a good start and used the slipstream of Leclerc to leapfrog his team-mate Leclerc and Hamilton to take the race lead. Vettel established a comfortable lead from Leclerc with a string of fastest laps and was outside DRS-range. The Ferrari pit wall instructed Vettel to let Leclerc pass him as it appeared to be a part of a pre-arranged strategy to let Vettel take the lead and push Hamilton to third position.

But Vettel insisted that Leclerc had to get closer so they could swap places. Ferrari decided that Hamilton was in close proximity and it was too risky to swap their drivers. The swap came during the series of first pit stops in which Leclerc pitted first and using the undercut was in front of Vettel. Mercedes gambled on a Virtual Safety Car or Safety Car period that came due to Vettel’s engine issues after the pit stop.

Hamilton pitted and used the opportunity to rejoin as the race leader. Leclerc later pitted again during the safety car period and rejoined in third position behind Hamilton and Bottas. That is the way it stayed till the end of the race with Ferrari having to be content with third position for Leclerc behind the two Mercedes drivers.

Verstappen and Albon recovered to fourth and fifth positions after taking penalties of varying degrees at the start. Sainz finished “best of the rest” in sixth position again. Sergio Pérez, Norris, Kevin Magnussen and Hulkenberg completed the top 10 positions.

What happened at the 2018 Japanese Grand Prix?

Hamilton secured an easy win at the 2018 Japanese Grand Prix and extended his lead in the drivers’ championship over Vettel to 67-points. Hamilton recorded his seventy-first career win and his ninth win of the 2018 season.

The race was marked by more misfortune for Vettel. After starting in eighth position, Vettel made rapid progress to fourth-place in the opening laps. But on lap 8, a clash with Verstappen saw him drop to the back of the field. Vettel battled back to sixth position but lost more ground to Hamilton in the title race.

Bottas finished in second position behind Hamilton for a second consecutive Mercedes 1-2 of that season. Verstappen completed the podium places, his third consecutive podium finish at Suzuka.

Ricciardo finished in fourth position behind team-mate Verstappen. Kimi Räikkönen and Vettel finished in fifth and sixth positions respectively. Pérez finished in seventh position and “best of the rest”. Grosjean, Esteban Ocon, and Sainz rounded off the top 10 positions

The 5.807 km Suzuka circuit with 18 corners (10 right-hand and 8 left-hand corners) with the high-speed ‘figure 8’ is one of the fastest tracks on the Formula 1 calendar with an average speed of over 235 km/h.

The cars are on full throttle 70% of the time and the fuel consumption is high. The brake-wear is low with heavy loads placed on the engines.

The drivers need to get these curves absolutely correct with quick gear changes and high loads are placed on the engine. The long sweeping left-hand Dunlop curve (Turn 7) ends the quick first sector.

Sector 3 (Turn 15 to Turn 18) starts with the iconic 130R (Turn 15). This is a flat out high-speed left-hand corner which has been altered due to safety concerns after major crashes in the early 2000s. This leads to the slow right-left chicane at the Casio triangle (Turns 16 and 17). The final right-hand corner (Turn 18) leads to the start-finish straight.

There is only one DRS zone this year at this circuit with many overtaking opportunities. The first DRS detection point comes before Turn 16, with the first DRS activation point after Turn 18.

The white-striped hard tyres (C1), the yellow-striped medium tyres (C2) and the red-striped soft tyres (C3) nominated for this race is the hardest compound of tyres from the Pirelli range of tyres. This was the same compounds of tyres nominated in Bahrain, Spain, Great Britain and the Belgian races.

The abrasive asphalt surface at this track leads to high tyre wear and degradation. The high cornering speeds also places high lateral loads on the tyres at this track. A one pit stop race was the norm among frontrunners in last year’s race.

The rain is never far away at this venue, with rain predicted on Saturday because of a typhoon set to hit the country. Overcast skies and a chance of rain could cause mixed weather conditions and a mix of strategies in the race.

What should we look out for this year?

Ferrari has been the in-form team with four pole positions in a row and three wins after the summer break. The Ferrari SF90 has performed well at power circuits like the Suzuka circuit. The aerodynamic upgrades to the car since the summer break has improved the downforce levels and led to an improved performance at all tracks as was shown at the Singapore Grand Prix.

Mercedes was on the backfoot in Sochi and a contra-strategy and Ferrari’s reliability issues helped the team record its first win after the summer break. The perfect record of the Silver Arrows at the Russian Grand Prix was under threat but kept intact.

Red Bull Racing after the summer break has fallen behind the top 2 constructors’ championship leaders, Mercedes and Ferrari. The Japanese Grand Prix is the home race for engine supplier Honda at their track in Suzuka. The team will be looking for a special performance in front of the home crowd and to make up lost ground.

McLaren leads the midfield battle with a comfortable 33-point lead over the Renault F1 team. The French team will be bringing significant updates to the car including a new front-wing to help them close the gap in the midfield battle.

With four races to go after this race, Mercedes can clinch the constructors’ championship if they extend their lead over Ferrari by an additional fourteen or more points.

How can I keep up with the action?

Follow all the action at the Checkered Flag with our extensive coverage, quotes and analysis of every session of the Japanese Grand Prix.