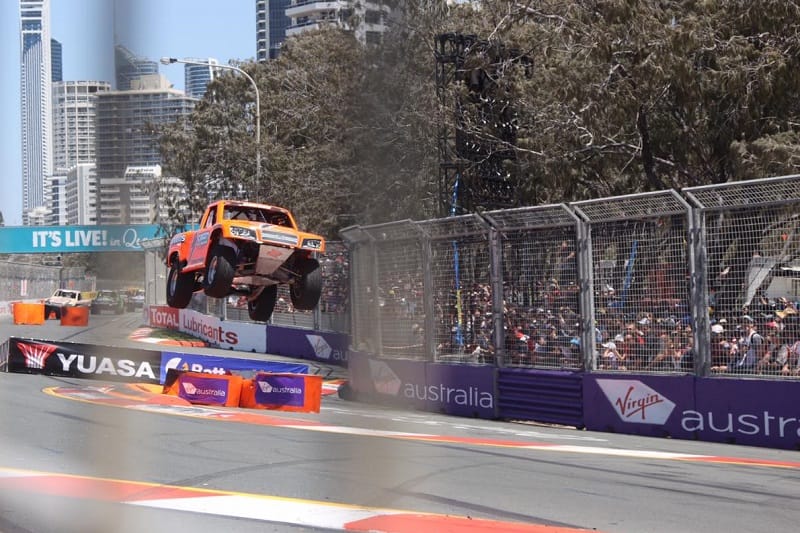 The Stadium Super Trucks‘ first Australian race in over a year saw Robby Gordon take the checkered flag in the Gold Coast 600 at Surfers Paradise. In the inaugural round under the Boost Mobile Super Trucks banner, Gordon took advantage of a final lap spin by the dominating Toby Price to score the victory.

Price, the reigning Dakar Rally champion and contesting his first SST race of 2019, led the field as it organised single file early in lap one. Before the chicane, Nolan got loose while landing off a jump and scraped the wall; he eventually exited the race. At the front, Price suffered a similar fate exiting the chicane and hit the barrier but recovered to maintain his lead. Morris, the 2017 champion, turned while racing Ingall in the final corner and fell to the back.

As Price led Biffle, his hood came off on the track, leading to a caution after three laps. At the yellow, the top three consisted of Price, Biffle, and Brabham. For the restart, Ingall was ordered to the rear after hitting a frontstretch chicane barrier but kept his position. The barrier would get knocked aside again on lap five.

Behind the top two, Potts and Brabham fought for third and Hynes and Gordon for fifth. On lap five, Morris took seventh from Harlien. As the trucks entered turns ten and eleven, the scheduled competition caution came out. By this halfway point, Price led Biffle, Brabham, Potts, Gordon, Hynes, Morris, Harlien, and Ingall.

Price paced Biffle to the lap six green flag. With the field battling for position, Brabham was unable to squeeze into a chicane as he fell to fifth. Biffle attempted to pass Price entering the frontstretch chicane but failed.

As lap seven began, a poor landing by Biffle allowed Gordon and Brabham to pass him and move into second and third, respectively. Gordon narrowed the gap on Price when they reached the last turn entering the white flag, enabling him to touch Price’s rear fender.

Brabham briefly took second from Gordon before they reached turn four. The three-way battle for first forced Brabham to skip a ramp, but he was not penalised as he did not gain any position.

Entering turn eleven, Brabham clipped Price and sent him into a spin, and Gordon capitalised on the contact to slip into the lead. A Brabham desperation move failed as Gordon held him off for his 24th career win and third of the year.

Brabham settled for second, followed by Harlien, Biffle, and Ingall. Price had to end his day in sixth, followed by Hynes, Morris, and Potts. Nolan did not finish the race.

By Justin Nguyen
2 Mins read
13-year-old Ben Maier, who has raced in a multitude of disciplines from karts and Legends cars to off-road and road racing, will add the Stadium Super Trucks to that list at Mid-Ohio.
Stadium SUPER Trucks

By Justin Nguyen
3 Mins read
Rookie Cleetus McFarland only needed to drive straight for a few more meters to win the Stadium Super Trucks’ Race #2 at Long Beach, but an awkward landing led to him spinning into the wall. Robby Gordon got by him to join his son Max as the weekend’s two SST winners.