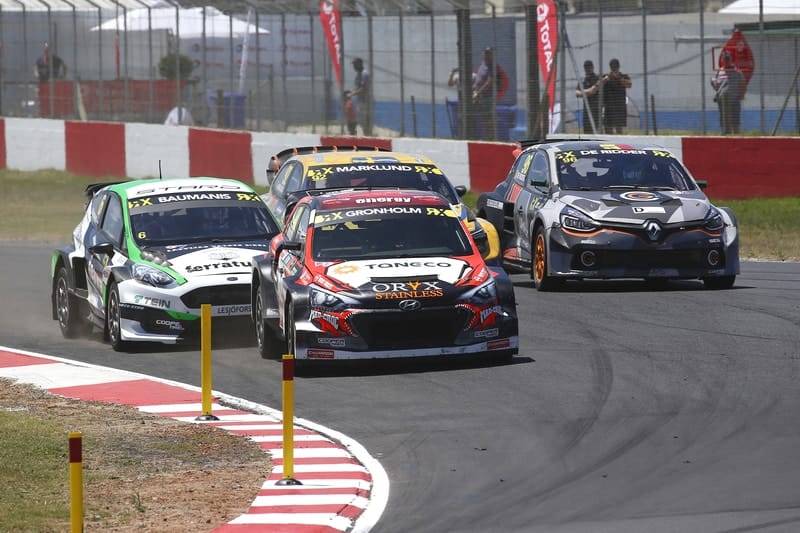 A blistering time by championship leader Timmy Hansen gave him the win in Q3 on the all important “Decider Day” in South Africa.

The session started off with the news that Liam Doran would be taking no further part in Q3 which, conveniently, gave Andreas Bakkerud pole for race one. There was clearly team tactics at play. Lining up next him in this five car race were Oliver Bennett, Guerlain Chicherit, and Matvey Furazhkin. Bakkerud easily took the lead into turn one as Bennett and Chicherit made contact. Bakkerud was on fire, setting fastest lap after fastest lap, and cruising to the win and to the fastest time of the weekend. Speaking afterwards he said; “The track conditions are very different to yesterday. I felt there was more in it but i’m still happy with the run”.

Race two involved Kevin Hansen, Janis Baumanis, Jere Kalliokoski, Timmy Hansen and Krisztian Szabo. As the ready-to-race light came on, the world feed dropped and we were left staring at a black screen for the entire race. The feed came back and we were greeted with an ecstatic Timmy Hansen who had just smashed the time set by Bakkerud in the previous race. Kevin finished just behind him. He said afterwards; “Those were the best four laps of my life. I knew today was important so i just went for it!“

The final race of Q3 saw overnight Top Qualifier Niclas Gronholm lining up next to Timur Timerzyanov, Guillaume De Ridder, Timo Scheider and Anton Marklund. It was a disaster for Gronholm as he jumped the start and was given an extra joker lap to do, ending his chances of winning the session. If anything, this fired him up even more. He took the lead into turn one as the rest of the field battled it out. There was some fantastic action between Timerzyanov, Marklund, Scheider and De Ridder as they fought for track position. Gronholm took his first joker on lap three, coming out three seconds in front of Timerzyanov. This gap was enough to see him take his second joker and come out in the lead and win race three. His time was still good enough for fourth! A stunning performance by the young Finn, but it could have been more. This meant that Timmy Hansen took the session win ahead of Bakkerud and brother Kevin.

Q4 gets underway in an hours time: https://www.youtube.com/user/RallycrossRXTV

By Ben Huntley
1 Mins read
The first round of the 2022 FIA World Rallycross Championship will not take place as planned this weekend (02/03 July). The launch…
Off Road

By Justin Nguyen
2 Mins read
Pro 2 trucks had won the Forest County Potawatomi Brush Run four of the last six years including the last two races, but the Pro 4 of C.J. Greaves capitalised on rainy conditions at Crandon to lead a Pro 4 podium lockout.
Off Road

By Justin Nguyen
2 Mins read
After three years, Cory Winner is finally a Pro 2 race winner after beating Jerett Brooks and Ryan Beat for the Championship Off-Road victory at Crandon on Saturday.