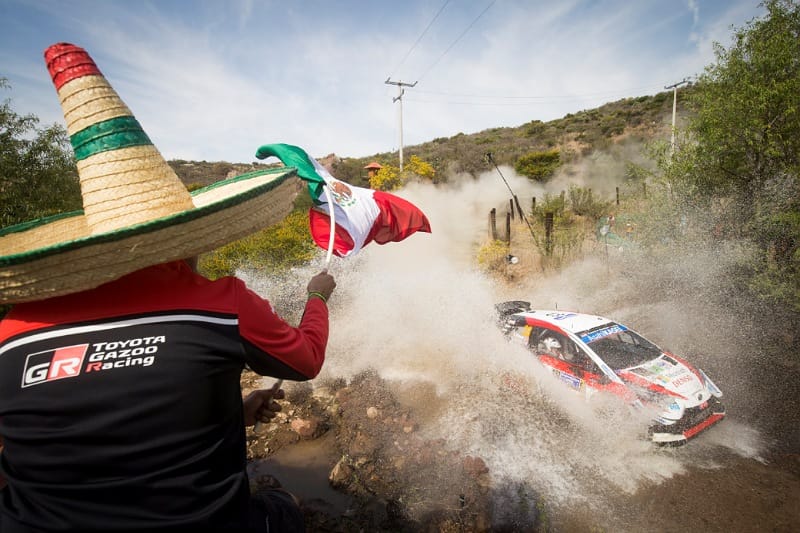 After the two-opening stages on the Thursday evening which were held on the city streets around Guanajuato, it is Evans who was second fastest after day one, posting two-second fastest stage times.

On the ten stages which will be run now during Friday, Evans will head out first on to the road.

“It’s always an incredible atmosphere to start this event – there’s no crowd like it. We perhaps don’t get to fully enjoy the ceremony because we have to go straight into two stages, but it’s still a great experience.” Evans said.

“It was an OK start for me, being second quickest on both stages. In shakedown I had a good feeling from the very first run. The car felt pretty good, so overall I’m happy. It’s a very long and tough event so we have to try and give our best effort and try and keep out of trouble.”

The Toyota team had a huge success on the shakedown earlier, as the five-time Rally Mexico winner Sébastien Ogier was third quickest but he is not happy about the rally due to the global coronavirus crises. After day one he is currently sitting sixth overall.

“It’s always special to be in Guanajuato for the start of this rally and to see the atmosphere there. My feeling this morning was not so good, with the whole situation in the world at the moment, but now I have to get that off my mind and focus on the rally. The car feels good and we have some good feelings, so it should be OK.” Ogier said.

There are only four seconds separating Kalle Rovanperä from the top as he ended his day one in eighth place. This is his first gravel rally in a WRC car and his second outing in Mexico. He relays on his setup on the car which he brought over from the pre-event testing, he knows the rally is really tricky.

“This is always a special stage to start here in Mexico, it’s a tricky one in the tunnels. The second pass was better – I just needed to do that on the first pass! In shakedown, the car felt really good, and the setup was really good following our pre-event test.” Rovanperä said.

“The feeling was nice, and it’s nice to be back on gravel. I don’t have so much experience on gravel in this car, but it’s a good surface for me and the feeling will get better all the time. For me, there will be many challenges this weekend, but my focus is just to drive without any mistakes as the stages are really technical.”

“It’s good to have all the cars cleanly through these first two stages tonight without any problems, ready for the real challenge to start tomorrow. Shakedown this morning was good for us, the drivers were happy with the car and with the setup. It will be a new situation for Elfyn to be the first car on the road on a Friday, so it was good for him to see in shakedown this morning that he can still set good times.” Kaj Lindström, Sporting Director, added.