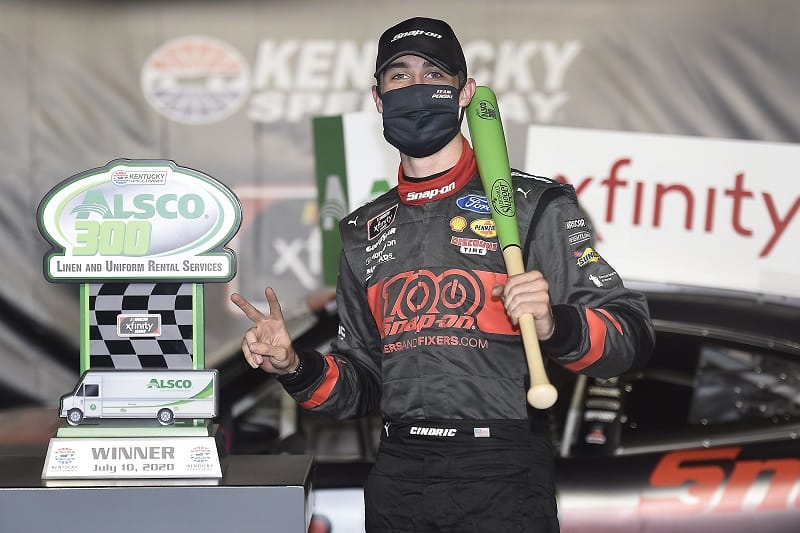 The last three days of NASCAR Xfinity and Gander RV & Outdoors Truck Series racing at Kentucky Speedway have produced a special pair of winners. Austin Cindric swept Thursday and Friday’s Xfinity races, while Sheldon Creed was in the right place at the right time to score his maiden Truck Series victory.

Cindric, long noted for his road course prowess with his sports car background and all three of his NASCAR wins prior to Kentucky coming on such tracks, finally broke through for his first oval victory in Thursday’s Shady Rays 200. He then proved it was no fluke by winning again in the following day’s Alsco 300. The dual victories were Cindric’s third and fourth career Xfinity triumphs, with his first two coming at Watkins Glen International and Mid-Ohio Sports Car Course in 2019; his lone Truck Series win was also a road race, at Canadian Tire Motorsports Park in 2017.

On both occasions, he had to hold off points leader Chase Briscoe, but it ultimately worked out for the Team Penske driver as he leapfrogs Ross Chastain for third in the standings. With the weekend sweep, Cindric became the first driver to win in the same series on back-to-back days since Richard Petty triumphed at Albany-Saratoga and Islip Speedways on 14 and 15 July 1971. Unlike The King, however, Cindric accomplished the feat at one track.

“I’m just so excited, this is all a credit to my team,” Cindric stated. “What we did tonight was really impressive because we came with one set-up last night and won the race and came with another set-up tonight and won again. That happens at the shop and with the guys on the box so all the credit to them, I’m the lucky one who gets to drive.”

A day later, the Truck Series’ Buckle Up in Your Truck 225 on Saturday afternoon provided an all-too-familiar experience for race fans: bad weather. When Stage #2 came to an end, lightning struck, forcing NASCAR onto the 30-minute delay that has become a mainstay on the 2020 NASCAR calendar. To little surprise, the rain followed, prompting NASCAR to declare the race official.

Creed had held off Ben Rhodes to take the stage win, placing him in first when the race was called. The 2018 ARCA Menards Series champion and winningest driver in Stadium Super Trucks history had never won in NASCAR’s national series until Saturday, with his best finish being second on two occasions since he began competing full-time in the Truck Series in 2019.

With the victory, Creed has qualified for the Truck Series playoffs. He had come close to doing so in his rookie season last year, a campaign that ended with a tenth-place points finish. “The Showstopper”, as he has been nicknamed since his SST days, is now second in the Truck standings behind Austin Hill with top tens in all but two races.

However, perhaps the biggest fireworks of the weekend came during the Xfinity doubleheader (which had been arranged due to COVID-19). After the Alsco 300, Harrison Burton and Noah Gragson engaged in a fight on pit road after the two had made contact late in the event that knocked Burton out of a top-ten finish. Burton confronted Gragson afterward, leading to a confrontation that included Burton pushing Gragson, followed by a right hook by Gragson.

As with most brawls, the scuffle resulted in an explosion of social media activity, though some have raised questions as to whether the two would be disciplined for violating NASCAR’s social distancing measures. Earlier on Friday, NASCAR issued a memo to teams ordering them to follow protocols in response to crewmen wearing their masks improperly or not wearing any protective gear entirely. The memo described these actions as “pockets of complacency that left unchecked will threaten our ability to continue racing. […] One cluster outbreak can derail our season.”

The Cup Series wraps up the Kentucky weekend with the Quaker State 400 on Sunday. Kurt Busch is the defending winner.

By Justin Nguyen
2 Mins read
Brian Brown, a five-time champion at Knoxville Raceway, will make his NASCAR Truck début for Kyle Busch Motorsports when the series heads there in July.
NASCAR Truck Series

By Justin Nguyen
1 Mins read
Ryan Reed, a 2-time Daytona Xfinity winner, will return to NASCAR for the first time since 2019 when he runs Saturday’s Truck race for CMI Motorsports.