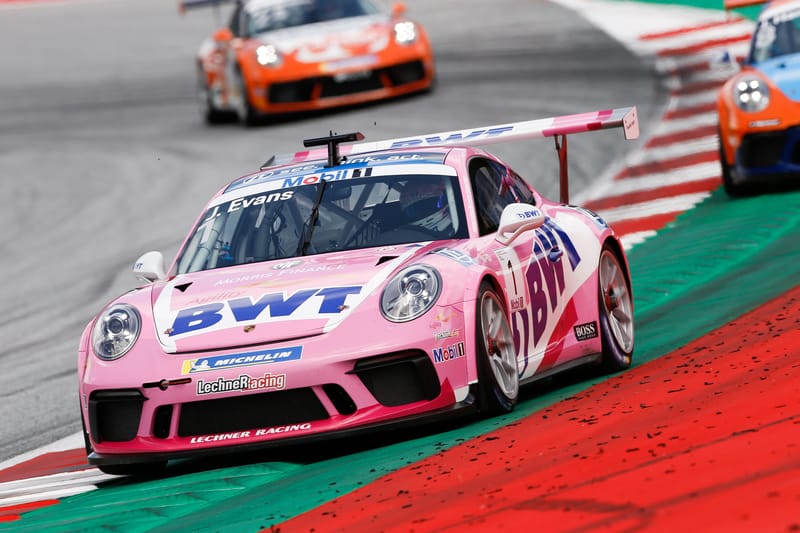 Porsche Junior Jaxon Evans left it to the closing minutes to secure pole position ahead of the first race of the 2020 Porsche Mobil 1 Supercup season at the Red Bull Ring in Austria.

For most of the 30 minute session it was looking like the top spot was out of the reach of the New Zealander, but after spending some time in the pits with his team and a change of tyres he pushed on in the closing stages of the session to secure pole position with a time of 1:30.593, 0.115 seconds faster than Frenchman Florian Latorre.

“At first I didn’t quite get the brake balance right,” explained Evans. “But once I switched tyres everything went smoothly. Pole Position – I’ve achieved my first goal for the opening round.“

There was a brief red flag period as the marshals recovered Frenchman Philippe Haezbrouck’s stricken Porsche from turn 4 after he out braked himself and spun in to the gravel trap.

Haezbrouck’s CLRT teammate Latorre had a much better session, after finishing at the lower end of the times in practice, he secured second place for the new French team on their debut, Latorre later commented “I didn’t expect this.”

Leon Köhler had a promising start to his first full season in Porsche Supercup as the German rookie finished the day in third place.

After finishing the practice at the top of the timesheets, Dylan Pereira put in a strong performance to claim a second-row start and will certainly challenge for a podium finish on raceday.

2019 Vice Champion Ayanacan Güven took fifth place in the close qualifying session which saw the top 16 drivers covered by less than a second. Güven will be looking for a better race than last year after a collision in the opening stages of the race saw him retire with suspension damage.

Another driver that has seen some Supercup action in the past but will be competing in his first full season this year is Frenchman Jean-Baptiste Simmenauer, finishing the first qualifying of 2020 in sixth place, an impressive start for the young driver.

Race winner Larry ten Voorde was the best driver from the all-Dutch GP Elite team as he took seventh place. While ten Voorde would have hoped for a better starting position, he has shown his pace in the past and has what it takes to challenge at the front.

History was made during the session as Mateo Llarena became the youngest driver to compete in a Porsche Supercup session. The MRS GT-Racing driver, who is 16 years, four months and nine days, finished down in twenty-first place, but is hoping for a stronger race, “I still lack experience with the Porsche 911 GT3 Cup. I think I could do a little better in the race,” commented Llarena, who is also the first driver from South America to contest an entire season of the Porsche Supercup.