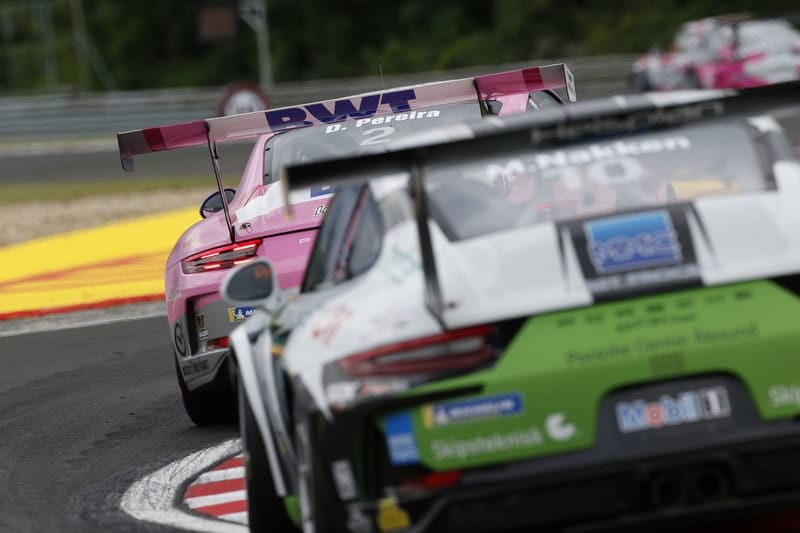 Dylan Pereira secured the fastest time in qualifying for BWT Lechner Racing ahead of the Porsche Mobil 1 Supercup round at the Hungaroring, becoming the third driver to take the top spot in as many races this season.

The Luxembourger continued his strong form from the last race in Austria that saw him take victory to finish the session three-tenths of a second faster than Porsche Junior Ayhancan Güven. The impressive lap highlighted the pace that Pereira had as he explained “I got a perfect free run,” afterwards.

Following his first run, Pereira was confident, “I still had reserves and knew that I had room for improvement,” he reported.

After returning to the pits for fresh set of tyres and a suspension tweak he headed out on track again, “I wanted the rear axle to be less twitchy so that the tyres didn’t overheat and could function perfectly over two laps.”

“The second attempt is normally faster than the first because a lot of rubber is left on the track, which gives the asphalt better grip. That might sound strange, but the tyre rubber from other racing series doesn’t give us much of an advantage,” explained Pereira.

“I didn’t do as well in the rainy practice on Friday, so I’m hoping for dry weather,” Pereira concluded.

While Güven missed out on the top spot, he was happy to be starting the race from the front of the grid as he lines up alongside Pereira. “Starting from the first row of the grid is very important at the Hungaroring. I’ve achieved that goal. If it rains on Sunday, the cards will be reshuffled anyway.” said the 2019 Rookie Champion.

Marvin Klein and Leon Köhler showed that this years rookies cannot be discounted as they lined up on the second row ahead of Larry ten Voorde and Porsche Junior Jaxon Evans.

The fastest driver in the ProAm classification was Roar Lindland who took thirteenth overall.

By Vince Pettit
2 Mins read
Jaxon Evans tops the times to take pole position for the opening race of the 2020 Porsche Mobil 1 Supercup season as history is made in the series.