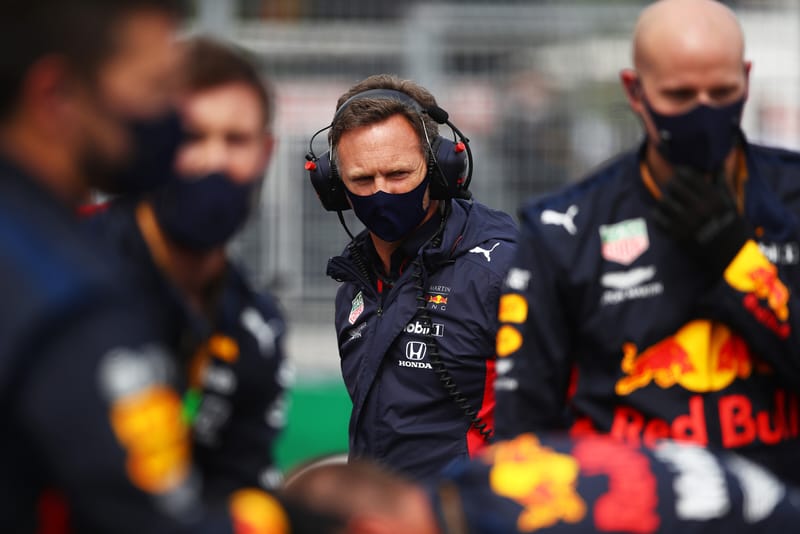 Christian Horner had reflected on Aston Martin Red Bull Racing‘s Hungarian Grand Prix display, as he has expressed how happy he was that the team were able to “bounce back” from a struggle in qualifying.

Red Bull expected to struggle during the weekend as both RB16 cars seemed off-balance, and the qualifying session on Saturday proved they had issues. However the team rose up the grid on race day, with Max Verstappen managing to split the two Mercedes AMG Petronas Formula One Team drivers in second, while Alexander Albon made his way from thirteenth into fifth.

Horner started out by giving praise to the mechanics at Red Bull because of the fixes they had to make to Verstappen’s car prior to the race. Verstappen found himself in the barrier at the Hungaroring on his out-lap to the grid and he broke his front wing and suspension, with Red Bull having to replace and repair his car on the grid.

“The mechanics did an amazing job today and Max owes this result to them,” said Horner. “To get his car repaired in twenty minutes on the grid is incredible and you could see the sweat dripping off them.

“The guys have been doing an amazing job, especially with the amount of specification changes we’ve had this weekend, as well as breaking curfew on Friday night.”

Horner explained how he felt regarding the qualifying that the team had, as they struggled and found themselves down the grid. However Horner stated his positivity for the performance which both Albon and Verstappen put in.

He pointed out how well Albon had performed as the Hungaroring is often a track which is hard to overtake on but he managed to battle his way past the likes of the Scuderia Ferrari‘s to fifth.

“We were obviously on the ropes in qualifying yesterday so to bounce back and split the Mercedes with a P2 here is great. Max drove the wheels off the car and Alex drove a great race too.

“Considering where he started from on the grid, he put the lap times in and all credit to him as the passing moves he did today made for a great recovery drive.”

Horner communicated the team still have a lot to learn around the car and that the team have a lot of improvements to make. He then stressed how the team need to understand what they know before the British Grand Prix next week.

“The car is in better shape in race trim and strategically we are sharp but we have updates that aren’t behaving as expected, compared with pre-season testing, so we need to go through all the data we’ve collected and understand it before Silverstone.”