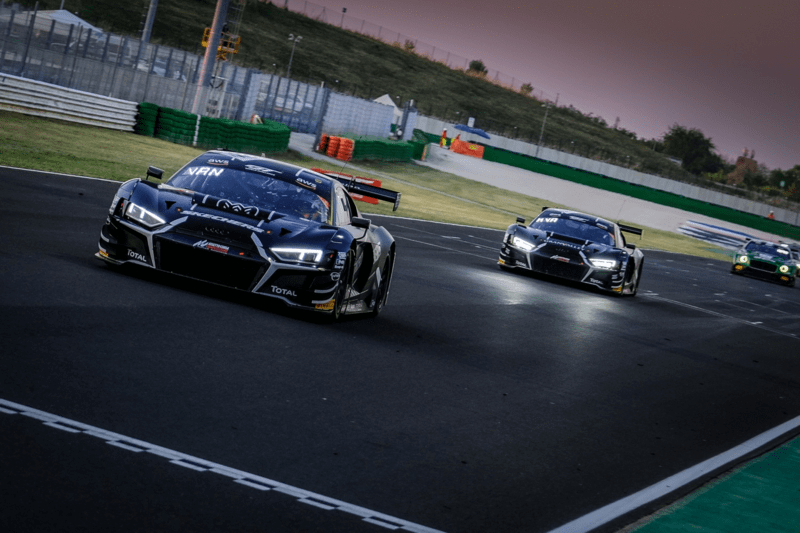 The first race of the 2020 GT World Challenge Sprint Cup at the Misano World Circuit Marco Simoncelli yielded a first and second for the Belgian Audi Club Team WRT squad with #32 car shared by Dries Vanthoor and Charles Weerts taking the top spot.

The day started off well for the Tech 1 Racing Lexus of Thomas Neubauer and Aurélien Panis by not only topping the pre-qualifying session but also obtaining pole for race one which was to be run in the evening.

Neubauer started from the front row and duly headed into the lead in front of the #107 CMR Bentley of Jules Gounon. Weerts started the winning Audi from fourth place however he ended up dropping back two places as Ryuichiro Tomita and Luca Stolz in the #4 HRT Mercedes-AMG both went made their way passed. The teenager then re-overtook the German driver and ran behind teammate Tomita until both capitalised on an error from Jim Pla, who started third for his #89 AKKA ASP machine, to move up another position.

All this meant the WRT cars were third and fourth, although with a big gap to the lead cars of Neubauer and Gounon. The French duo were in an intense battle throughout the first half of the race with Neubauer never really gaining a substantial gap upon his rival.

The Tech 1 Lexus was first to make its mid-race pit stop, with Neubauer handing over to Panis. Gounon remained out for one lap longer, and after a fast pitstop from the CMR crew Nelson Panciatici came out in the lead. Heartbreakingly the Lexus began to slow with a technical problem, which meant Panis had to retire from the race.

This left Panciatici with a seven-second advantage over the pair of WRT cars that now had Vanthoor and Kelvin van der Linde at the wheel although running in reverse order due to Vanthoor jumping in front of the sister car.

Although Panciatici looked to have the gap to second under control a late safety car meant his advantage was wiped out. Mattia Drudi, driving the #55 Attempto Racing machine, made contact with Silver Cup leader Benjamin Hites at the wheel of the #89 AKKA ASP Mercedes-AMG at turn 8. This lead to the Chilean driver being stranded in the middle of the track. Most of the other drivers managed to avoid making further contact whilst avoiding the car however Hamza Owega was unlucky and hit the stricken Mercedes.

On the restart the WRT pair were right behind Panciatici, and Vanthoor promptly dived up the inside of the Bentley at turn six. The Frenchman fought back trying to regain the lead but it left himself vulnerable to an attack from Van der Linde, and made the move into second place.

The two Audis stayed as they were all the way to the finish to continue their delayed season in emphatic fashion after their win at Imola.

The CMR Bentley of Panciatici and Gounon scored a third place in only the team’s second event with the British manufacturer. Fourth went to the #4 HRT Mercedes-AMG, with Maro Engel making up further positions during the second stint after Stolz’s early progress. The #25 Sainteloc Racing Audi of Christopher Haase and Arthur Rougier completed the top-five.

The Sainteloc Racing squad obtained the Silver Cup honours thanks to Simon Gachet and Steven Palette, while Madpanda Motorsport took runner-up spot to earn its maiden class podium. Pro-Am victory went to the #93 Sky Tempesta Racing Ferrari of Eddie Cheever III and Chris Froggatt, which came out ahead of a close battle with the #20 SPS Automotive Performance Mercedes-AMG of Valentin Pierburg and Dominik Baumann.

Sunday sees race two being started with Raffaele Marciello on pole after setting the fastest time in qualifying two. Qualifying three gets underway in the morning for the final race in the afternoon.

By Josh Disborough
1 Mins read
Sky Tempesta Racing have announced that they are going to return to the Fanatec GT World Challenge Europe Powered by AWS for the 2021 season to defend their Pro-Am title double from last year.
Endurance RacingFIA WECNurburgring 24 HoursNürburgring Endurance SeriesPorsche Series