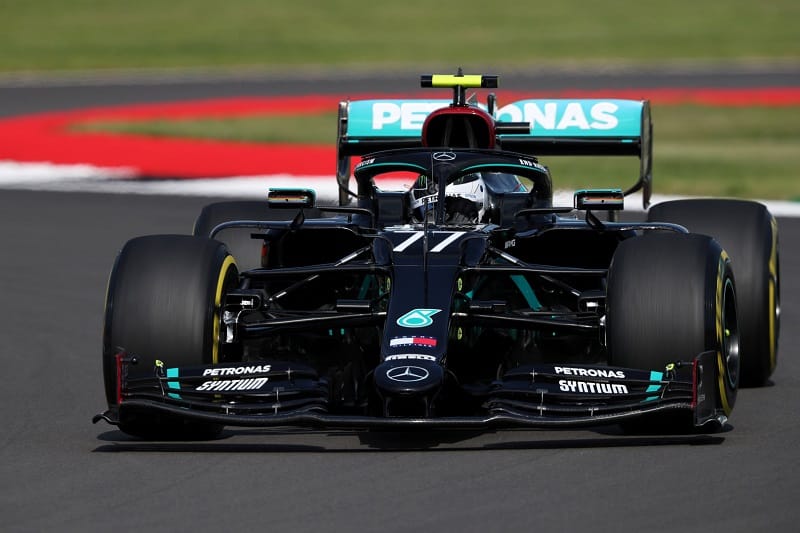 Neither driver stood out from the crowd during either of the opening two sessions on Friday, but in cooler conditions, the two W11’s were able to improve on their performances from the day before to finish first and second fastest, current championship leader Hamilton 0.138s behind team-mate Bottas’ best lap of 1:25.873s.

Both drivers made mistakes during the session, perhaps due to the wind being inconsistent around the track, but the Mercedes duo outpaced the rest of the field, a field led by Aston Martin Red Bull Racing’s Max Verstappen.

Verstappen ended 0.300 seconds behind Bottas’ best to at least put him in sight of the leading duo, but team-mate Alexander Albon, who crashed heavily at Stowe during second practice on Friday afternoon, endured another difficult session.

Albon’s tough weekend continued as he was forced to wait in the pit lane for the first forty-five minutes of the session as his mechanics fixed an electrical issue on board his RB15.  The Thai driver was ready to leave the pit lane early in the session before he was urgently told to vacate his car before the mechanics took to taking off the floor and repairing the issue.

His first flying lap saw him run off the track at Copse, with the track limit regulations at the turn seeing the time deleted.  He ended up down in thirteenth, more than a second down on Verstappen and with a lot of work to do to get the confidence in his RB15 before Qualifying.

Lance Stroll continued the impressive start to the weekend for the BWT Racing Point Formula One Team, but the young Canadian will be scratching his head somewhat after ending up more than seven-tenths of a second off the pace.

Stroll’s new team-mate for this weekend, Nico Hülkenberg ended up ninth, but was less than three-tenths of a second behind as he continues to learn about the RP20.

Both McLaren F1 Team drivers were happy after Friday’s running thanks to updates brought to Silverstone, and they showed good pace on Saturday morning, Carlos Sainz Jr. finishing fifth and Lando Norris seventh, either side of the leading Scuderia Ferrari of Charles Leclerc.

The second Ferrari of Sebastian Vettel once again had the worst of the luck, with more braking issues sending him to the pit lane for repairs before he could attack for his last Qualifying simulation.  The delays and loss of track time meant he ended the session down in fourteenth, although it is his best placing of the weekend after a terrible Friday.

Daniel Ricciardo broke into the top ten for the Renault DP World F1 Team in eighth, while Pierre Gasly did likewise for Scuderia AlphaTauri Honda in tenth.  Their respective team-mates, Esteban Ocon and Daniil Kvyat, were twelfth and eleventh respectively.

At the back were the Haas F1 Team, Williams Racing and Alfa Romeo Racing ORLEN drivers, with Romain Grosjean leading them all in fifteenth ahead of George Russell and Antonio Giovinazzi, with Kevin Magnussen, Kimi Räikkönen and Nicholas Latifi completing the field.

Qualifying for the British Grand Prix takes place this afternoon, and based on the pace showed on Saturday morning, it would be hard to back anyone not driving a Mercedes to take pole position.  However, there are dark clouds around Silverstone and rain is a possibility, and it would certainly spice up the action should it arrive.

Pierre Gasly: “After the win in Monza, Mugello showed what can happen in sport”

By Paul Hensby
3 Mins read
In the space of week in Italy, Pierre Gasly experienced the highs of winning at Monza and the lows of a first lap retirement at Mugello.
Formula 1

Daniil Kvyat: “There is always a special feeling for me when I’m in Sochi”

By Paul Hensby
2 Mins read
Daniil Kvyat is excited to race in front of his home fans this weekend in Sochi, with the Russian aiming for third consecutive point’s finish.
Formula 1

By Jasmine Butler
2 Mins read
Toto Wolff congratulated the hard work of everyone in the Formula 1 community for a busy couple of months ahead of the Russian Grand Prix.