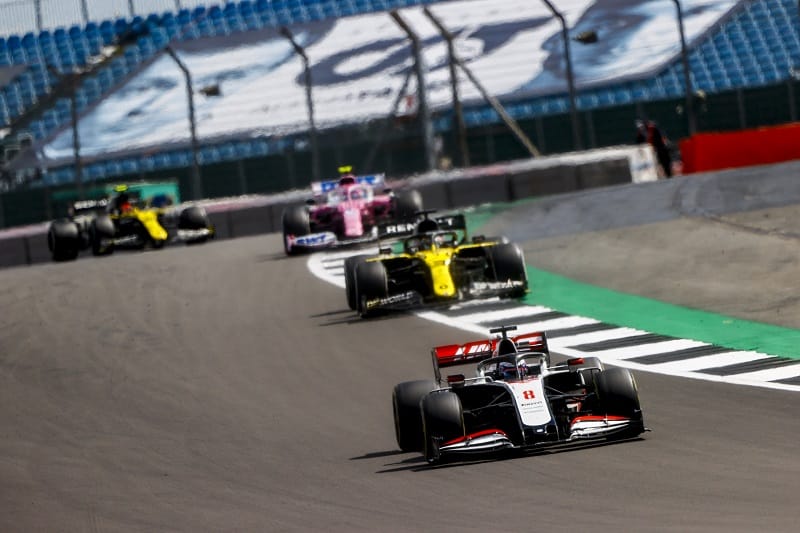 Romain Grosjean was left frustrated after the British Grand Prix, with the Frenchman feeling his performance deserved more than a sixteenth-place finish.

The Haas F1 Team driver gambled on not pitting during the second safety car period at Silverstone and ran as high as fifth as a result.  He dropped a couple of positions on track, notably to Carlos Sainz Jr. and Daniel Ricciardo, but his pit stop saw him lose time as he was unable to engage a gear.

The delay cost him ten seconds and left him with a mountain to climb, and although he was able to move up one place ahead of Alfa Romeo Racing ORLEN’s Kimi Räikkönen, he couldn’t better sixteenth despite being on the limit throughout the fifty-two-lap race.

“It’s disappointing, the result, as I drove to the absolute limit from the beginning to the end of the race,” said Grosjean.  “The first stint was fun. I found myself up in fifth behind the safety car and I was like ‘oh, just like the good old days.’

“I was happy to stay out, we have to try these things with our car – just like we did in Hungary. I was a bit sceptical for the restart on the tyres, but it worked well, and I could keep the pace. I was happy and having fun.”

Formula 1 remains at Silverstone for the 70th Anniversary Grand Prix this week, but Grosjean does not feel much will change between last weekend and next, although he is expecting more pit stops as Pirelli are bringing softer tyres this time around.

“I don’t think much is going to change for next week,” added Grosjean.  “I think the order will stay the same, but obviously there’ll be a bit more degradation in the race – so maybe it’s a two-stop race, which I’d rather have, a one-stop is a bit boring.”

Team-mate Kevin Magnussen’s race was over before the end of lap one after a collision at Club Corner with Aston Martin Red Bull Racing’s Alexander Albon, who was handed a time penalty for his part in the incident.

Magnussen clipped the kerb in the penultimate turn and gave Albon a run on the Dane, but the move was clumsy as the two came to blows, with the Haas driver coming off worse as he spun around and into the barriers to end his day.

“I’m all good after the accident, just very frustrated,” said Magnussen.  “I had made a great start – again, gained a couple of positions. I’d felt that the car was good on the way to the grid and I said to my engineers that the car was working really well.

“I’m gutted to be out as maybe we could have done something today. We had done everything we could do. We’d qualified as best as we could, then I got a great start – it was a good first lap with the positions gained, we were close to the top 10. It was looking good, I’m very gutted.”

Guenther Steiner, the Team Principal at Haas, was pleased with how Grosjean was able to stay in contention inside the top ten early on before a pit stop issue dropped him away from contending for the points.

Haas took the gamble to stay out whilst everyone else pitted at Silverstone, moving the Frenchman up to fifth, and although he dropped a handful of places to obviously faster cars, he was still inside the top ten when he pitted, only to fall to the rear of the field.

“I would say it was an interesting day,” said Steiner.  “As much as the disappointment is high, the positives we take out of it is that the drivers like the car, they like how it drives – we just need to get faster with it.

“Romain (Grosjean), once he was in the mix, he could almost keep up with the other cars and in some cases, he was faster – so that’s a good sign. Unfortunately, on his pit-stop, he couldn’t engage the gear and we lost 10 seconds. That took us out of the chance of scoring a point, I’m saying one point – not plural.”

Steiner feels luck hasn’t been on Haas’ side so far in 2020, as proven by Magnussen’s first lap incident, but at least there were positives to take away from the first Silverstone weekend as the team showed they were in good shape on race day.

He acknowledges that the team now know they need to work on their Qualifying pace if they want to be genuine contenders for points.

“Kevin (Magnussen) was taken out on lap one, so there’s not much more to say on that one,” said Steiner.  “It’s our destiny at the moment that we don’t have any luck.

“The good we take away from here is that when we are in the mix in the race, we can be there. We still have to work on qualifying. So, it was an interesting race. We didn’t end up with a point, but everyone’s doing a good job, working hard, and sooner or later we’ll score again.”