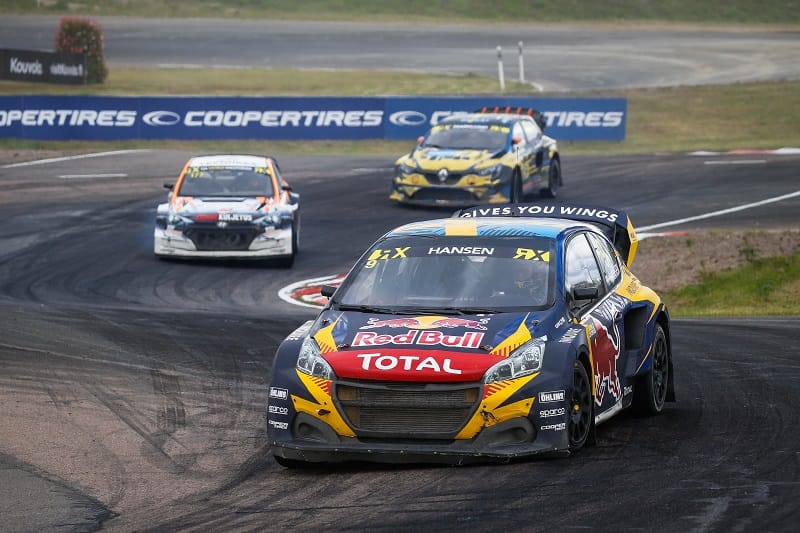 Kevin Hansen fought his way to the final on the opening day of action at the World RX of Finland. A tough grid draw for Q1 put him in traffic and this carried on for most of qualifying but he did enough to get a second row start for the semi-finals.

In the semi-finals, Hansen was pushed out wide at turn one but opportunistically dived down the inside of Timo Scheider and Robin Larsson at the next turn to qualify for the final.

A mistake in the final over the jump prior to turn six cost him any chances he had to get onto the podium as he finished in sixth. Nevertheless, Hansen was relatively pleased with his day considering the circumstances.

He said: “My position in the grid draw made things harder for me today. But we did everything that we could in all of our races to make up for that. Our starts weren’t great today, which doesn’t help when you’re starting from the outside either, so I definitely achieved about the best I could given the circumstances.

“In my semi-final, I got stuck on the outside and got a hit from behind coming up to turn two, which spun me a bit towards the inside. Then I saw there was a gap and I went into it. I really have to look at the replay because while from inside it felt quite nice, everyone else is saying it looked absolutely mega from the outside! But it was nice to get some good luck there after some bad luck before then.“

A better qualifying draw for Hansen tomorrow gives him hope to get onto the podium in Finland but he is keen to keep picking up points knowing that consistency is important.

“Myself and Timmy definitely had the same speed today, there’s no question about that. The target tomorrow is to continue our general improvement, keep collecting points, and be in a position to take advantage of every opportunity that arises. Tomorrow should be good as I’m starting P2 in my Q1 race and I’m hungry to fight back.”

By Nigel Chiu
1 Mins read
Latvia was a better weekend for Liam Doran considering the misfortune he has had so far in the 2020 World RX season, but he still thinks there is a lot more to come from him and the car.
FIA World Rallycross

Timmy Hansen: "The team hasn't made a single mistake all weekend.”

By Pontus Lindroos
2 Mins read
Timmy Hansen believes he and the Hansen team are slowly making progress towards the front of the 2020 FIA World Rallycross Championship.