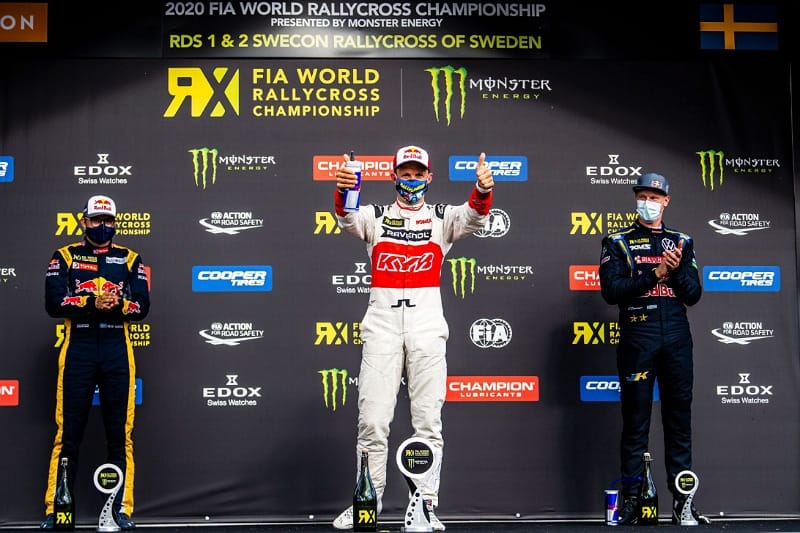 The new for 2020 FIA World Rallycross Championship team KYB Team JC run by the JC Raceteknik team with the team manager Joel Christoffersson made their World RX debut at Höljes last weekend and claimed a podium on the opening-round and took a win on the second round.

Ekström, the founder of the EKS team that run the cars in the World RX previously, claimed a second place in the opening-round as he couldn’t find a way pass the double World RX champion Johan Kristoffersson who won the race.

On the second round of the double-header at Höljes, things were turned around as Ekström managed to set the fastest lap of the weekend, chasing down Kristoffersson for a win in the final. As Kristoffersson went in to the joker, he gave everything to come in-front of Ekström, so hard that he nudged the two track markers that gave him a warning and a 5 second penalty, but Ekström was already passed Kristoffersson at the merge meaning that Ekström took the win but had to fight hard for it.

“It was a fun weekend and we had the pace on both days. It’s always extra enjoyable to win, it’s not every time you do that in motorsport. Everyone in KYB Team JC has fought as hard as they could to achieve this result. The best part for me has been to see the joy and passion in the team. That is the secret to success, which has been fantastic.” Ekström said.

“That we could lead the Teams’ Championship with 28 points straight away, I wouldn’t have guessed that if anyone had said it before the weekend. Also to be just two points behind Johan [Kristoffersson] in the Drivers’ Championship is nice for the whole team, but the season is long and these were just the first rounds.”

“Right now we are working on a solution for me to be able to drive in Finland next weekend, after that it looks more difficult. I have no budget to do anything other than take one race at a time, I also have other commitments that clash with World RX, so we will just have to see.”

“This feels absolutely fantastic. As a team to win a World Championship event for the first time, this is really big for us and something we will never forget. We could never have dreamed this would happen already in the first weekend as a World RX team. The goal is to fight to win the Teams’ Championship, and to continue to fight for victory in the Drivers’ World Championship.” Christoffersson added.

“Mattias excelled this weekend. Robin also showed a very high level, so it was a shame he had the puncture in the final today, otherwise we would have had two drivers on the podium. We’re already focusing on next weekend in Finland.”

IMG to Quit World RX Promotion at End of Season