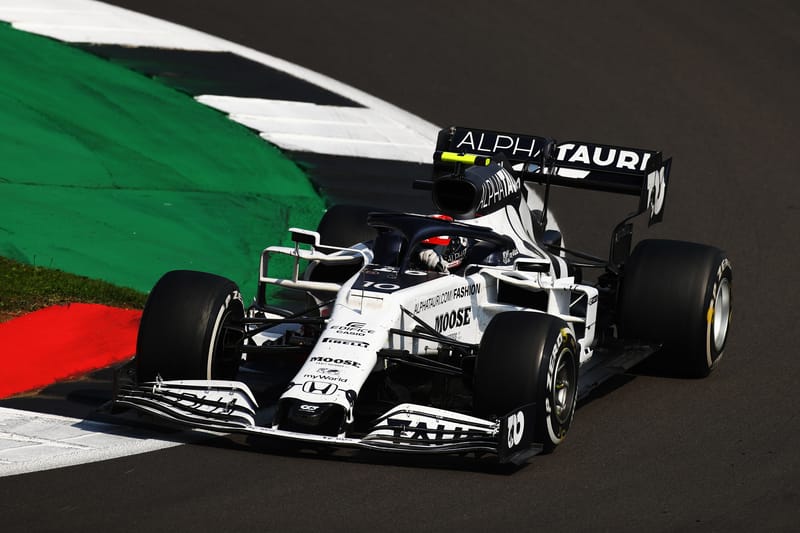 Strategy was a double-edged sword for Scuderia AlphaTauri Honda at the 70th Anniversary Grand Prix, as Daniil Kvyat fought into the points to finish tenth while Pierre Gasly fell to eleventh in what could have been a double points day for the team.

After a scary crash during last weekend’s British Grand Prix, Daniil Kvyat came back to Silverstone with a vengeance, clawing into the points to finish tenth after a less than ideal sixteenth place starting spot.

Ecstatic to have gotten points this weekend, Kvyat believes better performances on Saturdays will be the key to more points finishes on Sundays.

“I’m very satisfied today, I felt like it was a mega race. As a team we did a great job, we were able to squeeze everything out of the car and I think today’s result was the maximum on the table,” Kvyat said.

“We took every opportunity that came our way and, unlike last week, we were able to capitalize on them. I generally feel quite strong on Sundays, but we definitely need to put it together on Saturdays, as starting the race from a better position would make things much easier to regularly fight for points.

“However, starting from P16 and finishing tenth to score one point makes us happy today.”

This extra point puts Kvyat level with Antonio Giovinazzi in the driver’s championship at two points. However, Kvyat stays in sixteenth place as Giovinazzi has the better finish of the two, finishing ninth in the Austrian Grand Prix.

On the other side of the paddock, Pierre Gasly was frustrated with the strategy that led to him finishing outside of the points after starting in seventh place.

Despite feeling comfortable on his first stint, the team brought Gasly in early for his pit stop which put him into traffic when he re-joined, forcing him to wear out his tyres faster to make up positions that ultimately he shouldn’t have lost.

“I had a good start and also felt quite comfortable with the tyres on the first stint, so I was a bit surprised when I was called in for the first pit stop earlier than we had planned before the race,” Gasly said.

“I think we tried to cover [Alexander] Albon but actually, that wasn’t really our race. Once back on track, we found ourselves in traffic and I had to push more than I would have liked on the tyres to make up a few positions. This caused massive blistering after a few laps, so from there on the race was pretty much a nightmare.

“I’m quite disappointed because I think there was something more to achieve today. We need to review what we could have done better strategy-wise and get back into the points in Barcelona.”

Gasly was lucky that Sebastian Vettel finished outside of the points in twelfth, allowing the Frenchman to hold onto twelfth in the driver’s championship, holding a two point advantage over the four time world champion.

Technical director Jody Egginton admitted that it was indeed their strategic error that cost Gasly points.

“Today we had the cars and the drivers to score points on both sides of the garage and, although we have managed to achieve this with Dany, unfortunately, we have not executed the best race for Pierre,” Egginton said.

“This has compromised his race and cost him points, which is, of course, not only disappointing for the team but also Pierre. He has shown good and consistent performances here over the last two events, but we have just not provided him with the best strategy to deliver his best race today.”

“…Pierre started from P7, he had a good start and in the first few laps, he defended his position well showing good pace,” Tost said.

“However, we clearly made a mistake strategy-wise, as we called him in too early for his first pit stop. With the second set of base tyres, he quickly started to suffer from blistering on the rear so it was difficult for him to catch up, which meant we had to call him in again.

“His last stint was quite long and he did what he could, but there were no points for him today.”

AlphaTauri maintain a comfortable seventh in the constructor’s championship, sitting 22 points behind Renault DP World F1 Team in sixth, and 12 points ahead of Alfa Romeo Racing ORLEN in eighth going into next weekend’s Spanish Grand Prix.