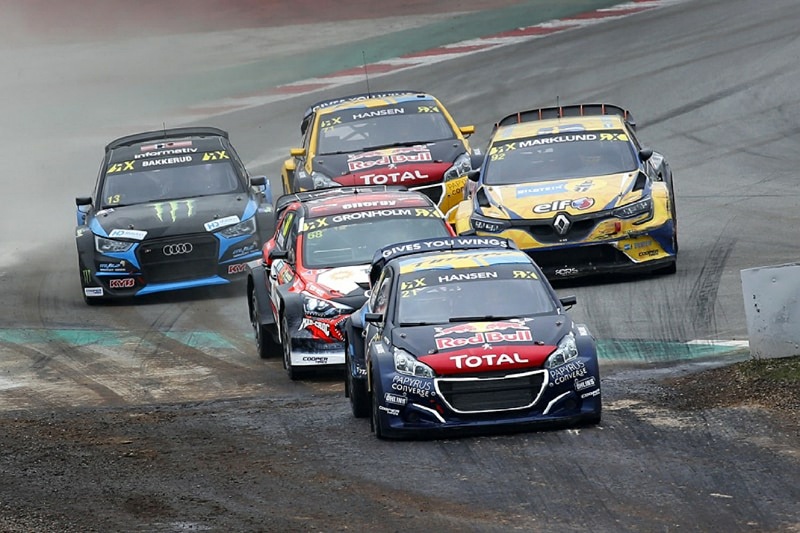 The 2020 FIA World Rallycross Championship has reached mid-season after three double-headers hosted in Sweden, Finland and Latvia, it is now time for the double-header number four as they head down to sunny Spain for rounds 7 and 8 held at the Formula 1 circuit near to Barcelona on 17-18 October.

This entry list sees the biggest starting grid of the season so far, with a total of 20 Supercars to be racing in the high octane and flame-spitting World RX class.

After winning three rounds of six being held so far, it is the two-time World RX champion Johan Kristoffersson who leads the championship at the moment, sitting in second is Mattias Ekström who has replaced Janis Baumanis so far this season in the Audi. Ekström doesn’t appear on the start list but you can be sure he will race there if he gets the permission from his partners.

Joining the permanent drivers for this weekend is the former World RX regular Oliver Bennett from United Kingdom, he will bring his colourful XITE Racing Mini Cooper SX1 to Barcelona.

A newcomer in the World RX is the former European Super 1600 driver Luigi Gyula Lajos from Hungary, Luigi has been seen testing the ES Motorsport run Škoda Fabia in Finland and in Latvia this week.

Juha Rytkönen from Finland who shocked all by his performance in Kouvola by challenging the top drivers, was always within the top five and claimed a second place finish on the Saturday, will be entering in the Ferrarum Team runned Ford Fiesta instead of the team owner Jani Paasonen that weekend.

The Euro RX regular Tamas Karai from Hungary will be making his second appearance in the championship this season and rounding out the list are France’s Patrick Guillerme in a own built Hyundai i20 that he debuted with in Euro RX in Lohéac last season and the Belgian circuit racing legend Enzo Ide who has appeared on some of the lists earlier but hasn’t shown up due to other commitments.

The event will also see the two-first rounds of the 2020 FIA European Super 1600 Rallycross Championship, becoming the second series of this year to use the double-header format.

Here also it is a strong entry list, with 23 drivers from 10 nationalities joining the roster in Barcelona. The defending Euro RX champions Volland Racing will be fielding a five-car Audi A1 entry where Marat Knyazev from Russia is the new signing. Knyazev will be joining the last year’s line-up of Yuri Belevskiy, Gergely Marton, Timur Shigabutdinov and Artur Egorov.

From Norway there are five drivers entered that weekend, Marius Bermingrud will be racing in the Tedak Racing runned Alfa Romeo MiTO, Ole Henry Steinsholt in a Škoda Fabia and Espen Isaksætre in a Peugeot 208.

The fellow countrymens Marius Solberg Hansen and Martin Kjær in a Citroën DS3 and a Ford Fiesta respectively, who are entered as wildcards this weekend.

The reigning RX Academy champion Rasmus Tuominen from Finland will be joining the Super 1600 powerhouse SET Promotion in a Renault Twingo as the team makes a comeback to the series.

European Rally Championship regular Jan Cerny from Czech Republic will be debuting in the Škoda Citigo and rounding up the list of the newcomers are Mikhail Simonov from Russia in a Renault Twingo and Joao Ribeiro from Portugal in a Škoda Fabia.