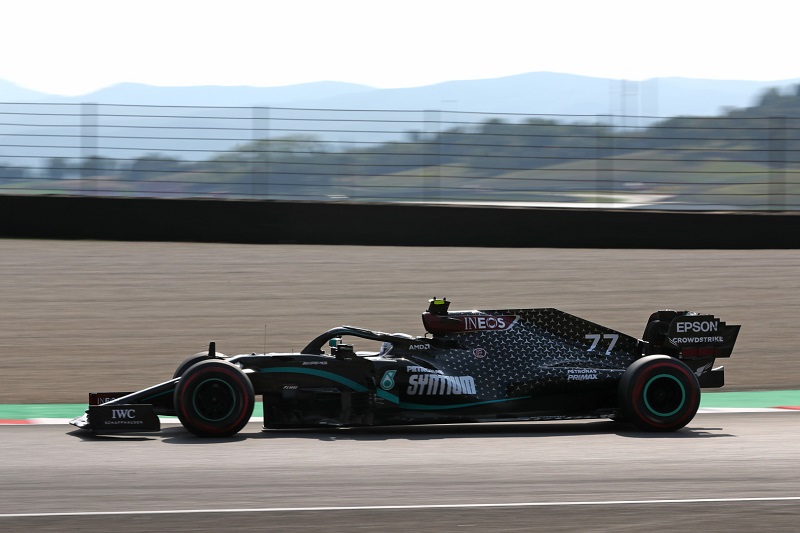 The Mercedes AMG Petronas Formula One Team continued to pace the field in final practice for the Tuscan Grand Prix on Saturday morning, but Max Verstappen ensured the German team did not have it all their own way by finishing in between Valtteri Bottas and Lewis Hamilton.

For a third time in as many sessions at the Autodromo Internazionale del Mugello, it was Bottas who topped the times with a lap of 1:16.530, the fastest lap of the weekend so far, but Aston Martin Red Bull Racing’s Verstappen left it late to set a time just 0.017 seconds slower.

This denied Mercedes a one-two at Mugello, with Hamilton falling to third, although the reigning World Champion was only 0.083 seconds off his team-mate and offering a hint of what could potentially be an exciting Qualifying session to come.

Over half a second down in fourth was BWT Racing Point Formula One Team’s Lance Stroll, who finished inside the top ten for the first time this weekend.  The Canadian, who finished on the podium for only the second time in his career last week, finished just ahead of Scuderia AlphaTauri Honda’s Pierre Gasly, last weekend’s surprise race winner.

Charles Leclerc ended seventh fastest in the leading Scuderia Ferrari machine, just behind the second Racing Point of Sergio Pérez, but the second Ferrari of Sebastian Vettel was only eighteenth fastest, not the ideal preparation for the Maranello-based team’s 1000th Grand Prix.

Alexander Albon will be disappointed not to be closer to team-mate Verstappen than he was, with the Thai driver almost a second down on the Dutchman in eighth, while the second AlphaTauri of Daniil Kvyat and Haas F1 Team’s Romain Grosjean completed the top ten.

The pace shown by the Renault DP World F1 Team on Friday appeared to disappear somewhat as Esteban Ocon ended eleventh fastest, with team-mate Daniel Ricciardo almost four-tenths of a second behind down in seventeenth.

Equally confused by their pace this weekend will be the McLaren F1 Team, who, after a second and fourth place finish last weekend at the Autodromo Nazionale Monza, will be scratching their heads to why they were only twelfth and nineteenth fastest, Carlos Sainz Jr. ahead of Lando Norris.

The Alfa Romeo Racing ORLEN team ended up thirteenth and fourteenth, Antonio Giovinazzi ahead of Kimi Räikkönen, while the second Haas of Kevin Magnussen was fifteenth.

Nicholas Latifi was an encouraging sixteenth for the Williams Racing team, ahead of the likes of Ricciardo, Vettel and Norris, but there was disappointment on the other side of the garage as George Russell failed to register a time after a braking issue was identified on his installation lap that meant he was resigned to just watching the last sixty minutes of practice before Qualifying.