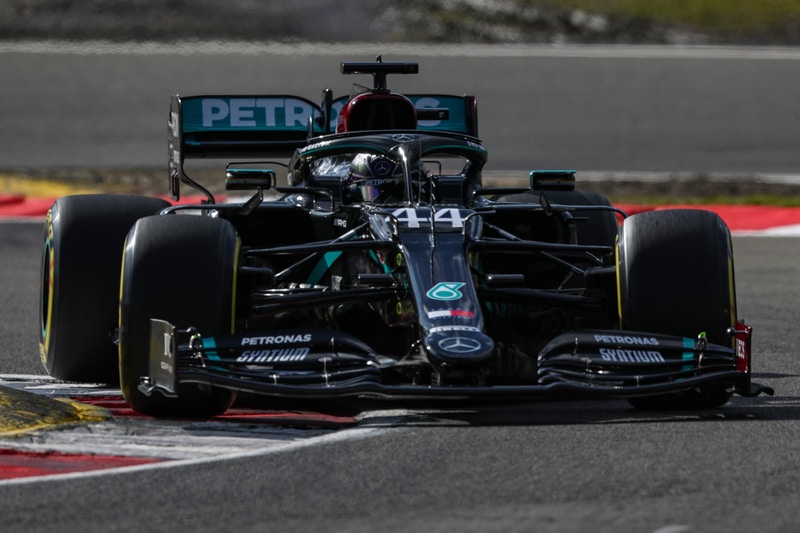 Lewis Hamilton eased to the ninety-first win of his career at the 2020 Eifel Grand Prix. With the seventh win of the season, the Briton joined the great Michael Schumacher on top of the Formula 1 leaderboard.

Max Verstappen finished in second position and took the extra point for the fastest lap on the final lap. Daniel Ricciardo clinched his first podium for the Renault DP World F1 Team.

The Finn was joined by his team-mate Hamilton on the first row. Verstappen and Charles Leclerc were on the second row. Alexander Albon and Ricciardo started from the third row. Esteban Ocon, Lando Norris, Sergio Pérez and Carlos Sainz started at the front of the grid.

Nico Hulkenberg replaced Lance Stroll for the BWT Racing Point Formula One team and started in twentieth and last position.

Hamilton had a better start and edged ahead of Bottas, but the Finn with an aggressive move on the outside regained first position. Albon dropped a place as Ricciardo made a good start.

Antonio Giovinazzi and Hulkenberg gained places at the start as they took eleventh and seventeenth positions. Bottas was 1.5 seconds ahead of Hamilton by the end of the first lap.

Ricciardo was soon within DRS-range of Charles Leclerc and pushed him hard to take fourth position. On lap 8, Albon was the first driver to pit and he took on the medium compound tyres and rejoined in last position.

By lap 9, Ricciardo had taken fourth position from Leclerc. The top three drivers were busy setting the fastest lap times of the race. There was a slight drizzle on the next lap which rendered the track conditions greasy. But the rain did not last long.

On Lap 11, Leclerc pitted for the medium compound tyres and rejoined in nineteenth position. Vettel had a spin that saw him pit on lap 13. On the same lap Bottas had a big lockup that saw Hamilton take the lead.

Bottas pitted and put on the medium compound tyres and rejoined in fourth position. In the meantime, George Russell and Kimi Räikkönen tangled at the back and the Finn was given a 10-second penalty for the incident. Russell had suffered a puncture that ended his race.

Bottas had overtaken Ricciardo to take third position. On lap 16, the Virtual Safety Car (VSC) was deployed to retrieve Russell’s car. Under the VSC, Hamilton and Verstappen pitted. The slower pit stop for Hamilton helped Verstappen close the gap to 1.5 seconds to the leader.

But Bottas in third position complained about losing power and fell to fifth position behind Norris and Pérez. On lap 19, Bottas’s race had ended, a sad blow to the Finn’s chances in the drivers’ championship.

After lap 22, Ocon and Albon retired on successive laps with reliability issues. Norris then started complaining about power unit issues and the McLaren F1 team through a stream of instructions from the pitwall tried to manage the problem.

Finally on lap 29 after an extended stint, Pérez and Sainz made their first pit stops. On the next lap Norris pitted and rejoined in fifth position behind Leclerc, but ahead of the Mexican.

On lap 35, Leclerc started the second set of pit stops as he pitted for the medium compound tyres. Ricciardo in third position was under pressure from Pérez on fresher tyres.

On lap 43, Norris’s futile battle ended as his power unit failed. The Safety Car was deployed which saw the leaders pit and rejoin in the same order. At the Safety Car restart at the end of lap 49, the order was Hamilton, Verstappen, Riccirado, Pérez, Sainz, Leclerc, Grosjean, Gasly, Hulkenberg and Giovinazzi.

Hamilton had a good start on cold soft compound tyres on the restart, even as Verstappen was under pressure from Ricciardo for second position. Hamilton soon opened up a 2.5 seconds gap to Verstappen. Gasly moved to sixth position ahead of Leclerc and Hulkenberg moved to eighth position.

Soon Hamilton took the chequered flag for the 91st win of his career. The win tied him with Schumacher for the most wins in Formula 1. In an emotional moment, Mick Schumacher presented Hamilton his father’s helmet.

Verstappen finished in second position and for good measure he took the extra point for the fastest lap on the final lap. Ricciardo clinched his first podium with the Renault team and the ever-smiling Australian finally accomplished his goal. Pérez finished in fourth position just behind Ricciardo. Sainz, Gasly and Leclerc finished behind the Mexican after well-crafted races.

Hulkenberg who took Stroll’s place at literally the last minute in qualification finished in a creditable eighth position. Grosjean took ninth position for his first points of the season. Giovinazzi finished tenth and took the final solitary point.

Formula 1 heads to the newly added Portuguese Grand Prix at the Autodromo Internacional do Algarve in two weeks time (October  23 to 25 2020).

Results of the 2020 Eifel Grand Prix: