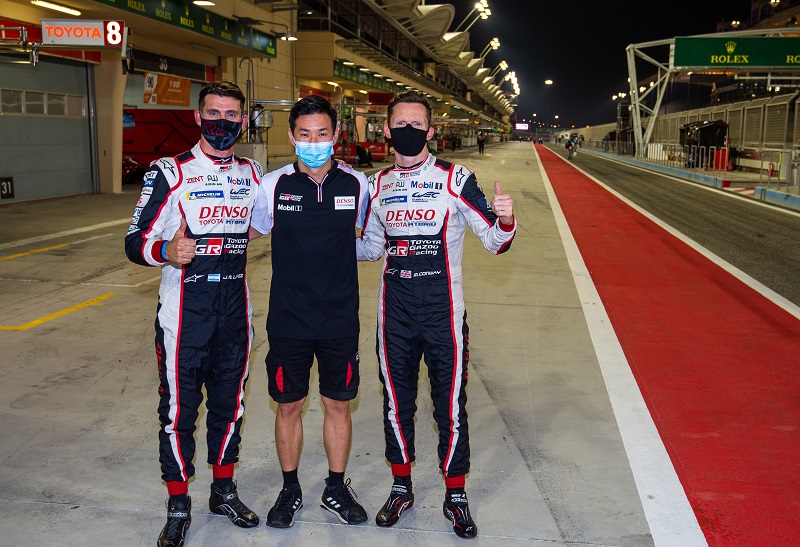 Holding a 0.54s pace per lap advantage on the sister car due to the LMP1 success ballast, Mike Conway and Jose Maria Lopez secured pole position for the 2019/20 FIA World Endurance Championship finale. All three manufacturers make an appearance in the top three of LM GTE Pro, with track limits lap deletion being the biggest contender in who claimed pole.

The #7 Toyota Gazoo Racing took provisional pole from the first round of qualifying, something the duo would not give up before the chequered flag. Conway’s 1:40.114 gave the #7 a 1.2s advantage over Brendon Hartley and Kazuki Nakajima in the #8 after the first lap times were set. It was up to Nakajima to close the gap, which he managed to do, but his time of a 1:41.774 was not enough to go faster than Lopez’s 1:41.381.

The Conway/Lopez average of 1:40.747 gave them pole by about seven tenths of a second, more than the half a second success ballast the #8 car is carrying.

The battle for LMP2 pole was much closer, with United Autosport‘s Phil Hanson only claiming the top spot in the closing moments of the session. Paul di Resta did what he had to to give the team provisional pole at the end of the first lap runners, but track violation from Hanson put that at risk. The 1:47.356 he had set was enough combined with di Resta’s time to give the team pole, but Hanson had to do it again.

Unable to go as fast, he set a 1:48.112, but it was still enough for the team to competitively take pole position in class by nearly eight tenths. The #37 Jackie Chan DC Racing car took second place in class, three tenths up on third-placed Signatech Alpine after a great lap from Gabriel Aubry during the second runs.

The vice champions battle in LMP2 will continue to be interesting as the race unfolds, as both the Racing Team Nederland and JOTA start next to each other. Advantage goes to the currently second place in class JOTA #38 car, who will start fourth ahead of the Dutch-backed entry.

It became a confusing post-event qualifying session in GTE Pro, with lap times being deleted and reinstated. The Porsche GT Team duo of Kevin Estre and Michael Christensen will start on GTE pole after the Dane had a previously deleted lap time reallowed.

During the session, the #92 was the car to beat, with Christensen laying down a great marker of 1:56.406 after the first runners. This gave the German team a two tenth advantage going into the second runners. However this was not the fastest time Christensen had set, with his fastest lap being deleted due to track limits violation.

Sorensen’s first lap was not enough to give the #95 Aston Martin Racing pole position, so he returned to the track once again and improved, doing enough to steal pole from the Porsche team in the final moments of track action. It was extremely close between the two cars, with the averages split by 0.06s at the chequered flag.

In a bizarre twist of events, after the session had ended the FIA decided to reinstate Christensen’s first lap time of 1:56.236, deeming that it had in fact not been in violation of track limits. This change meant that the Porsche team now had a 0.016s advantage on the #95 Aston Martin, and took pole position.

The championship contending AF Corse now starts behind its championship rival, with James Calado and Alessandro Pier Guidi securing third on the grid, making it three different manufacturers in the top three. Disappointingly for the second Aston Martin (also in championship contention with Maxime Martin) they start at the back of the GTE Pro field, with their 1:57.376 lap average.

It was an Aston Martin one-two in GTE Am, however, with the factory-backed #98 taking pole position ahead of class leaders TF Sport. Ross Gunn laid his marker in the sand, claiming provision pole after the first runs in competitive style. Paul Dalla Lana cemented the position with his lap, giving the car a 1:58.356 average lap time, about four tenths faster than Jonny Adam and Salih Yoluc in the #90 TF Sport. Kei Cozzolino and Bon Grimes claimed third in class with the #62 Red River Racing Ferrari.