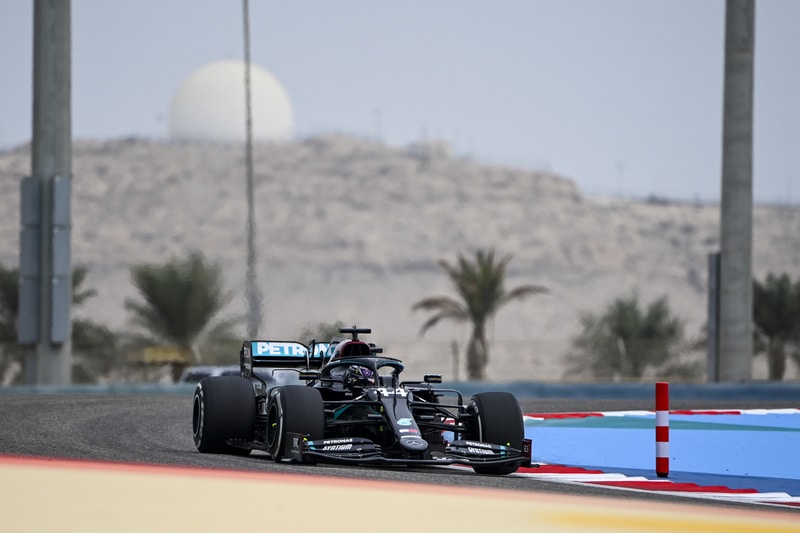 Lewis Hamilton finished on top of the time charts at the 2020 Bahrain Grand Prix at the Bahrain International Circuit at Sakhir, Bahrain in the second free practice session (FP2).

The fifteenth race of the 2020 FIA Formula 1 World Championship will take place under floodlights and will be the first of two races at this venue.

The Pirelli tyre choice for this race is the white-striped hard compound tyres (C2), yellow-striped medium compound tyres (C3), and red-striped soft compound tyres (C4). In the first thirty minutes of the session, the drivers were on the 2021 developmental tyres helping Pirelli collecting data.

Carlos Sainz set the initial pace with a timed lap time of 1m30.989s with Max Verstappen, Lando Norris and Esteban Ocon behind him on the time charts.

With an hour to go, the drivers bolted on the 2020 medium compound tyres (C3) and Verstappen went to the top of the time charts with a lap time of 1m29.318s. The lap was 1.610 seconds faster than the previous fastest lap.

At this point Bottas and Hamilton were at the bottom of the time charts with heavy fuel runs on the 2021 developmental tyres.

Sebastian Vettel was the first of the drivers to bolt on the soft compound tyres and took sixth position. With thirty-six minutes to go, Albon who is fighting to retain his seat with the Aston Martin Red Bull Racing team suffered a heavy crash coming out of the final turn.

When the session resumed, Bottas took second position behind Verstappen, just 0.018 seconds behind him. But Hamilton on his second run on the soft compound tyres went to the top of the time charts with a lap time of 1m28.971s.

So the session ended with Hamilton topping the time charts. Verstappen spilt the two Mercedes-AMG Petronas Formula One Team drivers. Bottas is in a fight with Verstappen for second position in the drivers’ championship and had to be content with third position.

Pérez was in fourth position and will lead the fight for his team to retain third position in the constructors’ championship. Daniel Ricciardo was in fifth position just 0.059 seconds behind Pérez.

Pierre Gasly was in sixth position ahead of Lando Norris who was the faster of the McLaren F1 drivers. Lance Stroll, Daniil Kvyat and the unfortunate Albon rounded off the top 10 positions.