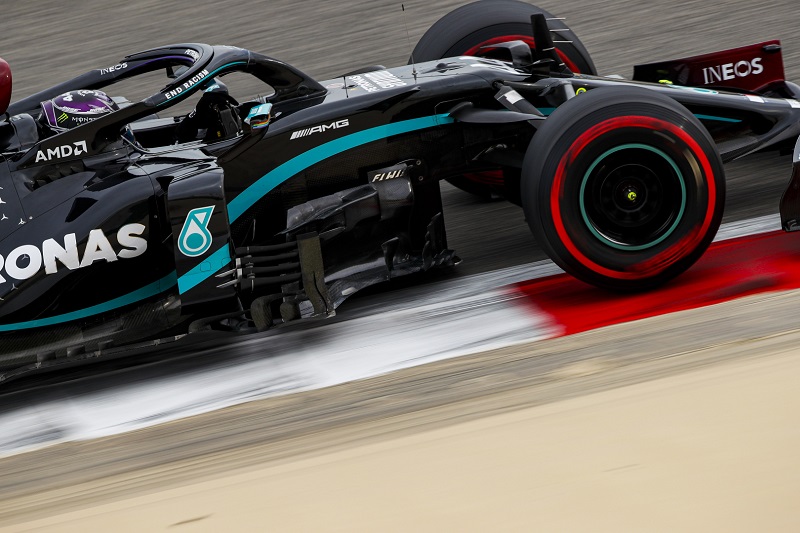 Toto Wolff says a front-row lock-out for the Bahrain Grand Prix marks a ‘good day in the office’ for the Mercedes AMG Petronas Formula One Team, but the Team Principal admits he is wary about the potential pace of Max Verstappen on race day.

Lewis Hamilton took his tenth pole position of the season and the ninety-eighth of his career on Saturday evening in the desert, with Valtteri Bottas joining his team-mate on the front row of the grid.  Bottas needed a second flying lap in Q3 to deny Verstappen a place on the front row.

Wolff, however, believes the tyre sets still available to the top three could give Verstappen and Aston Martin Red Bull Racing an advantage on Sunday, but Mercedes will be doing everything they can to secure another win.

“For a Saturday, it was a good day in the office,” reflected Wolff.  “We weren’t quite sure how much performance Verstappen really had left, so we’re happy we managed to lock out the front row.

“Tomorrow is going to be fairly tricky; Verstappen has a second Hard tyre and will most likely run a Medium-Hard-Hard strategy which, on paper, is the fastest strategy. But we’re going to do everything to put up a good fight.

“It’s going to be an exciting race and we’re looking forward to putting on a great show under the lights here in Bahrain.”

Shovlin says Mercedes have been battling with the car balance all weekend long in Bahrain, but everything appeared to come together when it mattered to ensure a fourteenth pole position in fifteen races for the ‘Silver Arrows’.

“A great result for the team and a seriously strong session by Lewis,” said Shovlin.  “He looked to have everything well under control from the first run, so congratulations to him.

“It’s not completely straightforward, we’ve been battling a bit with the car balance and throughout free practice we were struggling to get everything in the right window. However, in qualifying it came together nicely and we were able to find more and more time as the track gripped up.”

Turning his attention to race day, Shovlin also has concerns about the tyre allocations of other teams, with different strategies likely to play out across those inside the top ten, all of which made it through Q2 on the medium compound.

“We’re happy that we have both cars starting on the Medium tyre but we’re expecting to see some differences in the strategy tomorrow as a number of teams have carried an extra Hard tyre into their race allocation,” said Shovlin.

“Our long runs on Friday were distinctly average so we’ve made quite a few changes coming into today and hopefully we can keep the tyre temperatures under control during the race. It’s also a track where you can overtake, where degradation plays a big part in the strategy and where you can undercut from a long way back which should make for an exciting race.”