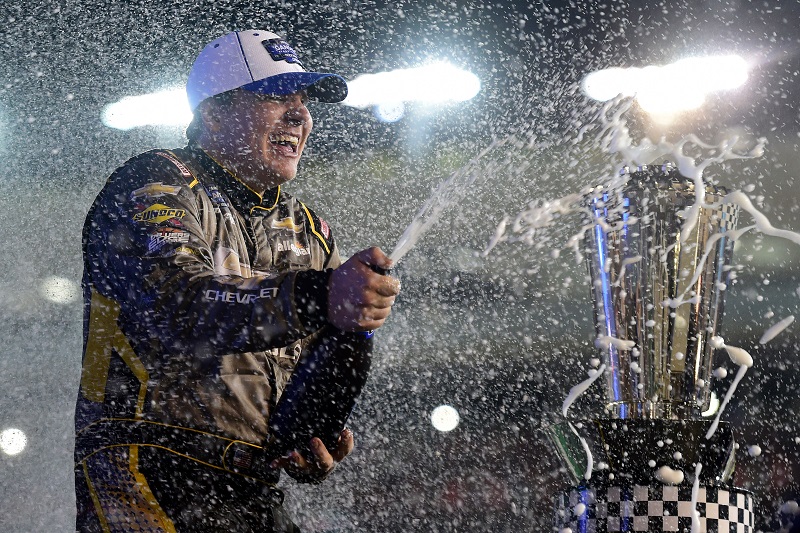 Creed, who won four races and was the top seed entering Phoenix, was joined in the Championship Round by GMS Racing team-mates Zane Smith and Brett Moffitt, and Grant Enfinger. Moffitt was the lone driver of the four to have a title, while Smith was a rookie and Enfinger locked himself in with a win the previous week. The GMS trio has varying experience in SST, with Creed being the winningest driver in series history.

Enfinger started on the pole ahead of Smith, while Creed and Moffitt were respectively third and fourth. Upon taking the lead, Smith would lead all 45 laps in the opening stage. Behind him, Creed and Moffitt battled for second throughout the segment while Enfinger fell back. Although lapped traffic slowed down Smith, he kept his advantage to the win ahead of Creed, Moffitt, and Enfinger. Other top-ten finishers in the stage were Enfinger’s ThorSport Racing team-mates Matt Crafton and Ben Rhodes, GMS’s Tyler Ankrum, Stewart Friesen, Christian Eckes, and Derek Kraus.

Creed was the first off pit road between stages to take the lead ahead of Moffitt. The former led until lap 75, when Moffitt made his move for the lead. Handling problems would plague Creed for the rest of the stage as Smith passed him for second. As with Stage #1, the second saw a GMS 1–2–3 with Moffitt ahead of Smith and Creed. Enfinger finished fifth with Rhodes in front. The rest of the top ten were Frisen, Ankrum, Raphaël Lessard, Eckes, and Sam Mayer. Ankrum and Mayer’s presence meant GMS had all five drivers in the stage’s top ten.

Moffitt, Smith, and Creed kept their positions out of the pits, while Enfinger was fourth. Enfinger suffered very slight damage when the field stacked up entering pit road, with Friesen bumping his rear. While Moffitt retained the lead as the final stage of the year began, Creed jumped to second. Creed began challenging Moffitt for the lead with an aggressive push that included diving far below the apron. On lap 104, Carson Hocevar brought out the first race-related caution of the night when he hit the outside wall on the backstretch. Hocevar, running his last race as a part-time driver before going full-time with Niece Motorsports in 2021, later explained the wreck was triggered by a broken right-rear brake caliper.

Enfinger pitted during the yellow and fell out of the top ten to twelfth for the restart.

The race resumed on lap 110 with Moffitt leading Creed. Six laps later, Rhodes entered the battle for second with Smith in tow. In the ten laps since the green, Enfinger cracked the top five; at the front, Moffitt’s lead over Creed grew to over a second.

As Enfinger passed Smith for fourth with twenty laps to go and Creed was mired in a battle with Rhodes, Moffitt ballooned his advantage to over two seconds. Enfinger eventually took third from Rhodes. The battle for second allowed Moffitt to continue expanding the margin, reaching over three seconds with 15 laps to go. Enfinger briefly took second two laps later, but a crossover move by Creed kept him in front.

With ten laps to go, Enfinger finally cleared Creed for second. It appeared Moffitt was set to ride off to victory until Dawson Cram made contact with Tanner Gray and wrecked with three laps to go, triggering overtime.

“This just shows how important every single person on the racetrack is,” tweeted Cup Series driver Matt DiBenedetto during the caution. “An incident a little ways back in the field could dictate who the champion is right now”.

Creed and Smith pitted for tyres, while Moffitt and Enfinger stayed out. Eckes and Friesen won the race off pit road with two tyres, while the Creed/Smith duo changed four and respectively dropped to eighth and ninth.

The field scrambled through the apron as overtime began, going five-wide at one point, with Chandler Smith slipping by the chaos to take the lead with Enfinger and Creed right behind. Creed, riding on fresher tyres, dove down the inside of Smith and Enfinger in the final turn to take the white flag. Creed would hold off Z. Smith to take the victory and the championship. Moffitt and Enfinger finished tenth and thirteenth, respectively.

Smith, the Rookie of the Year, said after the race that “it’s a disgusting feeling to finish second in this deal being that close. I get to go do it all again next year, so hopefully we’re one spot better. I wasn’t close enough to get to his (Creed’s) bumper or try to make a pass going through the dogleg. I cut it all the way. Was just hoping for the front end to grab. It just didn’t.”

“Longest run, most laps on a set of tires we had all night. You stay out like a sitting duck,” Moffitt commented. “It just is what it is. I have nothing to say really.”

Enfinger, the 2015 ARCA Menards Series champion, described 2020 as “just kind of a strange year, up-and-down year. Proud of our guys. Very, very disappointed with how tonight went. But just going to try not to hang our head too low because it was an overall a great year.”

It is Creed’s first NASCAR national series title and second in stock cars after his 2018 ARCA championship. Among those sending congratulations to the former off-road star were the Stadium Super Trucks, series creator and his mentor Robby Gordon, fellow SST drivers Bill Hynes, John Holtger, and Arie Luyendyk Jr., and SST tyre supplier Continental. Seven-time Cup Series champion Jimmie Johnson gave a shout-out on Saturday morning; like Creed, Johnson is a fellow Southern California native who also began his racing career in off-road, and Creed had paid tribute to the retiring great with a throwback paint scheme at Darlington in September modelled after his trophy truck.

“Good truck on the short run, just way too loose there as we went on,” said Creed in his post-race interview with FS1. “Caution comes out and me and Jeff (Stankiewicz, crew chief) are talking, I’m like, ‘We got nothing to lose.’

“[…] I pride myself on my restarts week in and week out and just nailed the restart right there. They were racing really hard. […] I was just driving this thing as hard as I can, I want this so bad.”

“He’s just learned how to race. His car control is amazing,” said GMS competition director Mike Beam about Creed. “He’s improved in every aspect of driving. Pit road, just everything. Him and Jeff working another season together, like I told him, Sheldon and Jeff, where Sheldon, he’s messed up enough stuff over the last year and a half, he did learn. He’s just become a student of the sport.

“Through our driver development program, you are a student of it. We teach you. It’s however hard you want to work. He’s worked hard at it. He knows he wants to get Cup racing.”

Creed is now the only champion under the Gander RV & Outdoors Truck Series name as the branding will shift back to the Camping World Truck Series at year’s end after just one season. He will return to the #2 GMS truck in 2021 for a title defense.

By Justin Nguyen
4 Mins read
For NASCAR’s Throwback Weekend at Darlington, Brad Keselowski, A.J. Allmendinger, John Hunter Nemechek will start on the poles. Ironically, Allmendinger is the only pole-sitter who will have a throwback livery.