2020 Rally Monza: Ogier on Brink of Seventh Title After Evans Crashes Out 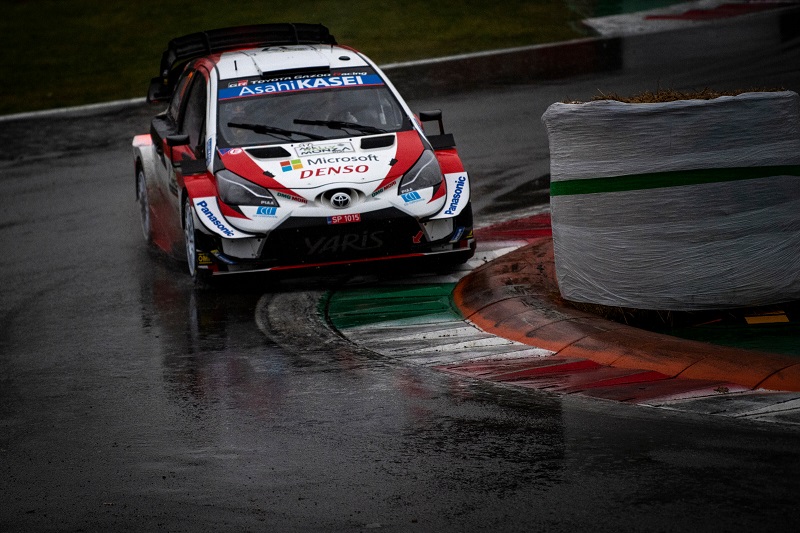 Toyota’s Sebastien Ogier is on the verge of claiming a seventh FIA World Rally Championship after teammate and series leader Elfyn Evans crashed out on Saturday afternoon.

The second full day of action was full of drama thanks to severe snowstorms on the hills above the Monza circuit where the crews headed on Saturday.

It was on stage 11 – the second passing through Gerosa – when Evans was caught out on a extremely slippery right hand corner.

He lost the back end of the car when breaking and ended up sliding down a bank and out of the rest of the day’s action.

This drama means Ogier, who got the better of overnight leader Dani Sordo firstly on the first stage of the day before again retaking the lead two stages later, will become champion if he remains out in front during Sunday’s three remaining stages.

Evans had been under pressure for most of the day before his accident and had managed to hold off Ott Tänak for third at the time by taking a fine stage win on stage nine, but will now need to rely on Ogier to drop a substantial amount of time tomorrow.

His teammate however now has a substantial 12.8 seconds lead over Sordo going into Sunday, but did have his lead trimmed by 2.6 seconds after the Hyundai man won the final stage of the day on the Monza Grand Prix circuit.

The snowy conditions had played havoc throughout Saturday, with Gus Greensmith and WRC class debutant Ole Chiristian Veiby being the first of the drivers to suffer.

Both crashed on the same corner on stage 10, with the M-Sport Ford man rolling his Fiesta WRC while Veiby ripped off a wheel.

This meant the stage was cancelled, before the final forest test was also stopped from going ahead after severe snowfall forced the organisers to deem the stage undrivable.

Tänak now sits third overall at the end of Saturday, 4.3 seconds further behind his Hyundai teammate, with Esapekka Lappi still running strongly in fourth despite struggling throughout the day.

The Finn had been just a second behind Sordo at the start of the day, but gradually lost out to the drivers behind on the slippery mountain stages.

Kalle Rovanperä sits fifth at the end of Saturday with Takamoto Katsuta the final WRC runner after continuing his comeback through the field.

Thierry Neuville had been set to return following his retirement yesterday, but the Hyundai team chose to delay his return to the action until Sunday in a bid to save the car ahead of the crucial Power Stage that could help his team win vital manufacturer points.

WRC2 has also seen a change in leader, with Mads Ostberg now the man in front.

He leapfrogged title rival Pontus Tidemand on the second stage of the day into second place, before leader Adrien Fourmaux suffered suspension damage on 11 after a spin.

The Frenchman returned late on Saturday to win the final stage of the day, but is over 20 minutes down on class leader Østberg.

WRC3 remains a close battle, although Emil Lindholm is now down in fourth after being overtaken by both Oliver Solberg and Jari Huttunen on the leaderboard.

Andreas Mikkelsen continues to remain out in front in the class, although is just 15.3 seconds ahead of Solberg.

Italian competitor Umberto Scandola, who had returned in the class following a crash yesterday, made the most of the treacherous conditions on the chaotic stage 11 and took an incredible overall stage win.

Finally in the Junior WRC, Tom Kristensson continues to have a dominant lead, added to by Martins Sesks who suffered a heavy crash early on Saturday.

The Swede has a near three-minute advantage over Fabrizio Zaldivar with Ruairi Bell and the returning Sami Pajari completing the leaderboard.

By Steven Batey
5 Mins read
The FIA have recently introduced a new rallying pyramid into the sport and this handy guide will explain what each class is all about.
FIA World Rally Championship

By Steven Batey
1 Mins read
Takamoto Katsuta will step up to a full campaign in the FIA World Rally Championship next season with Toyota GAZOO Racing.