Bottas disappointed after another weekend to forget in Sakhir 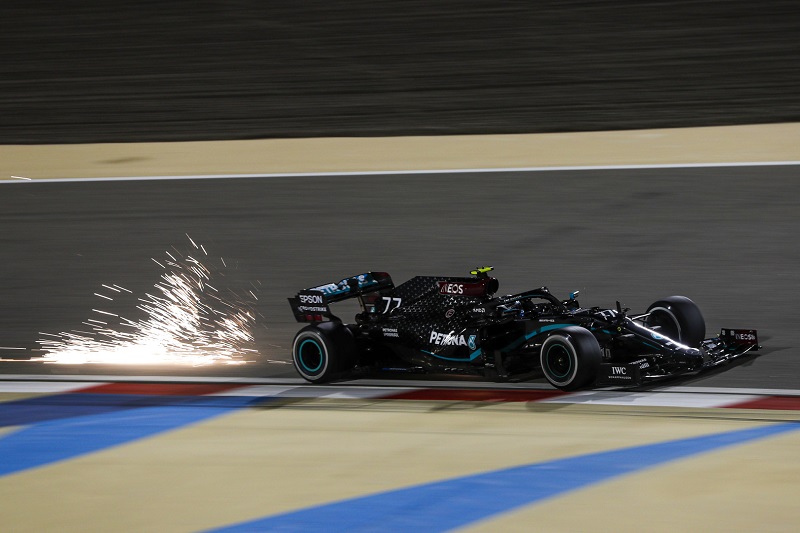 In what was one of the poorest performances of the hybrid-era by Mercedes-AMG Petronas F1 Team, Valtteri Bottas– the unluckiest man of the paddock- fell victim to yet another disappointing finish.

After starting from pole, Bottas dropped to second after temporary team-mate George Russell jumped him off the line. It only got worse from there as the Finn was condemned with a disastrously uncharacteristic pit stop for Mercedes that was well-over twenty seconds long which relegated him to eighth at the end of the race.

Valtteri rued his terrible luck on the day- saying that, without the Safety Car, he and George would’ve had a ‘nice battle towards the end.’ He highlighted the key issues that demoted him down to the rear of the field whilst remaining calm and collected. The Finn hopes for a more favourable Abu Dhabi Grand Prix to round-off what will be a season of missed potential.

“It’s been a really bad day for us. My start wasn’t great, I had some wheelspin and didn’t get a good getaway. George had a good start and could controlled the race from there. The beginning of my second stint looked quite promising, my pace was good and I started making up time on George. Without the Safety Car, I think George and I would have ended up having a nice battle towards the end.“

“When we pitted under the Safety Car, there was some kind of mix up with the tyres and I ended up. I’m still not quite sure what happened, but I ended up leaving the pits on the same set of old Hard tyres that I was on before. That’s obviously not an ideal stop; you lose positions and don’t get fresh rubber, which then made it very tricky at the Safety Car re-start and I lost even more positions on the old tyres.

Bottas was not bitter, though, and he continued to maintain his team spirit- citing that the team is ‘really bullet proof’ in scenarios such as this one.

“It’s always easy to criticise this afterwards but we’re all in this together and normally the team is really bullet proof in those situations. So we will take a good look at this internally and see what we can learn from it.“

As with all members of the paddock, Valtteri rounded off his statement by congratulating Russell after his exceptional performance in the race- although he will no doubt be looking over his shoulder after being overtaken multiple times by the stand-in.

“George did a great job today and was just really unfortunate – I think he could have otherwise won this race. Overall, it’s been a difficult day for the team, but we’ll be back on track in just a few days and I’ll give it everything to end the season on a high.”