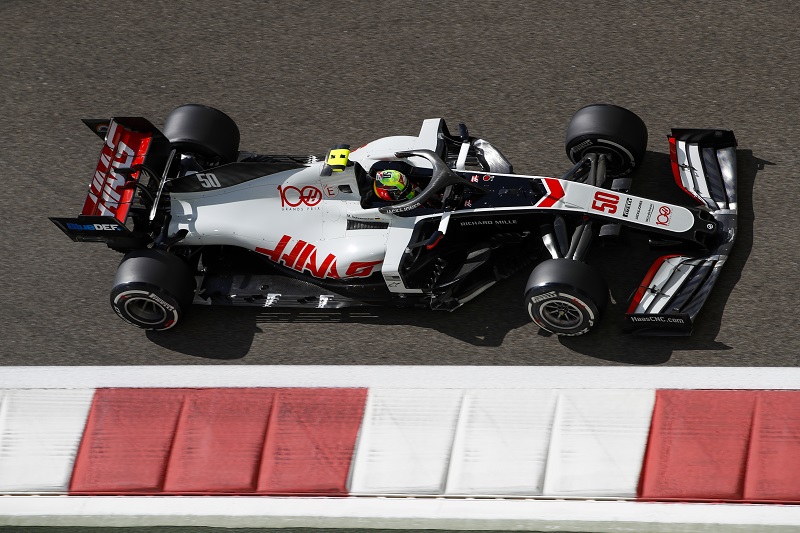 Mick Schumacher admitted the jump up into Formula 1 from FIA Formula 2 was ‘a big step’, but the German was happy with how his free practice run with the Haas F1 Team went at the Yas Marina Circuit on Friday.

Schumacher, the 2020 FIA Formula 2 champion and a member of the Ferrari Driver Academy, took over the car of Kevin Magnussen for the first session of the Abu Dhabi Grand Prix Weekend ahead of his full-time drive with Haas in 2021.

He completed twenty-three laps and ended eighteenth fastest, but despite his lowly position, he felt ‘really good’ inside the cockpit as he adapted to life as a fully-fledged Formula 1 driver.

“I would say things went pretty smoothly today in FP1,” said Schumacher.  “I was getting used to the car – it’s such a big step from Formula 2 up into Formula 1, but I’m happy everything went well.

“I felt comfortable with every switch and then every switch change in the car. I started off on the hardest compound and got to do a few consecutive laps which was really good, every lap really counts as you’re building up the pace and learning where you can push into each corner.

“It was really just a matter of time and getting the laps in. We then went onto the softer tyre, which was a huge jump – the difference in compound is something you really feel strongly. It was cool, really nice.

“I’m really looking forward to getting back into the car on Tuesday at the test.”

The session saw two legendary surnames alongside each other, with the Schumacher name being joined by a Fittipaldi, with Pietro Fittipaldi racing for a second consecutive weekend for Haas in place of the injured Romain Grosjean.

The Brazilian’s first session saw him running and testing a number of 2021 components so his lap times were not representative of his overall pace, although he ended only nineteenth in the evening session after suffering with yellow flags on what should have been his quickest run.

“In FP1 we were trying things for 2021, so it was interesting to see how the car handled,” said Fittipaldi.  “For FP2 we went back to our standard car for this weekend focusing on more performance running, as FP1 we had prioritized long runs. So that’s when I got my first feel for the car this weekend.

“It was a bit of a crazy session. I had a yellow flag on my push lap on the softs on low fuel. I had to back off and push again. Then when we were going to start our long run, I saw the car of Kimi (Raikkonen) going on fire, so that meant we couldn’t get all the laps we had wanted in. It was still a good session and I was able to understand a lot of things.

“We have to focus now and hopefully we can make a step forward tomorrow. Overall, I’ve arrived a lot more confident into this race weekend, whether I’m in traffic or running around other cars, even with my procedures – my driving in general I’m a lot more confident with. All that definitely helps.”

Kevin Magnussen, racing for the final time for Haas before he departs Formula 1 to race in the IMSA WeatherTech SportsCar Championship in 2021, returned to the car in second practice after giving Schumacher the chance to run in FP1, and he ended up sixteenth overall.

Despite being so low in the time sheets, Magnussen felt it was a relatively good day at the Yas Maria Circuit and he hopes for a positive final race weekend after four years with Haas.

“I’d say it was a decent FP2,” said Magnussen.  “I actually thought the car felt better than it has in recent weekends, so that was nice to see.

“Hopefully we can build on that and find a bit more performance on the soft tires. I think we were very strong on the mediums. We’ll see if there’s anything special we can do for the race on Sunday.

“First, we have to see how our pace is, we need to see if we’re in line with the pace of Alfa Romeo and quicker than Williams. I think it’s been a good day though, now we have to try and build on that.”

“It was quite an abnormal Friday for us” – Guenther Steiner

Guenther Steiner, the Team Principal at Haas, said it was an ‘abnormal’ Friday for the team compared to what they are used to, with three drivers running – two of them with only one race start between them.

Steiner praised the job Schumacher did in the first session, with the German staying out of trouble and getting a good number of laps on the board, while the team principal was also happy with how Fittipaldi worked through his programme that saw him testing components aimed for 2021.

“It was quite an abnormal Friday for us with three different drivers – one doing his first FP1 and the other taking part in just his second grand prix,” said Steiner.  “Let’s start with Mick (Schumacher), he did a good job this morning for his first time in our car.

“I think it’s fantastic to have Mick Schumacher participating in his first grand prix weekend in our car – that’s great for everyone at Haas F1. He did a solid job, he did what he was supposed to do, and he kept his nose clean. I think he learned a lot over the 90-minutes. We’re looking forward to Tuesday’s test with him.

“Pietro (Fittipaldi) started his second weekend with us. He worked on some testing in FP1 for 2021, so his lap times were not of any importance to us, we were working to get data. He had a lock-up in FP2, lost a few laps, but otherwise it was a solid performance.

“Finally, Kevin (Magnussen) – it was just as normal. He came back and did his job; it was pretty good considering he missed out in FP1. He surprised us and put in an extra lap at the end after the chequered to make sure he got as many laps in as he could under his belt.”