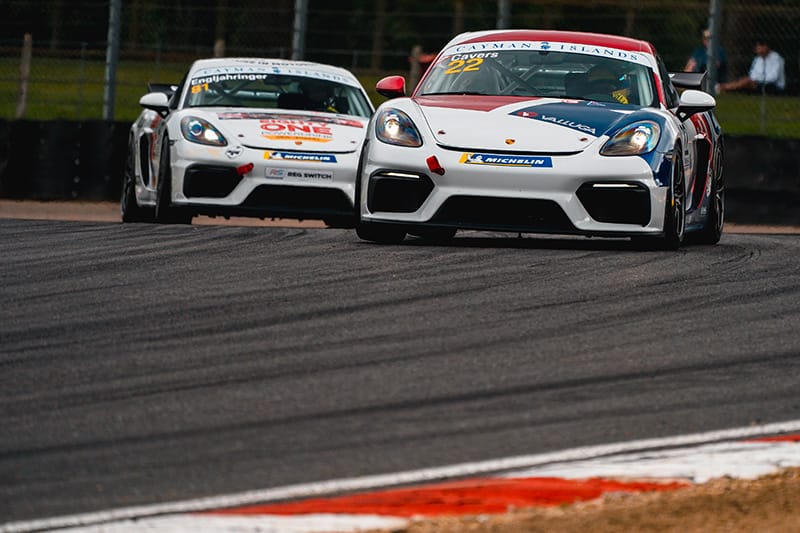 Carl Cavers will return to the Porsche Sprint Challenge GB for the 2021 season as he looks to build on a promising year that saw him claim two podium finishes in the Am class.

Porsche GB launched the new one-make series for the Porsche 718 Cayman GT4 Clubsport in 2020 to a backdrop of a global pandemic for a twelve-round series. Cavers was part of a two-car effort by Valluga alongside Ian Humphris (who would go on to take second place in the Am championship).

Cavers will once again team up with Valluga and team owner Benji Hetherington is looking forward to welcoming him back to the Silverstone-based squad.

“Great to have Carl back with us in 2021. He represents a model Valluga client in some respects, in that he came to us with limited racing experience.” said Hetherington.

“We put a programme together for him to progress and saw that showcased fantastically well in the 2020 season. He’s been working hard on the sim and in testing so far, and everything points towards another great season.”

Understandably Cavers cannot wait to get back on track and continue building on the experience he gained in 2020.

“I’m excited to be back on the grid in the Porsche Sprint Challenge with Valluga for the second season of the championship. I’m looking forward to building on the progress made last year and re-joining the Valluga Team – to do that was a decision I made in a heartbeat.” explained Cavers.

By Vince Pettit
2 Mins read
Slick tyre, mid-engine, more power… all of the challenges that face 2021 Ginetta GT Academy champion, Toby Trice as he moves into the Porsche Sprint Challenge GB for 2022.