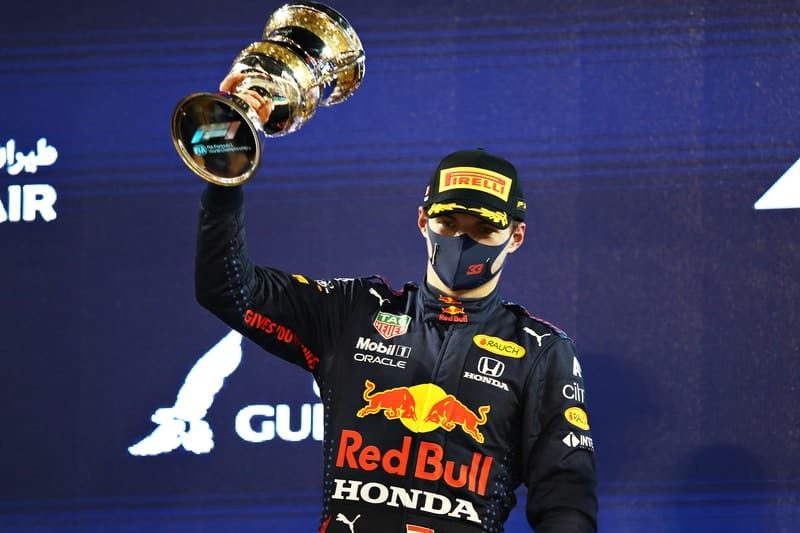 Under the floodlights of the Sakhir International Circuit in Bahrain the season opener of the 2021 FIA Formula One World Championship more than delivered, as Red Bull Racing Max Verstappen and Mercedes AMG Petronas Racing Team Lewis Hamilton endured an enthralling battle to kick start the 2021 season into life.

The world were finally gifted the dual we have all been asking for, as Verstappen and Hamilton went wheel to wheel on and off the circuit. Verstappen’s overtake for the lead deemed illegal by the FIA for exceeding track limits at Turn 4 resulted in him not only giving the place back with four laps to go, but also destroying his tyres and any hope for the win in the process.

Nevertheless the race favourite Verstappen demonstrated that this season won’t be a Mercedes domination and that Red Bull are well and truly up for the fight.

“We definitely made good steps forward today but it’s of course a shame not to get the win. We were having to manage a couple of issues throughout the race which I had to drive around so we will have to look into that but there are positives to take from today and the whole weekend,” said Verstappen.

“Mercedes did the undercut but we stuck to our strategy which was working fine, the problem is that with these cars, it’s so hard to pass and once you have that track position it’s pretty powerful. As soon as I got close enough to Lewis I had one shot and I just went outside of the track at Turn 4 so I gave the position back, but by then my tyres weren’t in a good state anymore to put the pressure on.”

“We have to look at the positives, we are taking the fight to Mercedes and I think that’s great, it’s good to start the season this way and we managed to score some good points for the Team. We will analyse what we can do better as there are always things you can improve and it’s great to get Honda’s 200th podium this weekend. Now it’s full focus on the next race.”

Pérez “Overall we can be pleased with today”

For Sergio Pérez it was an eventful evening that was almost over before it had even begun. The Red Bull crew looked on helplessly as Pérez’s RB16B came to a grinding halt on the formation lap as his Honda power unit cut out; thankfully for the Mexican the car sparked back into life and he managed to rejoin the grid, albeit from the pit-lane.

This moment seemed to be the end of the gremlins for Pérez who yet again mastered his way through the pack, almost reminiscent of his victory at the Sakhir GP last season. It was a stellar performance from Red Bull’s number two who showed no nerves as he battled his way through the midfield convincingly. It was a trademark performance from Pérez who crossed the line in an impressive fifth place.

Pérez has shown progression all through his debut weekend in the Red Bull, and has collected plenty of data to take into the Emilia Romagna Grand Prix in three weeks time.

“Considering my race almost didn’t happen today, I think overall we can be pleased with today and take away the positives as the pace was really good and the potential is there. On the formation lap, all of a sudden the car shut down and I was so close to jumping out but I stayed in and somehow the car got going again which was a miracle really.”

“That meant we had to start from the pit lane which wasn’t ideal but we managed to recover and I was just happy to complete the race and get that important mileage under my belt. It was really important to get that and of course it is a shame that Max didn’t win the race for the Team but it will come I’m sure and we will get there. We’ve got a lot of data to analyse now so that we understand everything and make sure we come back stronger at the next race in Imola.”