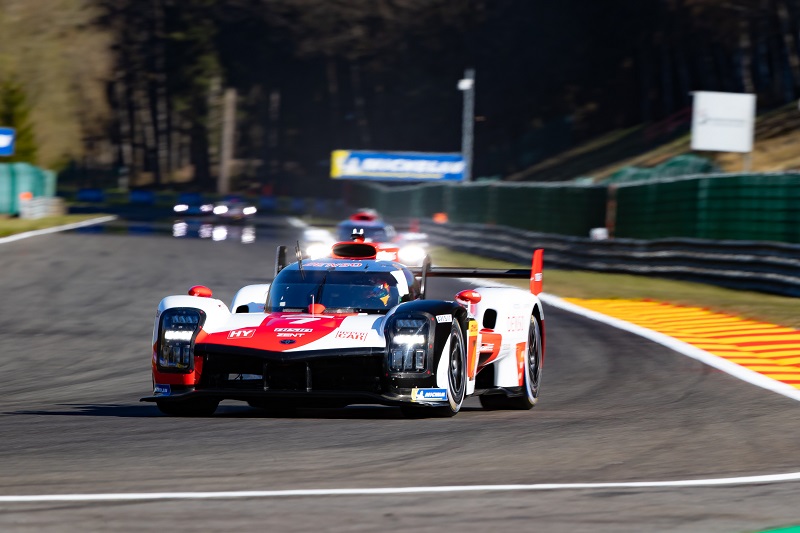 From struggling with the new car at the start of the week, Kamui Kobayashi has taken the first ever Hypercar pole position in the FIA World Endurance Championship for the 6 Hours of Spa-Francorchamps. The sister Toyota Gazoo Racing will start alongside the #7 in second as the Japanese team locked out the front row.

From the beginning of the LM qualifying session, it was clear the Toyotas had the speed to take pole. First laps saw advantage go to Kobayashi, whose 2:02.947 was half a second up on the sister car. None of the LMP2s could put a dent in the time whilst the sole LMP1 entry from Alpine Elf Matmut was stuck in the garage with mechanical issues.

With the new qualifying format in WEC for this season, it was up to one driver to set the pole position lap time for the car, so Kobyashi and Nakajima remained in the cars as they embarked on a second qualifying lap. Both improved, but it was Kobayashi’s 2:00.747 that blew away the competition. Nakajima stayed with his team mate, but was unable to close down the half a second advantage Kobayashi held over him, resulting in the Toyotas lining up for tomorrow’s race in the order they finished last year’s championship. After setting two lap times, both Toyotas returned to the garage and did not go back out whilst the other cars continued to circulate.

Nicolas Lapierre did manage to get the Alpine out on track, despite the issues at the start of the ten-minute session, but was only able to set a time 1.9s slower than the Toyotas. It was still an impressive feat. from the car that look as though it would not take part in qualifying, and the car will line up fourth for tomorrow’s race.

Once again, all eyes were on Filipe Alberquerque in the #22 United Autosports LMP2 car, who was on a mission to catch the Toyotas by the end of the session. He gave it his all, but still fell 1.6s short of the Japanese team at the chequered flag. Nyck de Vries also had his eyes set on class pole position, pushing his #26 G-Drive Racing to the max around the Circuit de Spa-Francorchamps. He was up on Alberquerque’s time as of the second sector of his final lap, but losing time in the last sector saw him not improve from his second place in class (fifth overall) starting position, half a second down.

The top three of LMP2, and top six overall, was rounded off by the #29 Racing Team Nederland, a car that has not topped many of the timing boards over the last couple of days but has always been racing near the front.

Records were smashed in LM GTE as Kevin Estre took pole position in GTE Pro by 1.1s. The lap time of 2:11.219 was too much for any of the other class competitors to close in on, and it was also a half a second improvement on the Frenchman’s banker lap.

The GTE qualifying session was disrupted with two red flag as both Christian Ried in the #77 Dempsey-Proton Racing and Egidio Perfetti in the #56 Team Project 1 had similar big impacts on the run through the Eau Rogue/Raidillon complex. Coming up the hill, both cars (on separate occasions) lost the rear and spun across the track having fast and heavy impact with the outside tyre barriers. Perfetti’s incident was during his out lap after the first red flag for Ried was withdrawn, as with just over six minutes left on the clock all drivers were pushing to get two more flying laps completed. Luckily, both drivers walked away without injury.

During the second red flag period, Porsche GT Team asked Estre if he wanted new tyres for the final runs, as the sister car had changed to fresh rubber. Estre refused, sticking with the plan Neel Jani and he had discussed with the engineers ahead of the session. It turned out to be the right call, as the slightly warn rubber allowed Estre to improve on his banker lap (already securely giving the #92 pole position) by half a second to set the 2:11.219.

Richard Lietz was in a tight battle with Miguel Molina for second on the grid, with the AF Corse Ferrari beating Lietz to the front row by 0.019s. Molina also suffered a lap time deletion for exceeding track limits, but still managed to secure the position to start between the two Porsches. Molina’s team mate Alessandro Pier Guidi in the #51 car will start fourth in class, whilst the Corvette Racing entry will start fifth, ahead of all the Am entries.

On his debut for Aston Martin, Ben Keating took pole position in GTE Am, making it an Aston Martin one-two with Paul Dalla Lana starting second as the British manufacturer seemed to find a surge of speed for qualifying. The Canadian had held onto provisional pole position throughout the session until Keating’s final lap saw him improve in all sectors, taking pole by almost a second. The sole remaining Dempsey-Proton Porsche took third in class in the hands of Alessio Picariello, who was seven tenths down on Dalla Lana’s time.

The 6 Hours of Spa-Francorchamps gets underway at 12:30 BST / 13:30 CEST tomorrow, and although qualifying may have been slightly predictable, race pace is a completely different game. The LMP2 cars may be in with a chance of challenging for the overall win.

Toyota Back On Top in Final WEC Practice Session

By Alice Holloway
2 Mins read
Toyota Gazoo Racing have finally made it back to the front of the field, locking out the top two in the final FIA World Endurance Championship practice session.