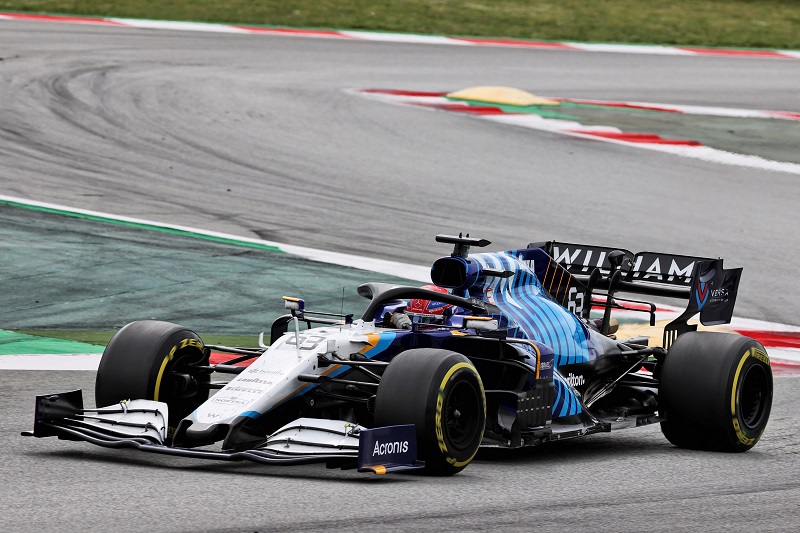 George Russell says the Williams Racing team can be satisfied with their performance during the Spanish Grand Prix despite the British racer finishing fourteenth on Sunday afternoon.

Russell found himself involved in the battle for tenth place and was challenging Fernando Alonso for that spot, only for him to be passed by Lance Stroll, Kimi Räikkönen, Sebastian Vettel and Pierre Gasly to drop him to fourteenth as he struggled with his tyres.

The Mercedes-Benz protégé says it was good to see Williams fighting for points on merit, with Russell admitting they were so close to taking that breakthrough result that will boost the whole team as they bid to pull themselves off the bottom of the championship standings.

“We have to be satisfied with the job we did today,” said Russell.  “The car in the race today felt good and I felt really confident, however the result doesn’t quite reflect that, as we started P15 and finished P14.

“We were on the one-stop and the guys around us were on the two-stop. I was battling with Fernando (Alonso) trying to pass him and the guys behind me were on the brand-new soft tyres which were much faster. As soon as I got passed by one, they all came past.

“The tyres were on the limit, I was on the limit and the car was on the limit. That was the maximum and I am really pleased we opted with that strategy as it gave us half a chance. We were so close to a much better result and hopefully we have more of these race weekends.

“To be battling there on merit was a great job.”

“As we expected, it was a challenging race out there” – Nicholas Latifi

Nicholas Latifi had a more challenging race in the second Williams, with the Canadian ending down in sixteenth position.

Latifi felt the FW43B felt the best it had all weekend long on Sunday, and it enabled him to finish ahead of both Uralkali Haas F1 Team drivers and Alonso, who made a late pit stop having dropped out of the points-paying positions.

“As we expected, it was a challenging race out there,” said Latifi.  “However, even though the pace isn’t where we want it to be, I’m happy that the most important session of the weekend was the one that the car felt best in.

“With a strong strategy and some good overtakes on track we also managed to get in front of both the Haas cars. I think we’re ending the weekend on a high, but we’ve also got quite a lot of homework to do before Monaco.”