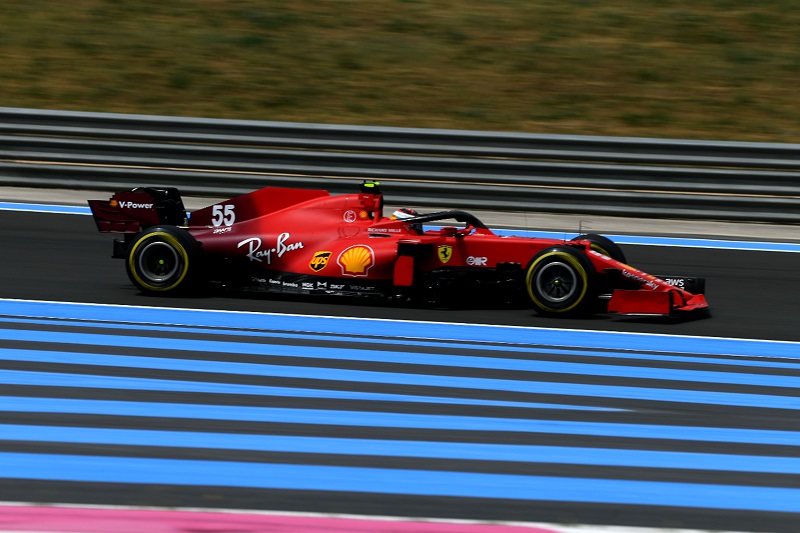 Carlos Sainz Jr. said Scuderia Ferrari struggled with tyre-wear throughout the weekend in France, and that carried into the race on Sunday as neither driver finished in the top ten.

The Spaniard driver suffered from degradation regardless of the compound, especially on the second stint with hard tyres that saw, and that saw Sainz begin to fall down the pecking order and out of the points.

Ultimately, Sainz finished seven seconds behind tenth-place Lance Stroll, with George Russell also closing in on the Ferrari driver. But Sainz is confident the team can address this issue ahead of the double header in Austria.

“It is clear that today we didn’t perform well and that we lacked pace,” Sainz said. “ Since the very beginning we really struggled with degradation and we carried that issue through the entire race, regardless of the compound.”

“Despite my best efforts, it was impossible to hold our initial position. We must analyse what happened, understand the issue and try to address it. If there is a team capable of doing that, it’s this one. A double header in Austria awaits and I’m sure we will bounce back.”

Charles Leclerc – “It was a very difficult race today”

Team-mate Charles Leclerc also experienced similar problems to Sainz after he finished in sixteenth and was lapped by the leading cars, in what Leclerc described as a ‘difficult’ race.

Leclerc, who started seventh, made an extra pit-stop near the end of the Grand Prix by putting on a fresher set of medium tyres, but continued to suffer heavy tyre-wear, and the Monegasque believes that is becoming a ‘weakness’ for the team.

“It was a very difficult race today. Both Carlos and I struggled on the two compounds we ran,” Leclerc said. “Towards the end, we made another stop for a fresh set of Mediums on my side, to see whether there was something we could do better.

“But it was the same as on the first stint: okay for three to four laps followed by heavy degradation. It is a big weakness and the main thing that we have to focus on now is understanding and improving for the future.”