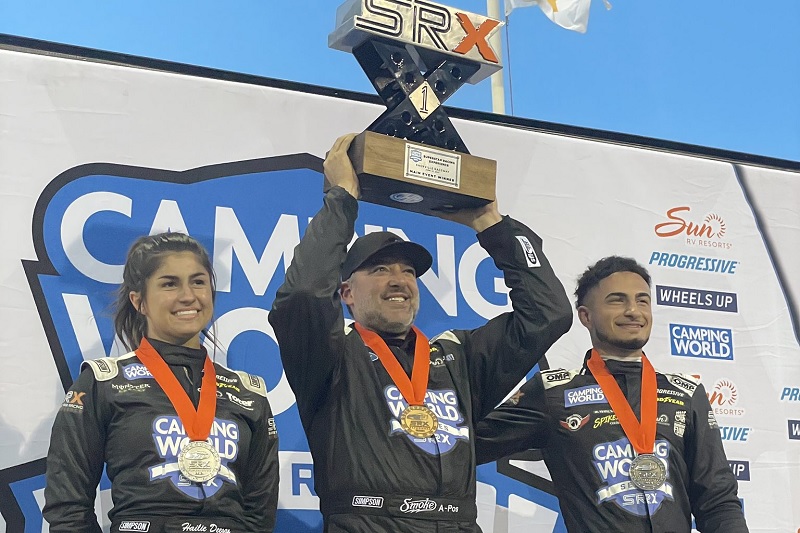 Tony Stewart, noted stock car and dirt track legend, can add winning in his own creation to his résumé after winning Saturday’s Camping World SRX Series race at Knoxville Raceway. The first dirt race for the young series, Stewart won a heat race before dominating the fifty-lap feature.

SRX co-founder Stewart led much of the first heat while NASCAR Camping World Truck Series rookie Hailie Deegan, who was making a cameo appearance a day after her main series’ race at Nashville in place of Tony Kanaan due to scheduling conflicts, moved into second. Paul Tracy hit the wall with five minutes remaining to produce a caution, and Stewart continued to lead to the heat win.

Michael Waltrip spun after contact with local track champion Brian Brown, resulting in him finishing last but starting first for Heat #2. Hélio Castroneves led much of the race before a caution came out as the race had run too many green-flag laps (yes, SRX has a mandated yellow flag whenever a race hits a certain number of consecutive laps under green). Tracy produced another caution when he spun with less than a minute remaining to set up a green-white-checker finish. Castroneves and Scott Bloomquist led the field to the restart, with the latter—one of the most decorated dirt racers of all time—winning out. In an odd twist, Castroneves fell back to seventh as he did not understand the concept of GWC conditions, causing him to assume the checkered flag waved in conjunction with the green; such a concept is not used in Castroneves’ IndyCar Series home, where races typically end under yellow in the event of a late caution.

Stewart and Ernie Francis Jr. occupied the front row to begin the Feature. After the previous week’s season opener saw the Feature starting lineup set by Heat #2 results, SRX tweaked the format to have the Feature’s grid established by average finish between the two heats.

After a debris caution on lap four, Bloomquist moved up to second on the ensuing restart while Bill Elliott fell off the pace. Brown and Willy T. Ribbs brought out cautions of their own due to spins.

Waltrip took the lead from Stewart on lap 12, only for Stewart to reclaim the position ten laps later. Bloomquist was clipped by Castroneves to produce a caution on lap 33, during which Elliott retired with fuel pressure issues that had also ended his season opener.

As Stewart continued to lead, Waltrip was passed by Francis and Deegan. The two tried to give chase but could not catch Stewart.

“I thought, ‘If Michael Waltrip beats me, I’m going to have to go to therapy.’,” quipped Stewart in Victory Lane.

The series will remain on dirt for next week’s race at Eldora Speedway, a track owned by Stewart.