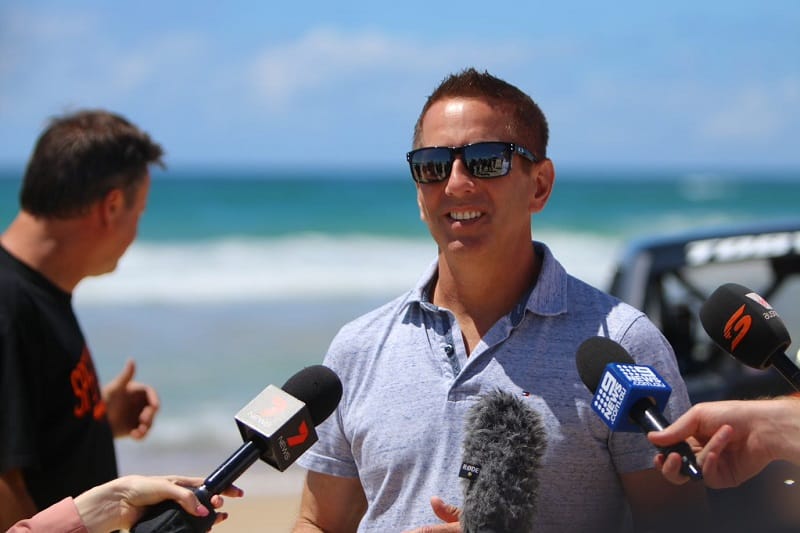 The Superstar Racing Experience (SRX) enlisted a trio of guest drivers ahead of the inaugural season this summer, announcing the additions of Greg Biffle, Scott Speed, and Scott Bloomquist to the special “ringer” car. While each of the three have their own decorated backgrounds, they all have stock car experience in NASCAR.

Biffle will race at Stafford Motor Speedway (12 June) and Slinger Speedway (10 July). He was a mainstay of the NASCAR Cup Series for fifteen years; from his début in 2002 to his final season in 2016, he won nineteen races and recorded a runner-up championship finish in 2005. He also has titles in the NASCAR Truck (2000) and what is now the Xfinity Series (2002), making him one of three drivers to have championships in both of NASCAR’s lower national series.

When he lost his longtime ride at Roush Fenway Racing after finishing twenty-third in the 2016 standings, Biffle began dabbling in other disciplines. In 2018 and 2019, he competed in the Stadium Super Trucks, during which he notched three podium finishes including a pair of runner-ups. Biffle also returned to the Truck Series in 2019, where he won in a one-off start at Texas for Kyle Busch Motorsports in his first series race since 2004. He also ran the 2020 Darlington Truck race, finishing nineteenth for GMS Racing.

Biffle’s entry was first inadvertently revealed by Michael Waltrip in an Instagram story in late April. The story was a selfie of Waltrip that focused on Bill Elliott, but Biffle was spotted in the background by fans.

Speed is scheduled to compete at Eldora Speedway (26 June) and Lucas Oil Raceway (3 July). The 38-year-old has raced in nearly every major four-wheel racing series available including Formula One, all three NASCAR national series, and rallycross. He helped spearhead Red Bull‘s involvement in NASCAR, which included finishing fifth in the 2008 ARCA championship and winning a Truck race that same year; he has four top tens in 118 career Cup starts.

Much of Speed’s racing success has come in rallycross. He won the Red Bull Global Rallycross title three times from 2015 to 2017, followed by the Americas Rallycross Championship in 2018.

Bloomquist will drive the ringer car at Knoxville Raceway on 19 June. He is one of the greatest late model dirt racers of all time with over 600 feature victories. 94 of those wins have come in the Lucas Oil Late Model Dirt Series, while 33 are in World of Outlaws. He was inducted into the National Dirt Late Model Hall of Fame in 2002.

His lone NASCAR start came in the 2013 Truck race at Eldora, where he finished twenty-fifth.

By Justin Nguyen
3 Mins read
A short course off-road racing series on a quarter-mile paved oval track intended for stock cars? That’s what SODA did at Slinger Speedway. While SODA is only in its second year, Slinger’s interest in an off-road race dates way back.
NASCAR

By Justin Nguyen
1 Mins read
Cole Williams will race in the Superstar Racing Experience at the Nashville Fairgrounds after winning a fan vote. He is a two-time Pro Late Model track champion.